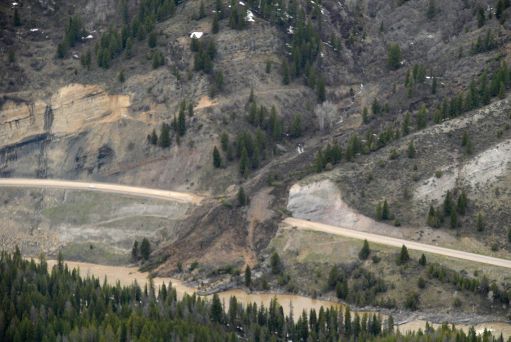 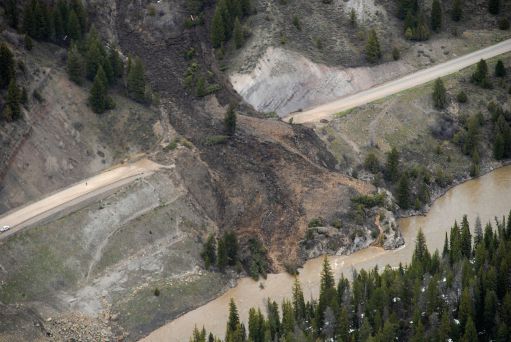 The Double Draw Landslide in May 2011 closed U.S. 26 for about a month after leaving an estimated 200,000 tons of debris on the highway.

More landslides occur along a 38-mile region of U.S. 26/287 in northwest Wyoming—close to Yellowstone National Park and along the Continental Divide—than any other stretch of roadway in the state. The instability is attributed to the topography, weather and proximity to Yellowstone, which sits atop an active volcano and contains more than half of the world’s geysers.

In late-summer 2019, the Wyoming Department of Transportation (WYDOT) procured high-resolution lidar data to assess three landslide-prone areas along 10 miles of this stretch near the Shoshone National Forest boundary, west of Dubois. The data produced dense, raw and bare-earth point clouds that created a detailed baseline that can be compared to models created from future acquisitions to determine the slide movement, volume and rate at which the earth is moving.

A second flight over approximately 1,080 acres (roughly 1.7 square miles) is planned for later in 2020. The 2019 data and imagery will be compared to this year’s collection to see if the ground has moved along the steep-terrain borders of U.S. 26 as it meanders through Togwotee Pass on its way to Grand Teton National Park.

According to John Goyen, WYDOT photogrammetry and surveys engineer, lidar was employed to address and mitigate landslides because of the rugged terrain, dense vegetation and size of the area of interest. Aerial photography was deemed inadequate, and traditional field surveying was impractical for this application.

“Aerial photography gets you pictures of vegetation, but the ground is obscured, and it’s tough to collect in the shadows,” says Goyen. “With lidar, it can strip away the above-ground vegetation and provide a bare-earth model. It shoots out so many points, it can go in between trees and shrubs and hit the ground surface. In this case, there are three reasons to use lidar: better coverage, a denser point cloud and more accuracy.”

Northwest Wyoming has mountainous terrain and soil that contains bentonitic clay, which was formed when volcanic ash settled out of the air from Greater Yellowstone eruptions millions of years ago. The annual snowfall at the top of Togwotee Pass exceeds 400 inches per year.

Bentonitic clay holds water and “behaves like Silly Putty,” according to WYDOT Geologist James Dahill. Regional landslides are most often due to these geologic conditions and are most common in April and May, when the soil is waterlogged following the snowmelt. These lead to “creeper” landslides in which a mountainous slope slides downhill gradually over time. Sudden, catastrophic landslides also occur in Wyoming.

In May 2011, for example, an event known as the Double Draw Landslide layered debris up to 50 feet deep across a 300-foot section of U.S. 26/89 south of Jackson, Wyo. During the month-long closure that followed, an average of more than 5,700 passenger and commercial vehicles were detoured daily along a 74-mile route into Idaho. Contractors removed more than 200,000 tons of earthen debris, and the highway had to be rebuilt in the damaged area before the thoroughfare could reopen. Dahill said a catastrophic landslide is “an expense no one wants to incur.”

“We don’t have a lot of catastrophic failures like you might see on the coast,” adds Dahill. “Most of our landslides lurch or creep down the mountain. A lot of it depends on the amount of precipitation we get and how quickly spring comes. It’s not only how much snow we get, but how fast it melts. When the temperatures rise quickly, the snow disappears quickly, and the soils get super-saturated and cannot support themselves, causing them to fail catastrophically.” 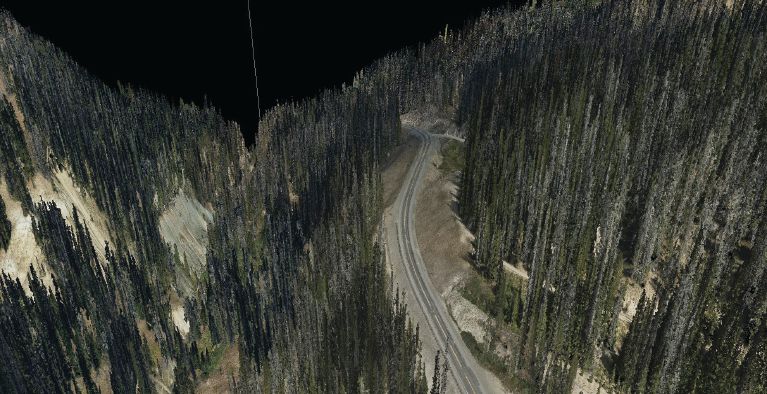 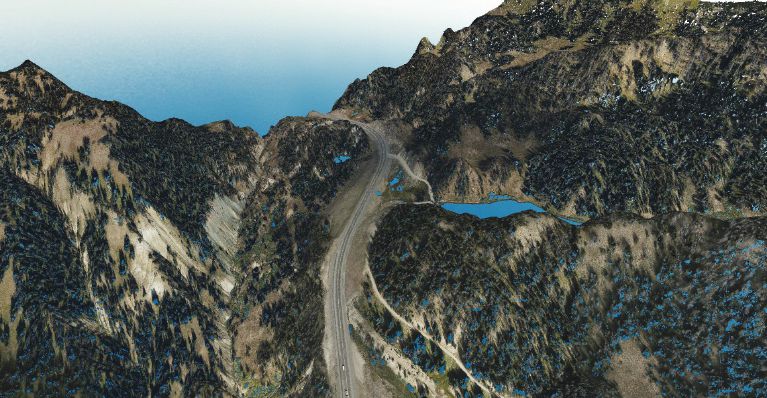 WYDOT works closely with local meteorologists on weather forecasts and has a system in place to monitor weather patterns in certain areas of the state, focusing on precipitation amounts and temperature changes. The department employs manned aircraft to collect aerial photography to monitor landslide activity in about 40 different locations around the state. Those areas are flown over and photographed once a year, and the images are used by geologists to analyze and compare to the previous year’s aerial imagery, according to Goyen. Occasionally, the photography is used to create “rough maps” for further analysis.

“Aerial photography is used in the statewide landslide-monitoring process, because it gives a rough idea of the topography,” notes Goyen. “Typically, over time you can determine what is moving and what is not moving.”

For several reasons, Dahill said it doesn’t make sense to send field surveyors out to collect the data needed for mapping this area along U.S. 26/287.

“Because of the terrain and size of the area, it doesn’t lend itself to putting boots on the ground,” adds Dahill. “Some of these landslides go from the top of mountain peaks to the bottom of valleys. One area, by all measurements, is a mile and a half wide along the highway. It’s every bit of a mile from the top of the mountain to the river valley—a vast area. With field surveying, you would likely miss some areas or over-survey areas that are not active.” 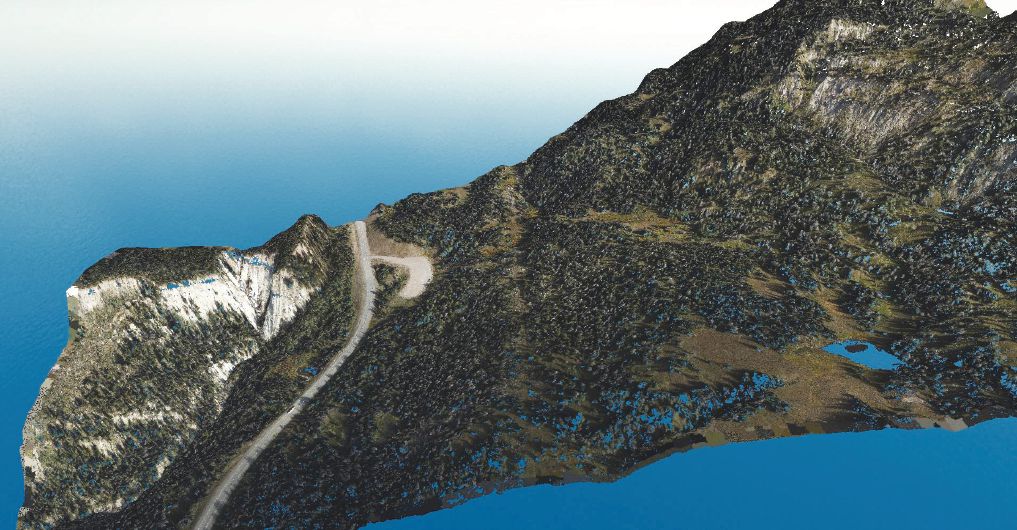 The contours of the landscape without trees blocking the view are shown in this bare-earth point cloud image looking north on U.S. 26 near Brooks Lake Creek Falls in Teton County, Wyo.

In 2019, WYDOT signed Woolpert to a two-year contract with the option of extending another three years to provide the lidar data that will enable geologists to peer through the tall pine, spruce and quaking Aspen trees and see the ground. For the first collection in fall 2019, Woolpert deployed a Cessna 404 Titan fitted with its Leica TerrainMapper remote-sensing system.

Flown at an altitude of 4,200 feet, the TerrainMapper penetrated the underbrush and forested canopy, mapping the varying peaks and valleys to within 3.5 centimeters of accuracy, according to WYDOT’s quality assurance and quality control measures. Those data were used to create a 3D colorized point cloud to provide features and details at the ground level at 50 to 60 points per meter, according to Radha Kandukuri, Woolpert photogrammetrist and phase manager.

Kandukuri said lidar technology has come a long way from when it was used to map large drainage areas and produce point clouds of only a few points per square meter.

“When you look at the data you get from the TerrainMapper, you can start to see actual features,” notes Kandukuri. “You can get more hard surfaces, more corners of features. You can see things that are well-defined where they never were in the past, because the point cloud wasn’t as dense. Mapping mountainous areas near busy highways to monitor rockfall threats and landslides is more viable now because the technology has improved drastically.”

Due to cloudy conditions, the Cessna flew for a total of 4.3 hours over two days to collect the lidar data and imagery, which amounted to 110 GB of information—40 GB of lidar data and 70 GB of aerial imagery. Processing and delivering the data took about 170 hours, including aerial triangulation, lidar calibration, classification and orthomosaics.

“The TerrainMapper is able to map through dense vegetation, and it’s able to provide much denser point clouds,” adds Kandukuri. “The imagery gives you the picture, but it also gives you the ability to colorize the lidar point cloud. You’re getting different densities, and you’re able to view the terrain in a color environment instead of just a black-and-white series of points.”

According to Dahill, by comparing TIN models of the same areas from two successive years’ worth of data collections, the geologists will be able to identify “hot and cold zones” that will help allocate resources where they’re needed.

WYDOT officials say slow-moving landslides are typically identified by road crews who report when the pavement on the highway has shifted or appears to be showing distress. Sometimes landslide activity can be spotted from aerial photography when a large dark repair patch on the highway is observed.

The TerrainMapper data, however, may give geologists an earlier indication of landslide activity. Once a “hot zone” of activity is identified, further monitoring and mitigation efforts get underway. Drilling investigations are conducted, and monitoring equipment called “slope indicators” are installed. The area then is monitored on a quarterly basis to determine the amount, rate and depth of the earth displacement or movement.

But even when a creeping landslide is identified, stopping or fixing it isn’t always realistic.

“When you’re dealing with a landslide that’s more than a mile and a half in width, we’re only going to be able to achieve marginal mitigation; we’ll just be able to manage it,” notes Dahill. “If we identify a hot zone, we may be able to change drainage patterns. We can build buttresses and move some material to change the topography a little bit, but that would only be a small portion of a mile-and-a-half landslide.”

Landslides can cause extensive damage to infrastructure, and WYDOT wants to do what it can to protect U.S. 26 and its investment in this important transportation asset.

From 2004 to 2011, the entire 38-mile corridor where landslides are most active in the state was rebuilt and improved. The work was done in five segments. Lanes were widened and shoulders were added, and the project was completed to meet current highway safety standards. Costs for the overall project exceeded $150 million. At $65 million, the 16-mile stretch targeted for the lidar data collection was the most expensive section to rebuild.

In the case of the Double Draw Landslide, rocks, trees, shrubs and other debris trapped in the sediment moved approximately 2,000 feet down the mountainside, across U.S. 26/89 and down into the Snake River. The soil continued to move for several days, and officials could do little except close the road and wait for it to stop.

The Wyoming Department of Transportation translated the lidar data provided by Woolpert into a variety of graphics, including a digital terrain model (top) as well as a triangulated irregular network (bottom) of the area near Wind River Lake.

According to Dahill, it can take a month for a landslide to stop moving and become safe enough to remove debris from the roadway. It also may take up to a month to secure an emergency contract with an excavating company. During these times, commercial trucking and the traveling public are significantly impacted by the highway’s closure, and there’s often political pressure to do whatever it takes to get it reopened.

“We need to consider the safety of the traveling public in all of our decisions,” notes Dahill. “In this area along U.S. 26/287, there are not a lot of homes or private lands, and alternative routes are limited. A detour could add hours and hundreds of miles to a trip.”

Dahill said the department is evaluating whether the TerrainMapper tool could replace aerial photography.

“We’ll use the data to make informed decisions on whether to fix or monitor an area more frequently, or whether we need to close the road while we take corrective actions,” adds Dahill.

Christopher Raml, PLS, is a geospatial project manager and senior associate at Woolpert who specializes in transportation and mapping projects for state, federal and private-sector clients; email: [email protected]