3D Laser Mapping’s StreetMapper Takes to the Railway with Terrametrix 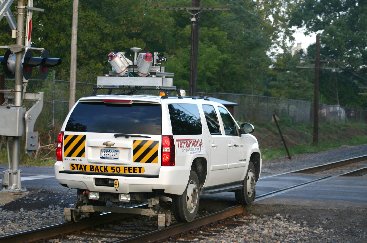 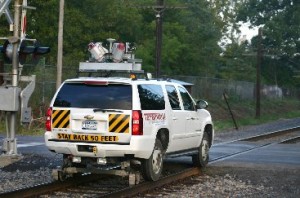 The world’s most accurate mobile mapping system StreetMapper has been used to collect design grade 3D data for a rail improvement project in New York.  Supplied by 3D Laser Mapping, StreetMapper uses a series of vehicle mounted laser scanners to collect data at speed and with minimal risk to survey personnel. Selected by engineering firm CHA and operated by service provider Terrametrix the StreetMapper system was chosen as a rapid and more cost effective alternative to a conventional track survey.

“During the field work to establish the survey control it became obvious that the combination of train schedules and project duration would not allow for a traditional track survey. We therefore determined that mobile laser scanning would be the optimal solution,” commented Mr Jody Lounsbury, 3D Laser Scanning Manager in CHA’s Survey Services Group. “Due to the complexity of the project and the need for design grade data we selected Terrametrix and their StreetMapper system as survey partners.”

Owned and operated by Terrametrix the StreetMapper system was chosen for speed of data collection, accuracy of survey data and ease of use and interoperability of the millions of individual measurements collected by the vehicle mounted laser scanners.  CHA combined the laser scan data with data from other sensors – including aerial mapping, static scanning and conventional survey.

“Survey day dawned and the true advantage of the StreetMapper system became apparent,” continued Lounsbury. “The ease with which the modular system of scanners, cameras, boxes, computers and wires was transferred from Terrametrix’s road vehicle to our clients Hi-Rail truck was amazing. As an experienced laser scanning professional I was also blown away to know the StreetMapper system was collecting all the data we required, in a single pass, while travelling at speeds of 40 miles per hour.”

“Our ultimate goal was to use the StreetMapper collected data in our in-house point cloud software. This has given us the ability to answer critical design questions on the project without having to revisit the field which has proved invaluable; saving time and increasing turnaround,” concluded Lounsbury.

Terrametrix has completed a number of rail mapping projects using the StreetMapper technology. These include the documentation of a particularly challenging 86 mile section of rail from Barstow to San Bernardino, California   to support a fiber optic design project, 3.13 miles of subway tunnel on the east coast for tunnel location and depth analysis to above grade design structures, documenting two tracks, catenaries and poles in a fill section in a major metropolitan area that had no access or room to place a static scanner and multiple two to four mile projects to create topographic drawings used for the design of additional trackage.

“The StreetMapper system has worked flawlessly performing on rail projects which is very important since track time is king for our rail clients” said Michael R. Frecks, President of Terrametrix, LLC.

3D Laser Mapping’s StreetMapper, which incorporates an advanced navigation system from IGI, has been specifically designed for the rapid 3D mapping of highways, railways, infrastructure and buildings.