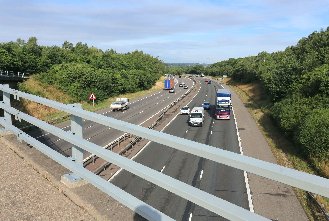 Highway’s technology and surveying company Yotta DCL has won a contract to provide surveys for Carillion on the UK’s M40 motorway, worth GBP 375,000. Yotta DCL were awarded the five year contract after being shortlisted based on experience and knowledge through an e-auction, which vetted survey providers bid against each other for the survey work. Carillion holds the Operation and Maintenance agreement with UK Highways, which is the M40 DBFO (design, build, finance and operate) company.

Yotta DCL will provide Carillion with Deflectograph, CHART, High Speed Road Monitor (HRM) and Skid Resistance surveys and resulting quality data. The company will survey 350-km of carriageway, including slip roads, running between Junction 1 and Junction 15 of the M40.

“To give us surety of service delivery, we took the decision to offer a five-year contract instead of the usual annual procurement. We are pleased that Yotta DCL won the e-auction as the company has provided surveys for us in previous years. Being a DBFO, it is an unusual contract to award because it runs much longer and so it is good to be working with a company that we trust. We have an excellent relationship with the company and it delivers its surveys and data on time. In addition, Yotta DCL’s after care is very good,” says Graham Farr, Asset Manager, Carillion.

The M40 DBFO is one of the most mature in the UK. It was established in 1997 and will run until 2027. UK Highways holds the concession for the M40 DBFO with Carillion being responsible for all operations and maintenance.

Deflectograph is a vehicle-based survey that measures the deflection of the road surface under a known load. The survey assess the structural condition and provides a wide range of data to help assess the residual life of the carriageway together with detailed information that guides strengthening or reconstruction schemes. CHART is a walked survey that is performed simultaneously with the deflectograph; it picks up fine detail that may otherwise be missed by the survey vehicle.

Yotta DCL uses one of its bespoke survey vehicles to perform the HRM machine survey. The survey collects a range of information such as longitudinal profile, texture, transverse profile, and cracking. Cracking data is processed from high-resolution images of the surface taken by a line-scanning camera. Skidding resistance surveys play an important part in helping Carillion tackle safety and inform policies going forwards to reduce road traffic incidents.

The five-year contract ensures surety of service for Carillion. Yotta DCL were awarded the contract after being shortlisted based on experience and knowledge through an e-auction, which vetted survey providers bid against one another for the survey work.