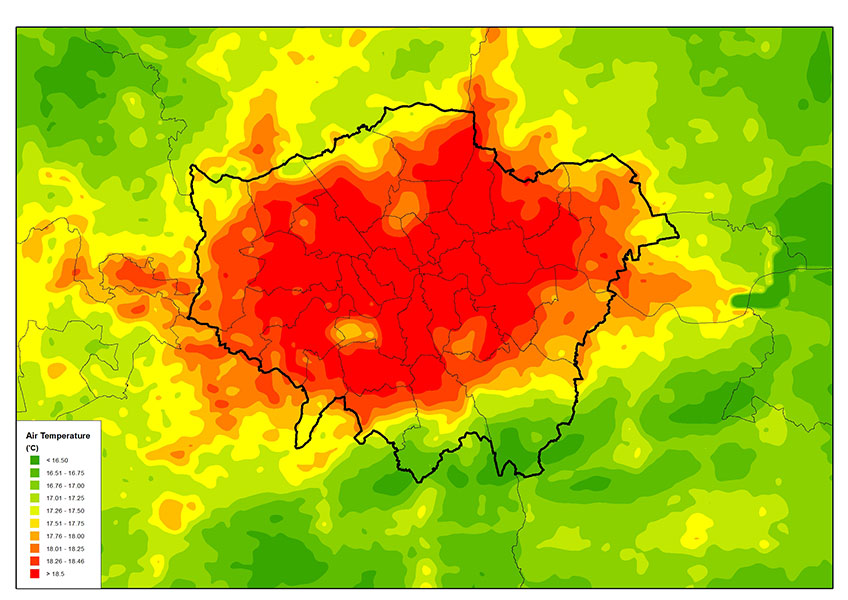 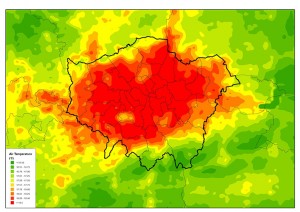 Following a project to visualise how high temperatures affect urban areas and communities, Arup is now undertaking further research to understand how this data can be used to help plan for and mitigate the risks of hot weather in cities.

The concept of cities heating up more than surrounding rural areas, known as the Urban Heat Island (UHI) effect, occurs because the materials used to construct buildings and streets in dense cityscapes, as well as waste heat and pollution from traffic, have a significant impact on the storage and release of heat. The heating up of urban areas, particularly those with a high density of buildings and low levels of trees and green space, is clearly depicted in these initial visualisations of London.

Using the latest data from the UK Space Agency and University College London (UCL), Arup has mapped both the land temperature and air temperatures for Greater London and the surrounding counties using Geographic Information Systems (GIS). Other key data has been provided by the London Climate Change Partnership, the Greater London Authority and the London Borough of Islington. The result is a series of striking images which show how both air and land temperatures in urban areas are significantly higher than their rural surroundings.

“London has recently experienced some very high temperatures that have affected the health and comfort of Londoners and patterns of economic activity. During a heat wave, the Urban Heat Island effect prevents the city from cooling down at night, and means people aren’t able to escape the heat, especially in areas without many trees or green spaces. The UHI affects cities across the globe and this is likely to become more pronounced due to climate change.”

“GIS technology is a great way to collate, analyse and visualise complex data for any location. In this instance, by recognising patterns and connections in the data, we can start to identify ‘hot spots’ and ‘cool spots’ in urban areas, so that we can adapt our city to better face hot weather now and in the future.”

The next stage of Arup’s Urban Heat Risk Mapping project aims to further visualise and explain correlations between land and air temperature, population density, areas of deprivation, building heights and land use. The study intends to inform the planning, design and management of residential areas, high streets and green spaces in London and other cities to reduce the potential risks of hot weather.