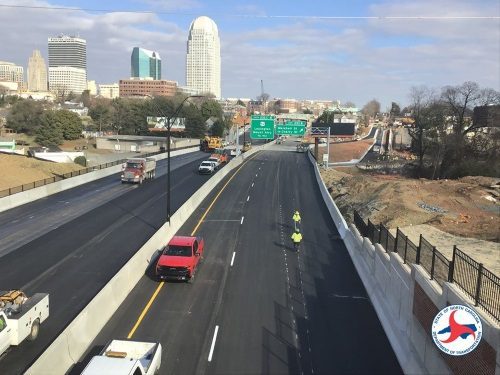 Steep reductions in motor vehicle travel due to the COVID-19 pandemic are adversely affecting state department of transportation budgets – to the point where some agencies are laying off workers and shelving planned transportation projects.

[Above photo by the NCDOT.]

The North Carolina Department of Transportation noted in an April 21 statement that as it is fully funded through the motor fuels tax, highway use tax and Department of Motor Vehicle fees, the traffic volume falloff is projected to cause at least a $300 million budget shortfall for agency in its current fiscal year, which ends June 30.

As a result, the NCDOT is laying off temporary and embedded consultants, suspending or decreasing many programs and services, instituting a hiring freeze – except for positions that impact public safety – and delaying work on all but about 50 major transportation projects scheduled over the course of the next 12 months.

The agency added that it “is in the process” of developing plans for potential furloughs as well as a reduction in force or RIF initiative, though it stressed those plans are not yet complete and “no decision has been made at this time” to enact them.

Meanwhile, in an April 17 letter to state legislators, Washington State Department of Transportation Secretary Roger Millar noted that “given the uncertainty of the duration of the pandemic and the lag in revenue reporting,” current traffic and ridership numbers suggest that his agency could expect a loss of revenue of as much as $100 million per month; approximately 38 percent of its average monthly transportation revenue collections.

Over the past six weeks, he said that overall state traffic volumes dropped 45 percent on average, with ferry ridership down 75 percent, transit ridership off 75 percent; and use of toll facilities down between 42 percent and 77 percent.

Mississippi is another state recording similar statistics. In a news story, the Mississippi Department of Transportation noted that the state’s motor fuel tax generated $305.5 million in revenue during its 2019 fiscal year and that collections during the current 2020 fiscal year were slightly outpacing last year’s collections before COVID-19 ground travel to a halt.

Missouri is currently estimating a 30 percent decline in state transportation revenues in the coming 18 months – which translates into a loss of approximately $925 million.

Patrick McKenna, director of the Missouri Department of Transportation and AASHTO’s 2019-2020 president, noted in a letter to his state’s Congressional delegation that his agency reduced its highway construction bid level for April by $46 million and delayed construction other agreements due to the falloff in transportation revenues – with additional consideration now being given to whether future lettings should be reduced or cancelled.

This precipitous nationwide decline in transportation revenues is renewing calls among state DOTs for a fiscal “backstop” from the federal government.

“Federal assistance is urgently needed in order to prevent major disruptions to our ability to operate and maintain our transportation system during this unprecedented emergency,” noted WSDOT’s Millar in his letter. “An infusion of federal funds will minimize and prevent cancellations and delays of projects as well as job losses both in the state DOT workforce and the private sector with which we contract. This is true for state DOTs across the country.”

That’s why the ASSHTO sent a letter to Congressional leadership on April 6 requesting the immediate emergency injection of $49.95 billion to offset an estimated 30 percent loss in state transportation revenues over the next 18 months.

“State DOTs are forecasting a significant reduction in state transportation revenues that will challenge their ability to maintain and operate our transportation system in a way that can support the COVID-19 response,” AASHTO’s Tymon explained.

Comments are disabled
NEXT ARTICLE
Executive Corner: Lost Value in M&A: A New Way to Create and Capture Value
April 27, 2020
PREVIOUS ARTICLE
Jacobs Will be Net Zero Carbon in 2020 and Carbon Negative by 2030
April 27, 2020