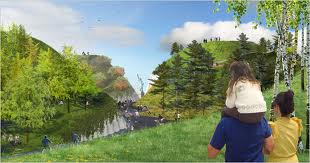 Mayor Michael R. Bloomberg today broke ground on The Hills, new public park land on Governors Island, and announced that a $15 million donation from Wendy and Eric Schmidt, in addition to several other commitments of private funding now totaling $36 million, officially launches The Trust for Governors Island’s capital campaign to privately fund the construction of The Hills. Made of recycled construction and fill materials, The Hills will rise 25 to 80 feet above sea level, and the summit of the tallest Hill will provide visitors with a 360-degree panorama of the Statue of Liberty, New York Harbor and the Lower Manhattan skyline. Mayor Bloomberg made the announcement on Governors Island and was joined by Wendy and Eric Schmidt, Trust for Governors Island Chair Ronay Menschel and President Leslie Koch, and Adriaan Geuze of West 8, landscape architects.

“Governors Island is at the center of our Administration’s efforts to revitalize our waterfront and create new and innovative green spaces along the water’s edge,” said Mayor Bloomberg. “The construction of these incredible Hills will continue the transformation of Governors Island and will create a landmark in New York Harbor that will be enjoyed for generations to come.”

“Eric and I are delighted to support the leadership of Mayor Bloomberg and the Trust for Governors Island in this unique project to revitalize this historic piece of New York Harbor,” said Wendy Schmidt.  “The greening of Governors Island is an extraordinary contribution to the greening of the city, and I can just imagine the excitement when visitors to The Hills find themselves discovering never-before-seen vistas of the Statue of Liberty and the New York City skyline. For someone who grew up in New Jersey in the 1970s when New York and other major cities were struggling to embrace the importance of environmental protection, projects like this one show me how far we have come.”

“Today’s announcement celebrates a public-private partnership that is responding to a once in a lifetime opportunity to transform a piece of New York,” said Ronay Menschel, Chair of The Trust for Governors Island. “With improved infrastructure, new park and public spaces and now these extraordinary Hills, Governors Island will be a unique resource, with a variety of uses, for New Yorkers and visitors to enjoy.”

“The Hills are the culmination of the new park and public spaces on Governors Island,” said Adriaan Geuze, lead designer of West 8. “They will provide visitors with the feeling of being immersed by nature and from the top of Outlook Hill will give a feeling of the sea and sky, against the City skyline, like nowhere else in the world.”

“With the addition of the Hills, visitors to Governors Island will have even more places to explore and even greater views from one of our city’s most unique and beautiful public parks,” said Assembly Speaker Sheldon Silver. “As the Assemblyman who represents Governors Island, I have worked tirelessly to help ensure that it continues to be such an invaluable resource for not only my Lower Manhattan neighbors but for visitors throughout the city and the world. I want to thank Wendy and Eric Schmidt for their extremely generous donation and I look forward to enjoying the newest feature of this incredible jewel in our Harbor.”

“The enormous potential of Governors Island is undeniable, and The Hills will be another exciting way for New Yorkers and visitors alike to enjoy the stunning views and historic sites that the island has to offer,” said Council Member Margaret Chin.

Mayor Bloomberg broke ground in May of 2012 on 30 acres of new parkland on Governors Island, funded as part of the Administration’s comprehensive capital program to bring Governors Island’s infrastructure into the 21st century and create new park spaces.  This first phase of park, which includes Hammock Grove, Play Lawn and Liggett Terrace is on schedule to be completed in 2013.  The Hills add another 11 acres of public park space to the 30 acres previously announced as well as the green spaces in the Island’s National Historic District which have also been enhanced in the last year.

To date, individuals and foundations have been made commitments totaling $36 million to meet the total construction cost of The Hills, which is $70 million. In addition to the Schmidts’ gift, leadership gifts have been pledged by Bloomberg Philanthropies, the Carson Family Charitable Trust, Charina Endowment Fund, The Lauder Foundation, and Joan H. Tisch and Family and the Tiffany & Co Foundation.

Drawing from the precedent of Frederick Law Olmsted’s creation of manmade topography in Central Park, The Hills pay homage to the lush, hilly landscapes of pre-colonial Manhattan, and fortify the Island’s resiliency in the face of rising sea levels. There are four Hills. Grassy Hill will provide a 25 foot high gentle slope overlooking the Island’s new and historic landscapes and the Manhattan skyline. Slide Hill (40 feet high), will host 4 slides for children and families nestled in shady trees. The 60 foot high Discovery Hill will be the setting for the convergence of nature and art with site-specific art along its pathways. Outlook Hill, rising 80 feet above the Island,  will be New York City’s newest destination as visitors access its winding path to enjoy breathtaking views of the Statue of Liberty and New York Harbor. With today’s groundbreaking, all Hills begin to rise this year. They are scheduled to open to the public in the spring of 2015.

The Hills are the culminating feature of the Governors Island Park and Public Space Master Plan, designed by the landscape architecture firm West 8 and released to the public in May, 2010.  West 8 is an internationally acclaimed firm based in Rotterdam that has designed award winning park and public spaces located around the world. The master plan may be accessed at govislandpark.com.

Governors Island is open to the public on Saturdays and Sundays through September 29, via free ferries from Manhattan and Brooklyn and the East River Ferry. Island visitors can see progress on the park and public spaces from the viewing platform at Liggett Arch or on free hard-hat tours that are offered on select weekends. Visit govisland.com for ferry, event and construction tour schedules.