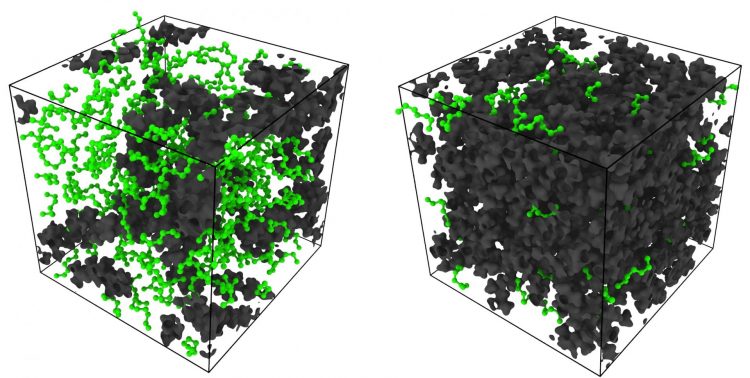 HOUSTON – Rice University engineers have put to rest a long-held theory about the detection of oil and gas that hides inside the nanoscale pores of shale formations.

The Rice researchers determined that puzzling indicators from nuclear magnetic resonance (NMR) tools are not due, as thought, to the paramagnetic properties of the rock but solely to the size of the space that traps the petrochemicals.

The team expects the discovery will lead to better interpretation of NMR logs by the oil and gas industry, especially in unconventional shale formations.

The study’s authors — senior investigators Dilip Asthagiri, Philip Singer, George Hirasaki and Walter Chapman and graduate student Arjun Valiya Parambathu, all of the Brown School of Engineering’s Department of Chemical and Biomolecular Engineering — have been at the forefront in using atomistic simulations to refine how to interpret NMR relaxation behavior.

Their paper in the Journal of Physical Chemistry B builds on earlier work from the same group and elucidates the critical role of molecular confinement on NMR relaxation response.

NMR relaxation is an important tool to nondestructively measure the dynamics of molecules in porous materials. NMR is commonly used to detect diseased tissues in the human body, but is also employed to help extract oil and gas safely and economically by characterizing sedimentary rocks to see if they contain hydrocarbons.

NMR manipulates the nuclear magnetic moments of hydrogen nuclei by applying external magnetic fields and measuring the time it takes for the moments to “relax” back to equilibrium. Because relaxation times differ depending on the molecule and its environment, the information gathered by NMR, specifically the relaxation times known as T1 and T2, can help identify whether a molecule is gas, oil or water and the size of the pores that contain them.

A puzzle in the field has been to explain the large T1/T2 ratio of light hydrocarbons confined in such nanoporous material as kerogen or bitumen (aka asphalt) and the mechanism behind NMR surface relaxation, a phenomenon that emerges when formerly free molecules are adjacent to the surfaces that confine them.

Specifically, the researchers note, the T1/T2 ratio of hydrocarbons in kerogen is found to be much larger than the T1/T2 ratio of water in clays. While this contrast in T1/T2 has potential for predicting hydrocarbon reserves in unconventional shale formations, the fundamental mechanism behind it remained elusive.

The conventional explanation of the large T1/T2 ratio in kerogen invoked the physics of paramagnetism that dictate how materials respond to magnetic fields.

Through large-scale atomistic simulations by Valiya Parambathu, Chapman and Asthagiri and experiments by Singer and Hirasaki, the Rice team showed that explanation is not correct.

In the study, the team showed instead that the large T1/T2 ratio emerges as a consequence of confining the hydrocarbon in a tight space.

“In physical terms, under strong confinement, the correlation times of the molecular motions get longer,” Asthagiri said.

“These longer correlation times result in faster NMR relaxation — that is shorter T1 and T2 times,” Singer added. “This effect is more pronounced for T2 than it is for T1, which results in a large T1/T2 ratio.”

Chapman noted the team is also interested in exploring ideas presented in the paper in the context of medical MRI.

Chevron, the Rice University Consortium on Processes in Porous Media and the American Chemical Society Petroleum Research Fund supported the research. Computing time and support were provided by the National Energy Research Scientific Computing Center, which is supported by the Office of Science of the U.S. Department of Energy and the Texas Advanced Computing Center at the University of Texas at Austin.

This news release can be found online at https://news.rice.edu/2020/04/13/tight-spaces-tip-presence-of-petrochemicals/