/ Articles / Thoughts from Engineers: The Food Industry Has a Major Impact on Water Resources

Thoughts from Engineers: The Food Industry Has a Major Impact on Water Resources

Cheesemaking is a bonafide American industry that generates some $50 billion in revenue every year. In the regions of New York where dairy farms dominate, small-town communities and cheese production have coexisted peacefully through the years.

A longtime American favorite, Philadelphia Cream Cheese has been produced in Lowville, N.Y., for nearly 40 years. A new plant became operational in 2017 and expanded Kraft Heinz’s (parent company of Philadelphia Cream Cheese) production line to also include string cheese. All seemed to be going well until the plant’s additional water needs drained the city’s reservoirs and forced all parties to reevaluate water use. Not just a matter of withdrawals, shifts in rainfall patterns and other effects of climate change have brought an element of unpredictability to water supplies across the United States.

Negotiations relating to water use in traditionally water-rich regions are on the upswing. As patterns of rainfall change and water availability become more irregular, competing demands over water become commonplace. 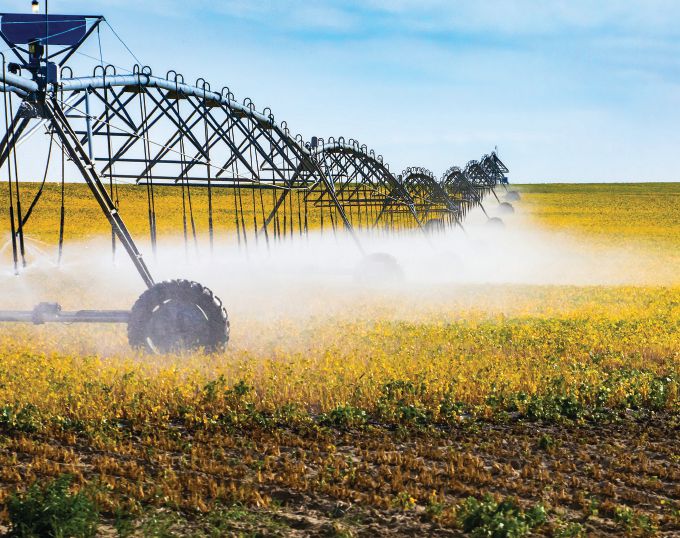 A Closer Look at the Water Footprint of Cheese

Roughly 75 to 85 percent of water resources in the United States are used in the production of food. A review of water use by specific industries shows that one of the most water-consumptive is agriculture. The production of meat is the most water-intensive (1,800 gallons of water to produce a pound of beef), followed by dairy products, and water-intensive crops such as almonds and avocados. A “water footprint” considers the quantity of water used to produce a particular good (bit.ly/3bXcuCC).

Crops for feed need irrigation, and huge quantities of water are necessary throughout the life of an animal. In the case of cheesemaking, water is needed to support all stages of life in the cows that produce milk. Water is used at multiple points in the process of cheese production, from the pasteurization process to the cleaning of equipment and delivery trucks. Ultimately, nearly 400 gallons of water are needed to produce a pound of cheese.

The beginnings of the drama in Lowville unfolded innocently enough. When Kraft Heinz announced it was going to expand the existing plant to include the production of string cheese, Lowville welcomed the news.

Shortly after becoming active, however, it became clear the plant was withdrawing more water than had been estimated (on.wsj.com/39Wqafg). Kraft Heinz projected it would withdraw at most 900,000 gallons per day for plant processes; once operational, it became clear the plant withdrew at least 1 million gallons on a daily basis. Competition with the broader community for water during times of high use soon led to restrictions for town residents, rationing and fines. A series of dry months with below-average rainfall further compounded the problem.

A Battle Over Water in Wisconsin

In 2017, battle lines were drawn between Wisconsin’s potato growers and other interests as Wisconsin’s legislature debated a new law to regulate high-capacity wells. To date, there are more than 12,000 high-capacity wells in operation in Wisconsin. A collection of agricultural groups representing potato growers, the soybean sector and other crops claimed that their industries—all highly dependent on water—would be adversely affected if restrictions on existing permits were enforced.

Groups advocating for more-stringent review of existing high-capacity well permits and many residents in this part of Wisconsin were alarmed by diminished stream flows and lakes that were receding several feet per year. The Central Sands region’s ability to support intensive agricultural use in the long run is the looming question. Lowville’s case suggests water supply is anything but certain; local conditions can change within a matter of years.

News events and headlines about environmental crises, water scarcity and sustainable practices are not lost on the stock market or corporate stakeholders. Worldwide protests of Coca Cola’s water use in India led to a shutdown of operations.

Take note of the shift in tone on corporate websites: General Mills outlines its commitment to “water sustainability” and intends to “engage suppliers as partners in responsible water stewardship.” Also, the company will perform a “deep dive analysis of priority watersheds to understand challenges and opportunities, including positive and negative impact of General Mills operations.” Kraft Heinz also plugs the corporation’s environmental mission “to grow a better world.” Under a subheading on sustainable business practices, the corporate website refers to a “wide range of actions extending from recycling water and installing new technologies to upgrading water treatment plants.”

Whether a company actually follows through on mission and lofty policy statements is a matter for discussion. We can’t limit the forage needed to grow a cow, but we can introduce water-saving efficiencies elsewhere in the production process. The town of Lowville and Kraft Heinz worked out new terms of operation. Kraft Heinz introduced additional water efficiencies into the plant’s operations. Greater use was made of recycled water, and the company shifted its processing schedule to avoid conflict with the town’s hours of peak water use. The world will benefit from smaller water footprints and changes in the way the food industry uses water.