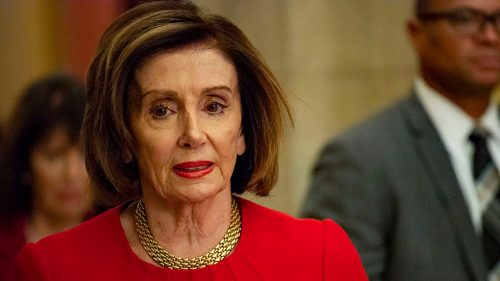 With the ink barely dry on a massive, $2 trillion coronavirus relief package, House Democrats are already laying out their targets for the next round of emergency aid, including major investments in the nation’s infrastructure systems.

Speaker Nancy Pelosi (D-Calif.), joined by several key committee chairmen, said Monday that the Democrats’ fourth phase of coronavirus stimulus would be largely focused on helping the front-line medical workers, homebound parents and patients afflicted by the deadly virus — people who may have fallen through the cracks, she said, in Congress’s earlier responses to the fast-spreading pandemic.

As an additional component, Democrats are also eyeing new funding for water, broadband, schools and other infrastructure systems that have proven insufficient, they said, in the face of the current coronavirus crisis.”There are infrastructure needs that our country has that directly relate to how we are proceeding with the coronavirus,” Pelosi said on a conference call with reporters. “And we would like to see in what comes next something that has always been nonpartisan, bipartisan, and that is an infrastructure piece that takes us into the future.”

Such a funding boost would not only promote public health by updating systems like public drinking water and telemedicine, they argued, it would also create jobs and provide a shot in the arm for an economy devastated by the virus.

Rep. Frank Pallone Jr. (D-N.J.), chairman of the House Energy and Commerce Committee, said the crisis has “bared a lot of inadequacies” in the nation’s infrastructure, not only when it comes to hospital capacity but also rural broadband, as schools have closed and classes moved online.

“If you don’t have access to the internet you can’t do telemedicine and you can’t learn when you’re not going to school in person,” he said. “So I think you can link all these to the coronavirus and say, look, these are all the problems that we’ve had in the last few weeks or in the next few months, and we’ve got to address the infrastructure so this doesn’t happen again if there’s another pandemic or disaster of a similar nature.”

It remains to be seen if Republicans, who control both the Senate and the White House, will embrace the Democrats’ push for a broad infrastructure expansion as part of the next round of coronavirus stimulus.

GOP leaders had howled when Pelosi and House Democrats unveiled legislation earlier in the month providing $2.5 trillion in coronavirus relief, saying it contained too many provisions they deemed extraneous to the immediate crisis. And House Minority Leader Kevin McCarthy (R-Calif.) has recently questioned if Congress, after passing three phases of emergency relief, needs to act again at all.

“I’m not sure we need a fourth package,” McCarthy told Fox News on Sunday.

Pelosi, however, noted that President Trump had won the White House campaigning on a massive infrastructure program, saying the coronavirus has provided Washington policymakers with an “opportunity” to unite and get it done.

“It’s a wonderful opportunity because I think our country is united in wanting to, not only address the immediate needs of the emergency and the mitigation for the assault on our lives and livelihoods, but also how we recover in a very positive way,” she said.

“Infrastructure has never been a partisan issue. Ever.”

The comments came just three days after the House passed a sweeping relief package providing hundreds of billions of dollars for the major industries, small businesses and newly unemployed workers who have suffered the brunt of the economic fallout from the coronavirus epidemic. The mammoth rescue package also includes cash payments, up to $1,200 for individuals, designed to goose consumer spending as as brick-and-mortar shops are forced to shut down and workers are laid off en masse.

Trump signed the bill into law on Friday.

Pelosi, who played an outsize role in crafting the package, has praised the proposal as a families-first initiative. But many House Democrats have grumbled that the $2 trillion measure — negotiated largely by Senate leaders and White House officials while the House was on recess — tilted too favorably toward corporations while neglecting workers and low- and middle-income families most directly affected by the novel coronavirus.

Pelosi and her caucus are now fighting to address those concerns as Congress eyes the next, fourth phase of economic relief. In it, they’re vowing to expand paid leave for workers and parents forced to stay at home; increase certain pension payments; boost the availability of protective medical equipment, like goggles, masks and gowns; and strengthen worker protections under the the Occupational Safety and Health Administration.

“We have taken unprecedented steps to slow the spread of this virus,” said Rep. Bobby Scott (D-Va.), chairman of the House Education and Labor Committee. “But this effort will not be successful if we lose health care capacity because our nurses, doctors and other medical staff are getting sick.”

In addition, House Democrats want to use phase four to boost funding to strapped states, provide another round of cash payments to individual Americans and ensure that patients receive coronavirus treatments — not just testing — free of charge. They’re also eyeing language to remedy a perceived inequity in the last relief bill, which treated Washington, D.C., like a territory, when it came to the distribution of funding, rather than one of the 50 states.

“In the course of that they lost several hundred million dollars in funding,” Pelosi lamented. “We did a good job for our territories, but the District of Columbia is not one of them.”

It’s unclear when Congress would act on a new coronavirus stimulus bill. Senate Republican leaders recessed the upper chamber last week until at least the week of April 20, and House Democrats announced Monday that they’ve adopted that same timeline.

But as the number of coronavirus cases skyrockets around the country — and as more lawmakers have tested positive in recent days — party leaders are leaving open the possibility that the break could run even longer.

“We don’t know how many weeks we’ll be out,” Pelosi said.