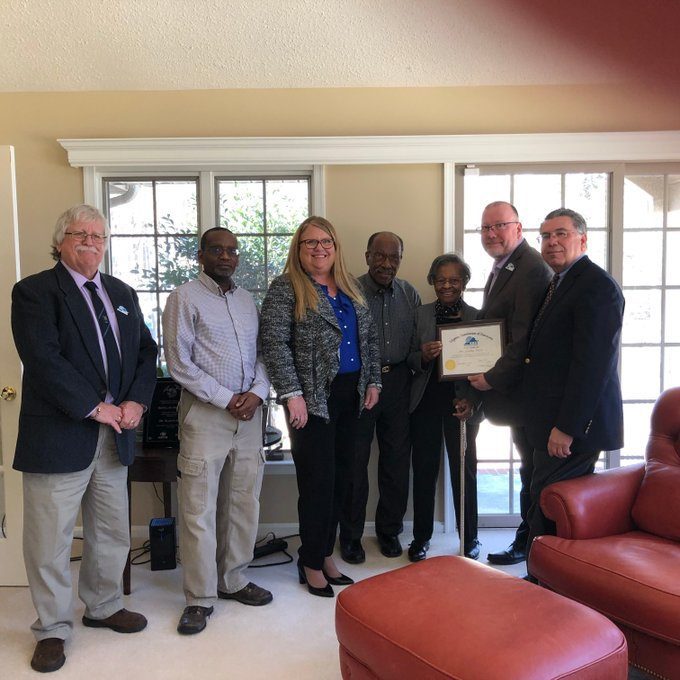 The Virginia Association of Surveyors (VAS), the professional society of more than 400 licensed surveyors in the Commonwealth, today announced it has bestowed an Honorary Membership upon Dr. Gladys West of King George in recognition of her work on the mathematical modeling of the shape of the Earth and the development of the satellite geodesy models that were eventually incorporated into the Global Positioning System (GPS). Representing VAS was President Gary Faulhaber, Second Vice President Alison Hanson, Dave Doyle (Honorary Member of VAS and former Chief Geodetic Surveyor of the National Geodetic Survey), and Executive Director John Palatiello.

The group met Dr. West and her family at her home in King George. The Honorary Member recognition had been unanimously approved by the VAS Board of Directors.

Upon presenting a certificate of Honorary Member in VAS to Dr. West, Faulhaber said, it is “in overwhelming gratitude for your contributions and groundbreaking work in mathematics, revolutionizing positioning, navigation & timing or ‘PNT’, satellite geodesy, the mathematical modeling of the shape of the earth to define the “ellipsoid”, the computation of gravity coefficients from geoid heights, GPS, which now has become an everyday tool for most every layperson and is actually responsible for bringing each of us here to your door.” He noted, “you have already received numerous awards which include two prestigious awards presented in just the past year, the United States Air Force Space and Missiles Pioneers Hall of Fame and a National Society of Professional Surveyors (NSPS) award of lasting appreciation for your contributions in satellite geodesy.” He concluded, “on behalf of our Board of Directors and all of the members of the Virginia Association of Surveyors, the great land surveyors of your home Commonwealth, it is my great honor and privilege to present to you, Dr. Gladys West, this certificate of Honorary Membership in our Virginia Association of Surveyors.”

Dr. West told the VAS delegation stories of her career, including the fact that her work for the Department of Defense was highly classified, meaning she could never tell her children what she was doing. Her daughter, Carolyn Oglesby, said she and her brother, Thomas, never knew of their mother’s remarkable achievements until recently, when their hometown newspaper, the Fredericksburg Free Lance Star, published a feature story. The surveying community learned of her accomplishments through a subsequent story in xyHt, a surveying trade magazine.

The VAS delegation was hosted by Dr. West, her husband of more than 60 years, Ira, and her children Carolyn, herself a PhD, and son, Thomas, a GIS program manager for Spotsylvania County, VA. Dr. and Mr. West have also created a local STEM scholarship.

“It was truly an honor and a privilege to present Dr. West with her Honorary Membership. Today, by far, was one of the greatest moments of my Presidency. I was totally in awe of her humility and kindness. It was awesome to hear that her grandson has expressed an interest in a career of land surveying. I introduced and extended the invitation to her son to apply for a scholarship from our Education Trust. How cool would it be for Dr. Gladys West’s grandson to become a future Land Surveyor and member of our VAS,” Faulhaber said.

“It was truly an honor to represent the VAS and to have an opportunity to meet Dr. West and her family. I am very grateful for the experience and to be able to listen to her personally share, in a humble fashion, the account of her career and achievements. I am also appreciative that I had the opportunity to thank her for her role as a pioneer in our history and for the impact she has had on our profession and in the advancement for women and minorities in STEM. The work of Dr. West transformed the way we all work and live today and not surprisingly she and her family continue their efforts in support of STEM. She is a true inspiration to us all and I am very glad the story of the work she did, and the stories of others are no longer ‘hidden'”, according to Hanson.

“Meeting Dr. West has to be one of the most memorable events in my career. Her pioneering activities and significant achievements in geodesy, accomplished in the face of so many challenges combined with her humility, love of family and country should be an inspiration to all of us. I was extremely honored to have been a part of this presentation by VAS”, said Doyle.

The Virginia Association of Surveyors (VAS) was established in 1948 to promote the best practices of its members, provide a forum for discussion, and offer professional development courses to licensed, practicing surveyors in the Commonwealth.