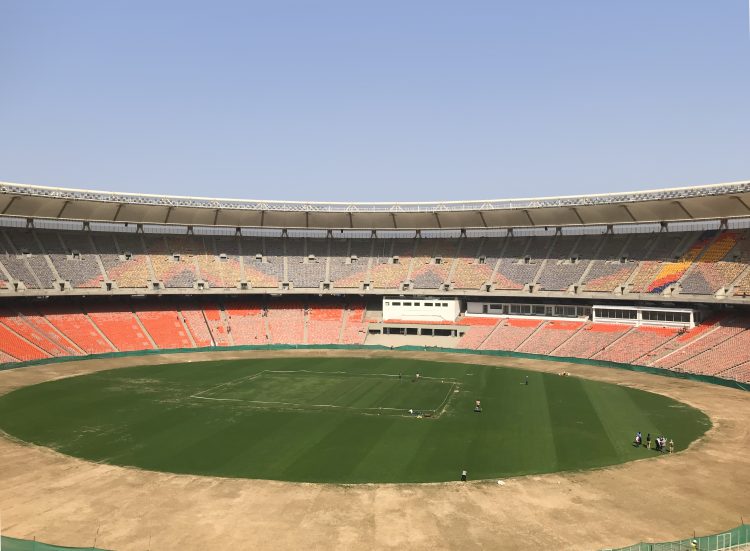 AHMEDABAD, INDIA, Feb. 24, 2020 – Motera Stadium is poised to become the world’s largest cricket stadium following its inauguration in February 2020. The stadium will accommodate over 110,000 (1.1 Lakh) cricket fans, surpassing its preceding record holder, Melbourne Cricket Ground. After two years of demolition, the new facility is completing construction on the same 63-acre site as its predecessor, Sardar Patel Stadium—which will be its official name after opening.

Motera Stadium responds to the vision of Shri. Narendra Modi, the Honorable Prime Minister of India, doubling the capacity of the previous venue. Despite its size, the stadium was constructed in three years. The new home of the Gujarat Cricket Association includes 76 corporate boxes, four team dressing rooms and facilities, state-of-the-art club facilities with three practice grounds, an indoor cricket academy, and a 55-room clubhouse which will have an Olympic-size swimming pool.

“Being born in India, I am a huge fan of Indian cricket. For our firm to have been a part of the design team bringing innovation to an iconic venue such as Motera is a deep honor and privilege. May every fan that visits the venue experience the passion that we have had when designing this outstanding project,” adds President & CEO Dilip Choudhuri.

Walter P Moore served as the structural engineer for Motera’s roof system. Taking into consideration the fact that the city of Ahmedabad is located in a level 3 seismic zone, the roof needed to be lightweight to reduce seismic demand and develop an economical roof system. Walter P Moore proposed a tensile fabric roof system that is seismically separate from the concrete seating bowl and supported by steel “V” shaped columns. These columns resist gravity and lateral loads resulting from high winds and earthquakes.

“I have had the opportunity to be a part of the design team of many stadiums in the U.S., however, getting a chance to design the roof of the biggest cricket stadium in the world is like a dream come true. In addition to Amol Acharya, who led our design team in India, Abhishek Bhargava, and our entire team in India, I am excited to welcome fans in this great facility that L&T built,” adds Project Manager Abhijit Shah.

PTFE (polytetrafluoroethylene), Teflon-coated woven fiberglass, was stretched between a circumferential inner tension ring and an outer compression ring. A wind tunnel test was also performed to optimize roof design. Walter P Moore used Load Response Correlation Method to develop critical wind load patterns from the wind tunnel test. The stadium exists in tiers to accommodate smaller events and maintain the atmosphere for spectators even when the bowl isn’t full. These tiers carry through to the roof, making the fact that it is structurally independent a crucial design element. The stadium is already scheduled to host audiences as they support cultural leaders and bear witness to festivals and celebrations, in addition to local and international cricket matches.

“Through Walter P Moore, I have worked on a number of sports projects. I grew up in the City of Ahmedabad before moving to the United States over 35 years ago. Designing the roof for the world-class Motera Cricket Stadium was very special for me,” says Viral Patel, Principal-in-Charge.

An iconic sports venue, Motera serves as a beacon for both aspiring and elite players. Gujarat Cricket Association is prepared to claim their stake on the global sporting map as they open the doors to what will become known as the world’s greatest cricket stadium.