MTA’s renovation program is the first design-build contract in the subway system’s history. The logistics of the project were creative as well, as MTA was, for the first time, closing one station at a time for a period of six months to up to 12 months. This was in lieu of prior approaches to construction work, which meant night and weekend closures for a period that stretched out several years. Closing the stations in this manner, coupled with the design-build procurement method, now is being used to deliver projects in a much more expedient fashion.

The aim of both projects was to improve the street presence of the stations’ entrances; modernize the information systems throughout the stations; update the look of the interior; and upgrade the lighting as well as mechanical, electrical and plumbing (MEP) infrastructure to give the stations a clean look. The team also renovated items that had deteriorated structurally, repairing various structural steel and concrete elements. They also performed waterproofing and made extensive safety improvements.

Grimshaw Architects served as the program designer for the overall, system-wide program, with Arup as the program manager. Grimshaw focused on identifying ways to improve each station’s appearance, usage, wayfinding and flow of foot traffic. The resulting guidelines established a new look and feel for MTA subway stations going forward.

In addition to structural upgrades, turnstile areas were upgraded, and all stations were equipped with supplementary security cameras, enhanced LED lighting and an increased number of Help Points, which allow customers to communicate quickly with staff for assistance. The LED light fixtures are energy efficient and don’t need to be replaced as often. Signage and lighting were upgraded as well. In all six stations, the team reconfigured the fare-control areas using glass barriers, removing unsightly metal bars. As a result, sightlines have been exponentially improved.

The first three-station package in Brooklyn, with a budget of $72 million, consisted of the 102-year-old 53rd Street Station, along with two other century-old Brooklyn R subway stations on the BMT Fourth Avenue Line: Prospect Avenue Station and Bay Ridge Avenue Station. Urbahn served as the architect and HAKS as the engineer for the 53rd Street and Bay Ridge Avenue stations, while HAKS was both architect and engineer for the Prospect Avenue station.

“The stations’ design is now modern, visually attractive, and easy to use and navigate,” says Urbahn Principal Natale V. Barranco, AIA, LEED AP. “Where once the station was difficult to find even by riders who lived in the neighborhood, now the station’s entrances are prominent and architecturally appealing. This is especially important because Fourth Avenue is a major Brooklyn thoroughfare.” 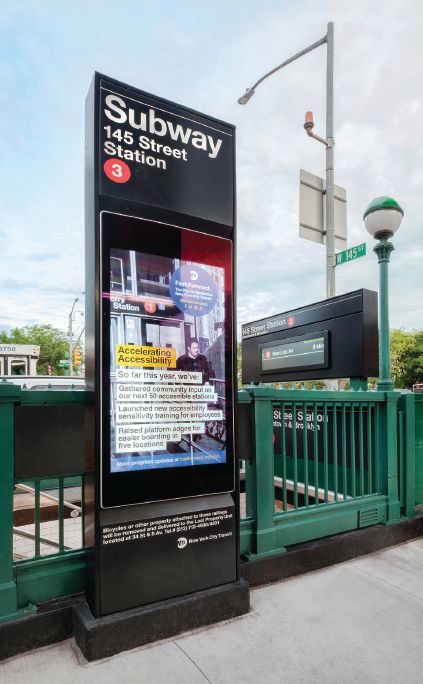 Custom-designed information display fixtures, or “totems,” were installed at the street level to provide real-time service information before riders enter the station. The totems are custom-fabricated by Boyce Technologies, using a design developed by Grimshaw, Arup and Billings Jackson Design. Each totem features a digital screen with changing subway and neighborhood information, and a green acrylic dome at the top indicating the entrance’s 24/7 operation.

The renovated 53rd Street subway station—which is situated on the corner of 53rd Street and Fourth Avenue, in the Sunset Park section of Brooklyn—illustrates the extent of upgrades to all three stations. It features five street entrances located on 53rd Street, Fourth Avenue and Bay Ridge Avenue: three entrances on the southbound side, and two on the northbound side. Internally, the station is on two levels. The mezzanine level is about 3,000 square feet, while the platform level below it (about 20 feet below grade) consists of approximately 16,000 square feet.

Urbahn found that the 53rd Street station was of two eras: several original elements of the circa-1915 station were still extant, such as some of the tile work. Other elements were holdovers from work done in the late 1970s, when the platforms were extended to current dimensions and selective upgrades were performed, including work on the staircases. Cinderblock tiles (gray with yellow indentation) replaced some of the original wall tile; signage was modernized with black-and-white lettering; and unattractive, utilitarian linear fluorescent fixtures replaced the original incandescent lights.

“We saw we had a great deal of work cut out for us to modernize the station, both inside and out, to make it more user-friendly and provide a much better rider experience,” explains Ranabir Sengupta, AIA, LEED AP, Urbahn’s associate principal.

As with many stations in the system, the 53rd Street station featured street entrances surrounded by painted utilitarian cast-iron rail fences, each with a colored globe light that, at one time in the station’s history, indicated whether or not the entrance was open throughout the night. Grimshaw came up with the concept of using canopies to “announce” the entrances to multiple stations in the MTA renovation program. The canopies also would provide better, more-visible service announcements, supplanting the need for colored globes. 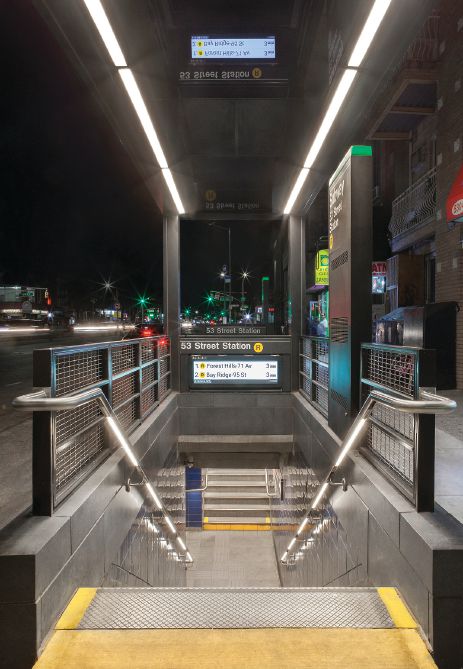 Urbahn worked with its team members to develop the final design of the canopies. They developed a structural system comprising new tubular-steel framing embedded in the sidewalk and connected through base plates to the concrete foundation that has integrated rebar and the existing concrete frame around the entrance stair. The structural design of the canopy was calculated for wind and snow loads.

The station’s mezzanine features an agent booth, fare-control devices and fencing as well as support facilities that include personnel bathrooms. The existing agent booth received a new, modern look, with finishes that include dark glass cladding and stainless steel trim. In the fare-control area, metal bars were removed and replaced by glass barriers. These allow light to distribute evenly throughout this level and enhance sightlines. The mezzanine’s ceilings are the original concrete; they were simply cleaned using a sandblasting process. In some areas, the renovation team exposed steel beams in the ceiling and painted them gray.

Custom information screens were placed so passengers can view train arrival times and status update alerts before paying and entering the turnstiles. Two digital dashboards were installed near the booth. A traditional, oversized subway map also was incorporated in the refurbished space. However, it’s now displayed in a newly designed illuminated case with black metal trim.

Two stairways from the mezzanine level lead down to each of two platforms. The team rebuilt them all and equipped them with steel handrails, gray granite-clad risers and new treads. Although the handrails here are not illuminated, like those installed at the street entrances, there is plenty of light given off by the overhead LED fixtures installed at the top of stairs. These are similar in design to the fixtures used in the mezzanine.

This combined $88 million modernization involved structural, infrastructure, safety and passenger-comfort enhancements to the Number 3 train/IRT Lenox Avenue Line’s 145th Street station in Manhattan, and the Bronx’s B and D trains/IND–Concourse Line’s 167th Street station and the B and D trains/IND–Concourse Line’s 174th-175th Street station. Urbahn served as the lead architect for the first two stations, while engineering firm HAKS was the lead architect for the third station. Citnalta-Forte was the contractor for all three stations. 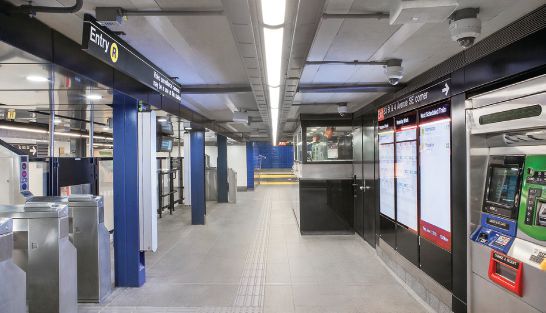 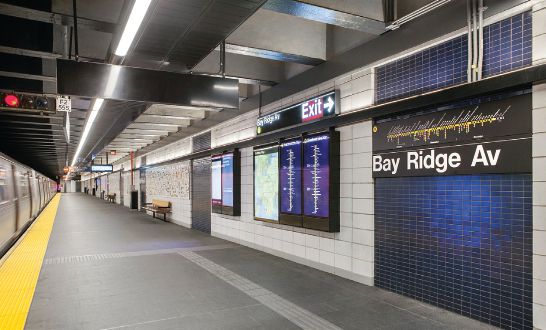 In addition to the improvements found at the Brooklyn station upgrades, the team installed artists’ glass-and-ceramic mosaics within the platform walls of each station. Like the Brooklyn project, they performed a great deal of work in an extremely condensed period of time. The Manhattan station was completed in only about four months, while the Bronx stations took about 18 weeks each.

“To get the work done quickly, we issued design submissions on an accelerated schedule, made heavy use of work trains to move materials in and out of the stations, and had the workers on extraordinary schedules,” notes Barranco. “All of this, coupled with the design-build procurement method, allowed MTA to reopen the stations in only a couple of months, despite each station having been in continuous use for about 100 years prior.”

The Manhattan station had been in continuous use since it opened in 1904, while the two Bronx stations had been in operation since they opened in 1933. Little more than routine maintenance had been performed over the years, so critical repairs were necessary due to water infiltration, aging concrete ceilings and walls, and deteriorating structural steel, as well as daily wear-and-tear.

This Harlem station, at the intersection of 145th Street and Lenox Avenue, is on the National Register of Historic Places. Therefore, the team had the additional challenge of working with MTA’s historic preservation group and New York’s State Historic Preservation Office to get approval for the work.

“We used an older glass tile to match what was used in the station’s original construction,” notes Larry Gutterman, AIA, LEED AP, Urbahn’s design manager on the project. “Getting that sourced, replicated and delivered on time was a logistical challenge. We had similar issues to overcome with the selective mosaic repair we had to do, as well as the restoration of the terracotta cartouches that marked the station number.” Urbahn worked with Jablonski Building Conservation Inc., the conservator and historic preservation expert on the project.

Reconstructing the street stairs at this location was more involved than at the other locations, due to the fact that the stairs at this station had been equipped with flood-mitigation devices. The team had to perform a selective removal of the sidewalk and, during the installation, carefully integrate waterproofing around the entrances. 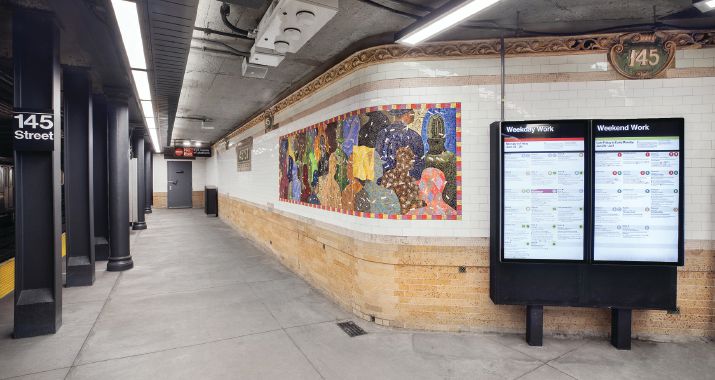 This station is located in the Highbridge and Concourse sections of the Bronx, at 167th Street and Grand Concourse. The station’s two side platforms were overhauled and upgraded. One of the challenges involved coordinating all of the signage and the lighting, but the team managed to create a much-enhanced station that includes fixes to the electrical and communications systems.

Another challenge involved integrating new artwork into the space. The artist, Brooklyn-based Rico Gatson, created “Beacons,” a series of mosaics that depict prominent figures from history and culture who have been influential in the Bronx and beyond. The southbound platform features mosaics of Gil Scott-Heron, Audre Lorde, Celia Cruz and James Baldwin. The northbound platform has been graced by Justice Sonia Sotomayor, Reggie Jackson, Tito Puente and Maya Angelou.

This station also is located at the Grand Concourse and has three tracks and two side platforms. However, here the Grand Concourse is raised above the surrounding street grid, while the Cross-Bronx Expressway crosses in tunnels beneath the station, creating an unusual elevation in relation to the surrounding neighborhood and, as a result, a rather unorthodox station layout. At the south end of the station, riders must exit out to the street from underneath the station, via a lower mezzanine below the platforms.

“We introduced a canopy here to create a more welcoming entrance at the lower level,” notes Urbahn’s project architect, Ijeoma D. Iheanacho. She explains that this canopy is used to “announce” the station entrance as well as provide much-improved, more-visible service information. Urbahn worked with Grimshaw to develop the final design of the canopy, which is made with two structural-steel columns that support a roof frame with a cantilevered glass panel over the entrance and clad in black-metal panels for drama.

Another challenge with this station was assessing and then selectively replacing the platform walls. They had been subjected to a great deal of structural deterioration and water infiltration, so repairs were extensive. After this was remedied, the team found they had a great deal more replacement tile work than anticipated. Similarly, the team had some selective replacement of the floors on the mezzanines, which meant they needed to tint the new concrete to match the existing color.