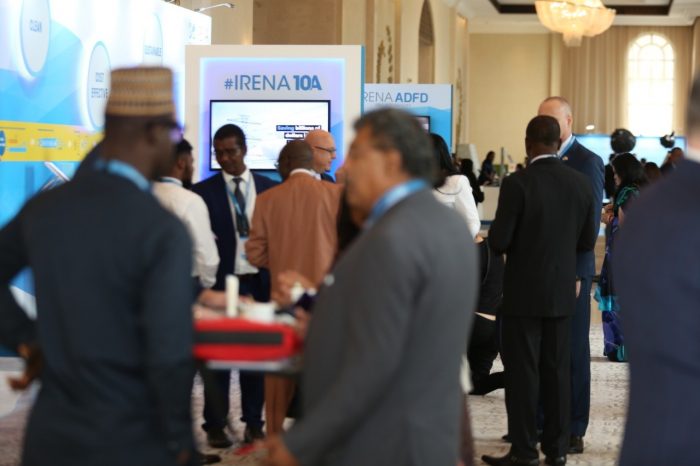 Abu Dhabi, United Arab Emirates — More than 1,500 delegates and high-level participants including prime ministers, ministers, heads of international and regional organisations together with leaders from financial institutions and private sector entities will gather in Abu Dhabi tomorrow for the Tenth Session of the International Renewable Energy Agency (IRENA) Assembly. The decision makers will come together to accelerate the uptake of renewable energy and advance the global energy transformation.

“As the lead intergovernmental agency for the energy transformation, IRENA and its Assembly, will endeavor to set in motion a decade of rapid energy sector development to ensure that renewables support a new age of universal energy access, sustainable economic growth and climate action,” said IRENA Director General Francesco La Camera. “There is no question we are moving in the right direction but a significant increase in the speed of transformation is critical to global development.

The 10th Assembly takes place at an important time in the pursuit of global goals aimed at addressing key social needs and climate change whilst building sustainable economic outcomes. With renewable energy recognised as a central contributor to the achievement of several development objectives delegates will discuss issues related to renewable energy policy, investment and technology. The Assembly will be presided over by Uganda’s Deputy Prime Minister, H.E. Ally Kirunda  Kivejinja.

Youth will feature on the agenda for the first time at an IRENA Assembly. The Agency will invite young people from around the world to the first IRENA Youth Forum, offering young people an opportunity to make concrete contributions to the global energy discourse and stay informed on developments in the renewable energy sector.

Across the two main days of the Assembly on January 11-12, three ministerial discussions will cover issues that are central to the acceleration of sustainable sources of energy. The ministerials will cover financing the climate response together with climate and energy policy making, the potential of green hydrogen to decarbonise hard-to-reach sectors such as transportation and industry, and hydropower. Additionally, the countries selected as recipients of project funding under the 7th cycle of the IRENA/ADFD Project Facility will be announced, and three loan agreements will be signed.

The Assembly takes place at the beginning of Abu Dhabi Sustainability Week (ADSW) and precedes the World Future Energy Summit (WFES), a global gathering of energy leaders and decision makers. Throughout the week, IRENA will host and participate in a series of events and discussions across a range of topics.

More about IRENA’s participation during the World Future Energy Summit can be found here.

More on the IRENA Tenth Assembly