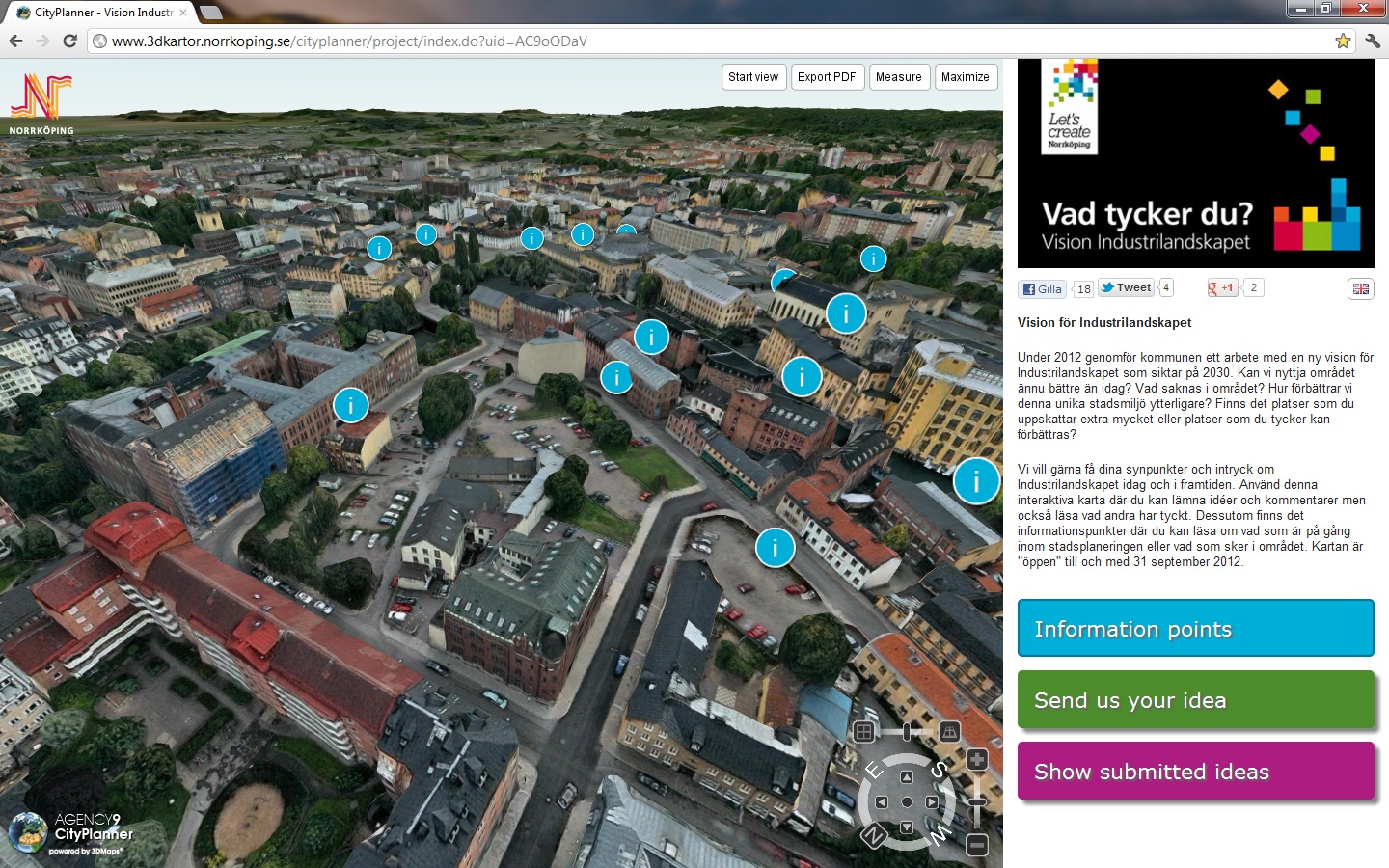 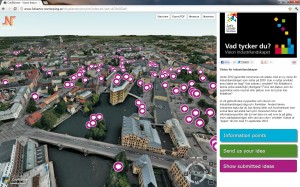 In a new innovative service on the web the City of Norrköping in Sweden empowers its citizens to plan the future city centre. The project was initiated by the city planning office of Norrköping to communicate plans for the new city centre as well as engage the citizens to contribute with ideas.

In the service, based on Agency9 CityPlanner, the user easily navigates in an interactive 3D view of Norrköping and explores the city. Information points provide details in text, images and 3D models.  The user can comment and read others’ comments directly in the 3D environment.  Unlike traditional physical models in closed exhibition halls the web services is available to the citizen all 24 hours of a day. This is a new channel to attract people of the younger generations and people too busy to visit exhibition meetings and hearing meetings. This is a new way of clearly communicating projects and to build positive support for proposed plans. The service was released by Norrköping Municipality in connection with a local real estate event on April 13-15.

“We are overwhelmed by the positive response from citizens and media. Already after a few days there were many qualified comments from citizens proving its value. The attractive near reality presentation of the city in 3D combined with the simplicity in accessing information brings clarity and makes it easy to create interest from citizens. We will continuously monitor the inputs as contribution in our development of the city.” says Dag Johansson City Architect of Norrköping

See “Vision Industrilandskap” live:  http://www.3dkartor.norrkoping.se/cityplanner/project/index.do?uid=AC9oODaV
The service in Norrköping is based on Agency9s CityPlanner, a web based service for collaboration and communication in urban development and infrastructure projects. Agency CityPlanner is provided as a cloud service and allow projects to:

“Norrköping is adding a new dimension to public communication in urban development. Agency9 CityPlanner is a platform for collaboration and dialogue as well as establishing positive support for projects. It also helps in discovering complaints and problems at early stage, saving valuable time and efforts for the city. Norrköpings implementation is a good example of how today’s technology can be used to substantially improve public participation in the city planning.  The intuitive user interface and features of this service been created with input from the city planning office of Norrköping is using the Agency9 CityPlanner being generally available this month.” says Khashayar Farmanbar CEO of Agency9.

About Agency9
Agency9 is the leading supplier of software of web-based 3D visualization of geographic information and maps for collaboration and communication in the infrastructure-, construction- and public sector. Agency9’s product portfolio includes 3DMaps, CityPlanner and other web based 3D geospatial solutions.  The company was established 2003 and have several international cities as customers such as Gothenburg, Salzburg, Oslo and Berlin.  www.agency9.com

Comments are disabled
NEXT ARTICLE
Real-Time Simultaneous Precise 4D Surveying Above and Below Water
May 17, 2012
PREVIOUS ARTICLE
MAVinci SIRIUS Certified in Spain at UVEX 12
May 17, 2012