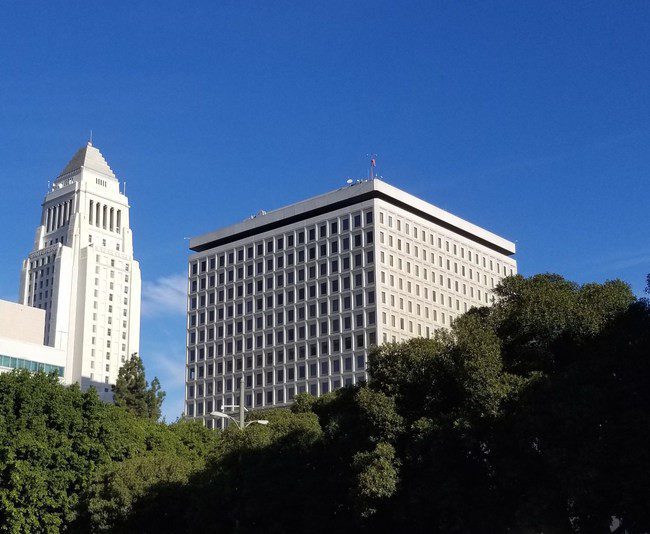 After 18 months of operation at LA City Hall East, a treatment system installed by Dynamic Water Technologies showed more than a 90 percent savings in chemical costs, and a water-use reduction from 5.95 million gallons a year to 4.78 million, a savings of 1.17 million gallons – or 20 percent less water.

SCOTTSDALE, Ariz., Jan. 6, 2020 – A pilot program to evaluate better methods to save water in drought-stricken California demonstrates that governments and businesses can save millions of gallons of water annually by changing how they treat the water used to cool their buildings or used in industrial processes. 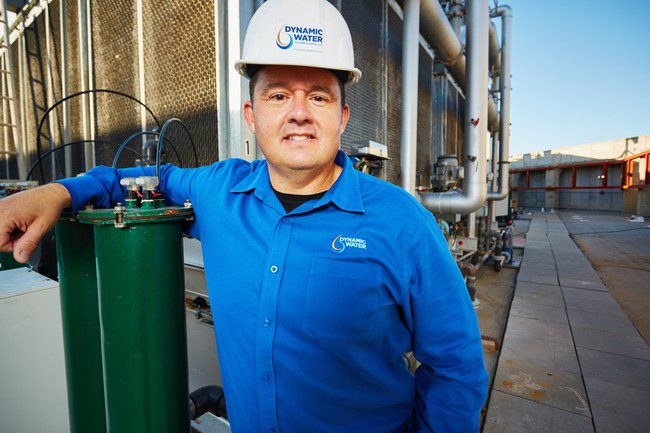 After 18 months of operation at LA City Hall East, a treatment system installed by Scottsdale, Ariz.-based Dynamic Water Technologies showed more than a 90 percent savings in chemical costs, and a water-use reduction from 5.95 million gallons a year to 4.78 million, a savings of 1.17 million gallons – or 20 percent less water.

“The study results at LA City Hall East gave us some of the best recorded data to date on how much water can be saved by installing a nearly-chemical free treatment process that uses electrolysis to remove bio-contaminants, mineral build-up and other impurities from industrial water,” said Mike Boyko, CEO and founding partner at Dynamic Water Technologies. “Simply put, by balancing the water, the client sees dramatic savings in water, sewer and chemical use, translating to monies saved.”

After an extensive evaluation process, DWT was selected by the Department of Energy’s High Impact Technology Catalyst Program, which evaluates emerging technologies that save energy and natural resources, to participate in the pilot program. The Energy Department’s National Renewable Energy Laboratory served as an independent monitor. The NREL tracked the system’s performance from April 2018 to October 2018. NREL released the final numbers of the study in September 2019.

“In addition to the reduced chemical costs and water savings, the DWT system also removed historical scale from the condenser tubes and cooling tower media. Removal of scale from the condenser tubes improves heat transfer and should improve the operating efficiency of the cooling system,” said Mark Roussel, Assistant Director of the Building Maintenance Division at the City of Los Angeles.

In comparison to other traditional and non-traditional methods used by the city, city leaders found the results were so conclusive that the Los Angeles City Department of Water and Power contracted with Dynamic Water Technologies to install the reactors at the city’s downtown headquarters as part of the city’s proactive efforts to save water.

Cooling tall buildings uses an enormous amount of water that is circulated throughout the cooling system. The water is used for several cycles, but has to be replenished or completely removed when hazardous contaminants and scale accumulate. Adding water to replace water lost to evaporation and the cooling process is called “make-up” water. The dirty, contaminated water that is removed is called “blowdown” water.

In the LA City Hall study, NREL reported a 19 percent reduction in make-up water and a nearly 66 percent decrease in blowdown. Before the DWT installation, water was recycled between 3-5 times. After the installation, water cycles exceeded 10 cycles.

“By re-using the water for the additional cycles, we are able to save millions of gallons of water,” said DWT co-founder, Neil Ginsberg. “Make-up and blowdown are two areas where any large building — whether it’s a government building, hospital, shopping center, office complex, power plant, refinery, industrial processes – they all expend millions to tens of millions of gallons of water. Reducing those gallons also saved on sewer and treatment costs.”

In addition, the DWT system reduces mineral build-up in tubing, pipes and throughout the cooling system, extending the life of the equipment, and again reducing costs, he said.

Another government study showed similar results at a federal building in Savannah, Ga. In late 2018, the General Services Administration released a report based on a multi-month study at the 242,000 square-foot Juliette Gordon Low Federal Building. The building has two cooling towers that used traditional chemical water treatment for the cooling water circulating through the two chiller condensers.

That study took place from July to October in 2017. Researchers found that the system effectively treated the water without the expense of added chemicals and reduced water use by 32 percent, resulting in a recommendation of the GSA for a governmentwide adoption of the DWT’s electrochemical process water treatment technology.

Dynamic Water Technologies is a Scottsdale, Ariz.-based company that provides electrochemical treatment of process water allowing governments and businesses to use the water generally two to six more cycles than traditional chemical-based approaches. Dynamic Water uses electrolysis to treat the water and release it back into cooling towers onsite without using acids or inhibitors and occasionally a minimal amount of bleach if required. The system generates a very effective biocide in its reactor system through a continuous halogenation process. End users report significant savings in operational costs as a result of not using acids and inhibitors, not paying for disposal of contaminated water, using less energy than other treatment methods, and reducing water usage between 10-40 percent in cooling systems. Clients worldwide include NASA, Roche Molecular Systems, Los Angeles City Hall, Banner Health, Transwestern commercial real estate company and Gilead Sciences, Inc. Contact Dynamic Water Technologies at info@dynamicwater.com, or call (480) 289-2401.