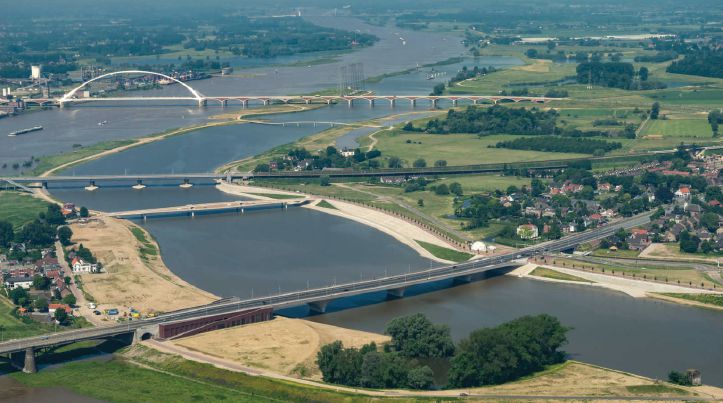 What the United States Can Learn From the Dutch

In many countries worldwide, infrastructure is a critical topic, and the United States is no exception. The American Society of Civil Engineers (ASCE) scrutinizes U.S. infrastructure every two years, and we’ve consistently been given an almost-failing grade. Most recently, the 2017 report card gave the overall condition of the nation’s infrastructure a “D+.” Based on data reported by the ASCE, more than 200,000 bridges in the United State are more than 50 years old; of those bridges, more than 50,000 have been rated as structurally deficient. These aging aspects of the American landscape are compounded by the looming presence of climate change.

As extreme weather becomes a more-frequent occurrence, bridges aren’t the only subject of concern. The levees in our cities are increasingly at risk of suffering catastrophic failures, as was the case with Hurricane Katrina and Hurricane Harvey. The flood damage from Katrina alone displaced more than 700,000 residents, extensively damaged oil and gas pipelines, and cost the city of New Orleans billions of dollars to repair over several years. This highlights an important fact; the consequences of failed infrastructure don’t just affect those who live in the immediate area. They create a devastating ripple effect that can be felt throughout the region and by the whole nation.

On this front, innovative technology has a valuable role to play. Modern methods for redevelopment projects—and in the AEC industry as a whole—rely heavily on technology. Three-dimensional design software can be used for the drafting and design stages, drones are employed to scan and map terrain, and so on. But the solution isn’t just to tear down the old and “build more,” the road forward must be laid with sustainability in mind. And there’s much to be learned by examining how other countries confront these same issues.

In the Netherlands, nearly half the land is below sea level. The city of Nijmegen (pronounced nie-may-ghen) sits on the eastern waterfront of the country, alongside a sharp bend that forms a bottleneck in one of their largest rivers: the Waal. In the 1990s, heavy rains and this bottleneck caused severe floods in the city. With greater risk of extreme weather and flooding brought on by climate change, the only way for Nijmegen to protect itself from future damage is by implementing flood-protection programs. 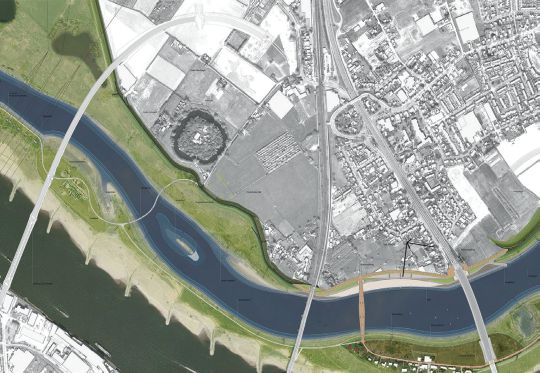 In 2011, one such program, “Ruimte voor de Waal,” (which translates to “room for the Waal”), began drafting plans to move existing dikes and levees, and dig a second 2.5-mile-long riverbed. The aim was to turn a portion of the suburb of Lent into an island, connected to both banks of the river by three bridges. Because the people living in this area would be displaced, the project faced initial backlash, but the value for future security against flooding won out. Plus, the newly created island wouldn’t be vacant; redevelopment included adding parks, recreational and leisure facilities, and new residential homes. The town planners had to consider extensive changes to the city infrastructure, with the primary goal of redirecting the course of the river via an additional channel.

The existing Waal bridge was extended by several hundred yards, built not as much with traffic in mind, but for the flow of water underneath. Two new bridges also were erected: the Citadel Bridge, connecting the mainland to the western part of the island, and the Promenade Bridge, which connects the mainland with the center of the island. The engineers involved faced an enormous challenge at this scale, especially since construction on all three bridges was expected to be completed and ready within a three-year period.

The successful delivery of this project relied heavily on building information modeling (BIM) software. The team of 10 designers and 10 engineers used Allplan software to create a 3D model of the formwork and reinforcement for the bridges. This allowed the work to be done more quickly and efficiently for the teams involved. All relevant information was derived and shared from the 3D model, such as views and sections, reports for steel and bending schedules, or volumes of ready-mixed concrete—automatically generated through quantity takeoff functions.

According to Marcel Linderman, a project manager with the engineering firm Witteveen + Bos, “We had to create hundreds of plans for every structure in the shortest possible time. We could achieve this because we can work effectively with Allplan from the start. Thanks to integrated planning, we were able to deliver on time and, what’s more, without any errors.”

Allplan software also would be beneficial on an infrastructure project of this scale in the United States. Thanks to parametric modeling and analysis, a large bridge project can be tested for different design iterations to find the best, most cost-effective choice. Staging can be accurately planned, and the data interoperability allows teams to easily exchange information without rework. Just the implementation of BIM software promotes a more-sustainable attitude toward infrastructure redevelopment, because software helps cut down the number of errors that often lead to excessive waste. When planning for our country’s future, the idea is to design and build projects that take current conditions and our expanding population into consideration. To build infrastructure that will last, the effects of climate change on our planet have to be factored in. 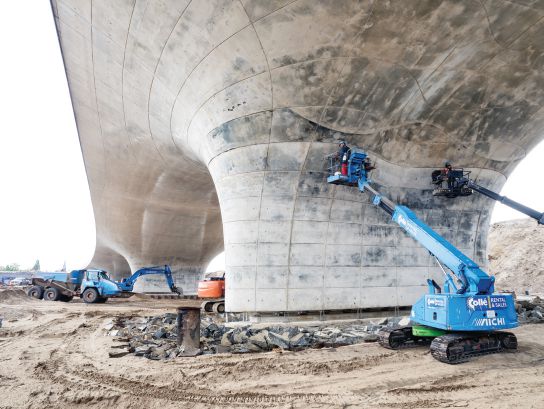 Although this attitude is slow to pick up speed throughout the United States, there are noteworthy projects that take a similar approach. The Salesforce Park, for instance, is a verdant stretch four-city-blocks long built atop an existing transit center in San Francisco. The project had its challenges, but in the end, it created an oasis for commuters and city residents, and added valuable green space into an otherwise concrete and steel landscape. There’s also the I-90 wildlife overpass that Washington state Department of Transportation built in 2018 to facilitate safe animal crossing in and out of the national parks that border the interstate.

Looking to the Dutch again, Jan Hendrik Dronkers, the General Director of the Netherlands Public Works and Water Management, wisely stated, “Fighting against water is no longer the way to keep the Netherlands secure and livable. In this country, we must learn to live with water by giving it a place in our daily lives. Safety is still paramount in our water management, but ‘building with nature’ is the credo nowadays.”

Indeed, it would appear that building with nature, not against it, is the most logical approach to achieving truly sustainable infrastructure.

Comments are disabled
NEXT ARTICLE
From the Editor: Is the ‘Scary Season’ Over or Just Beginning?
December 9, 2019
PREVIOUS ARTICLE
Global Spending in Construction to Reach $17.5 Trillion by 2030, Finds Frost & Sullivan
December 9, 2019