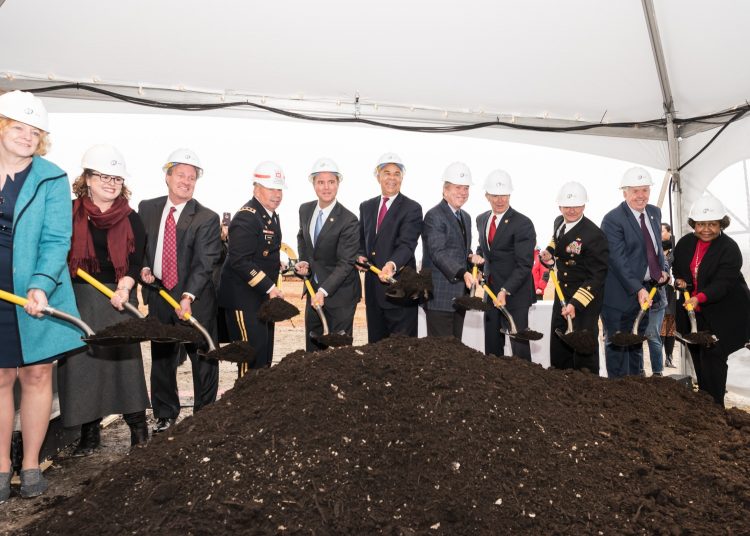 McKee was instrumental in bringing the new NGA headquarters to North St. Louis when MPS and Bob Clark of Clayco Realty Group responded in 2012 to a blind request for proposals, that later turned out to be NGA. McKee had assembled the majority of the land needed for the facility within his proposed NorthSide Regeneration Innovation District, then worked with city officials to assemble the remaining property to accommodate the agency’s site requirements. McKee and Clark credit Senator Roy Blunt (R, Missouri) and Congressman Lacy Clay (D, St. Louis) for advancing the NGA site selection and funding process over the past five years, as well as the State of Missouri which provided the economic incentives to deliver the site.

“With the incredible anchor of NGA’s $1.75 billion project now in the construction phase, the Innovation District within NorthSide Regeneration has begun,” said McKee. “Now we welcome the entire Geospatial/Geo-Intelligence industry leaders to come join NGA in this robust community.”

The NGA project, the largest North St. Louis has seen in generations, will employ more than 3,000 people and is expected to boost the economy of the underserved area, which is located less than a mile from Downtown St. Louis, The Gateway Arch and Busch Stadium.

The new 712,000-square-foot NGA facility will replace the agency’s current facility in South St. Louis, which dates back to the 1840s. NGA is the world leader in timely, relevant, accurate and actionable geospatial intelligence that enables the U.S. intelligence community and the Department of Defense to fulfill the President’s national security priorities to protect the nation.

The decision to build a new facility came after a series of planning studies showed it would be less costly, quicker and less disruptive to NGA’s mission to build a new facility rather than upgrade NGA’s current facilities. It has not yet been decided what will happen to NGA’s current campus, which is owned by the U.S. Air Force, when NGA vacates.

The new facility will include office space, parking garages, a visitor’s center, an inspection facility and control access points. The facility, which is designed to achieve a LEED Silver certification for environmental sustainability, is expected to be completed and fully operational by 2025. The U.S. Army Corps of Engineers is managing the construction on behalf of NGA.

“The new campus will be a secure, flexible, cutting-edge intelligence facility that will put NGA in the heart of St. Louis’ growing geospatial ecosystem and help NGA take advantage of its biggest strengths, its people and partners,” said NGA director Vice Admiral Robert Sharp. “NGA has been proud to call St. Louis home for the past 70 years. I’m excited to see what NGA’s people and partners in the St. Louis region can accomplish together for the next 70.”

An attendee at the groundbreaking Brian Krueger, head of the St. Louis Place Community Association where NGA will be located, said McKee deserves a lot of credit for assembling the land and bringing the new facility to his neighborhood, and he is grateful to see the progress. St. Louis Place is bounded by Palm Street on the north, Cass Avenue on the south, North Florissant on the east and North Jefferson on the west.

“My wife and I have been in St. Louis Place for about 17 years and we have always been hopeful that someone would take an interest in the neighborhood. We attended many of Paul’s neighborhood meetings and heard his vision. As head of the St. Louis Place Community Association, Paul has always made himself available to come in and work with us,” said Krueger. “NGA would not be here without the assemblage of land that Paul put together. Plus, it was Paul who found and responded to the initial RFP that started the process in the first place.”

M Property Services, LLC (MPS) is a full-service real estate development, property management and brokerage firm based in O’Fallon, MO. At the core of every MPS development is the concept of LifeWorks® – the creation of master-planned environments that are attuned to the needs and aspirations of the total person, providing opportunities for individuals to live, learn, work, play and pray. M Property Services has provided development assistance for over 3,600 acres and over 3.5 million square feet of commercial and residential space. Specializing in large-scale, mixed-use developments, MPS and its affiliates have owned or developed and sold office buildings, industrial facilities, retail centers and sites throughout the St. Louis metropolitan region and surrounding states. Developments include the 1,200-acre WingHaven® mixed-use community in O’Fallon, MO; NorthPark premier business park in North St. Louis County; and NorthSide Regeneration, an urban mixed-use community encompassing over 1,500 acres in North St. Louis City. For more information about M Property Services, visit www.mps-stl.com or call 636-561-9300