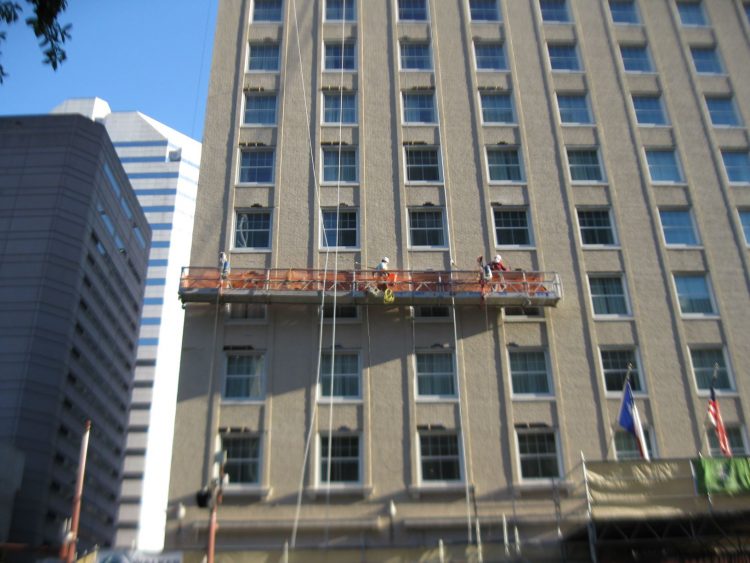 (St. Louis, MO) Western Specialty Contractors – Houston, Texas Branch was honored on Nov. 12 with an Award of Merit from the International Concrete Repair Institute for its work to restore the historic Lancaster Hotel in Downtown Houston.

The International Concrete Repair Institute (ICRI) conducts an awards program each year to honor and recognize outstanding projects in the concrete and masonry repair industries. Entries are received from around the United States, and the winning projects are honored each year at the annual ICRI Awards Banquet at their annual fall convention.

Built in 1926, the twelve-story, luxury boutique Lancaster Hotel was beginning to show signs of deterioration on its brick and stucco façade and its cast stone units, primarily at the top level of the building on the south and west elevations. The building also exhibited cracks at the spiral columns and mortar joints, as well as surface spalling of the cast stone trim and spandrel panels. Ornamental cast stone spiral columns and brackets were also missing, and the steel lintels and shelf angles were corroded.

A condition assessment was performed on the hotel’s facade that included a binocular survey from the ground and adjacent structures, close-up observation from suspended scaffolding and laboratory analysis of selected exterior wall materials. The deterioration was determined to be the result of lack of adequate cover of the cast stone reinforcement and water infiltration into the exterior wall, resulting in corrosion of the façade anchors.

“This was a great project done by a great team. This is a great example of how a negotiated-type contract with the owner, as opposed to traditional design-bid-build, is performed where the engineer, contractor and owner worked as a team to create a cost effective and superior delivery method,” said Alfredo Bustamante, PE, Vice President/Managing Director at Walker Consultants.

This restoration technique was effective in replacing the ornate historical building features without damaging the façade’s existing conditions, and it also helped reduce the design and construction costs on the project. The restoration project started in Sept. 2015 and was completed in March 2017. A total of eight Western Specialty Contractors workers were assigned to the project.

Western Specialty Contractors – Houston, Texas Branch Manager Patrick Sheeran said he is proud of the restoration team’s efforts and ability to overcome obstacles that arose on the challenging project.

“It was a design-build restoration project at a historical hotel and building in the heart of downtown.  We were only allowed to make noise during certain hours of the day and almost every scope of work created noise. Being a historical building, we had to follow strict historical guidelines set forth by the plans and specifications for the project,” said Sheeran.

Family-owned and operated for more than 100 years, Western Specialty Contractors is the nation’s largest specialty contractor in masonry and concrete restoration, waterproofing and specialty roofing. Western offers a nationwide network of expertise that building owners, engineers, architects, and property managers can count on to develop cost-effective, corrective measures that can add years of useful life to a variety of structures including industrial, commercial, healthcare, historic, educational and government buildings, parking structures, and sports stadiums. Western is headquartered in St. Louis, MO with 30 branch offices nationwide and employs more than 1,200 salaried and hourly professionals who offer the best, time-tested techniques and innovative technology. For more information about Western Specialty Contractors, visit www.westernspecialtycontractors.com