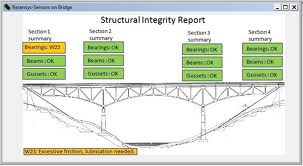 Nearly six years following the bridge disaster in Minneapolis, structures keep failing, including the I-5 bridge in Washington and buildings in both Philadelphia and Bangladesh. Each of these could have been prevented with Resensys LLC’s real-time, comprehensive, wireless, low-cost and low-maintenance structural health detection system.

“In most cases, before a bridge or building collapses, measurable, meaningful changes occur on the structure,” said Resensys President and CTO Mehdi Kalantari. “Our technology provides a strong tool for the early and efficient detection of these changes. Whether some portion of the structure is overstrained or deformed, irreversible shifts or transformations can be detected with our technology way ahead of an actual failure so that repairs, and/or adjustments, can be made.”

Comprised of small, networked sensors installed strategically on a bridge or building, Resensys’ system monitors a broad range of factors, including strain, acceleration, vibration, displacement, deformation, tilt, inclination, temperature and humidity, to ensure that a structure is sound.

Each networked sensor quietly and continuously gathers data, after which it is aggregated and sent wirelessly to a data
center, where it is continually analyzed.When a structural issue is detected, alerts are sent out to maintenance or repair
engineers at the first hint of a problem.

Resensys’ sensors can be energy self-sustained, drawing their own power from ambient light and radio waves, or battery-operated. Both types of sensors last, maintenance-free, for decades.

More than 20 companies throughout the U.S., Canada, Indonesia, and Japan have deployed Resensys’ sensors on a wide variety of structures. In the Mid-Atlantic region, they monitor buildings and bridges along I-495.

“We believe Resensys sensors provide very useful information about the structures where they have been deployed,” said Marcus Schmieder, industrial engineer, lean consultant and NDT specialist at Vancouver, Canada-based Metro Testing Laboratories Ltd. “The ease of installation, long life cycle and low cost of these systems convinced us to use Resensys sensors for all of our structural health monitoring projects.”

Since the American Society of Civil Engineers published its first report card for America’s Infrastructure back in 2008, the U.S. has yet to receive an overall grade higher than a D+. More than 71,000 bridges in the U.S. are structurally deficient, according to the Federal Highway Administration’s Our Nation’s Highways 2011 report.

While structural health monitoring is core to Resensys’ product development, the company’s sensors are now being used for a far wider range of applications, including utilities and aviation.

A portfolio company of the Maryland Technology Enterprise Institute (Mtech) Technology Advancement Program in the A. James Clark School of Engineering at the University of Maryland, Resensys is also an Mtech VentureAccelerator graduate and former UMD $75K Business Plan Competition winner. The company has three patents pending.