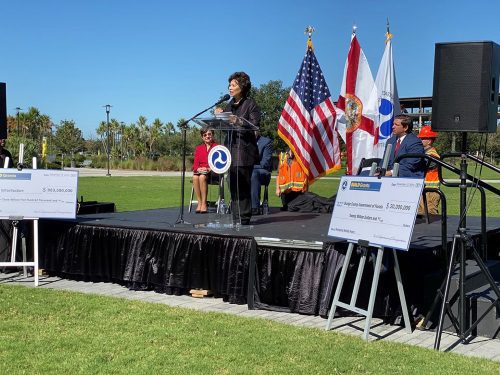 As reported by the AASHTO Journal: https://aashtojournal.org on November 20, 2019 - in Financial, News

The U.S. Department of Transportation officially announced it has awarded $900 million through its Better Utilizing Investments to Leverage Development or BUILD discretionary grants program to fund 55 transportation projects in 35 states on November 12.

[Above photo by the USDOT.]

In a statement, the agency said its fiscal year 2019 BUILD grants are targeted for investments in surface transportation infrastructure – which includes roads, bridges, transit, rail, intermodal, or ports – that will generate a “significant impact” in their local or regional communities.

USDOT noted that 50 percent of that $900 million will fund projects located in rural areas. The agency added that, for this round of BUILD grants, the maximum award is $25 million and no more than $90 million can be awarded to a single state.

Last year, the BUILD program – which replaced the TIGER program in April 2018 – awarded $1.5 billion in funding to 91 projects in 49 states and the District of Columbia, with 62 out of the final 91 awards funding rural projects. That 2018 round of grant awards topped out at $25 million for a single project, while no more than $150 million could be awarded to a single state.

USDOT Secretary Elaine Chao reiterated the renewed focus her agency is placing on rural infrastructure projects during a speech at the American Association of State Highway and Transportation Officials 2019 annual meeting in St. Louis on October 11.

Sec. Chao officially launched USDOT’s new Rural Opportunities to Use Transportation for Economic Success or R.O.U.T.E. Initiative at AASHTO’s annual meeting, noting in her remarks that it will be focused on addressing the “disparities” in rural transportation infrastructure in order to “tangibly improve safety and economic competitiveness.”