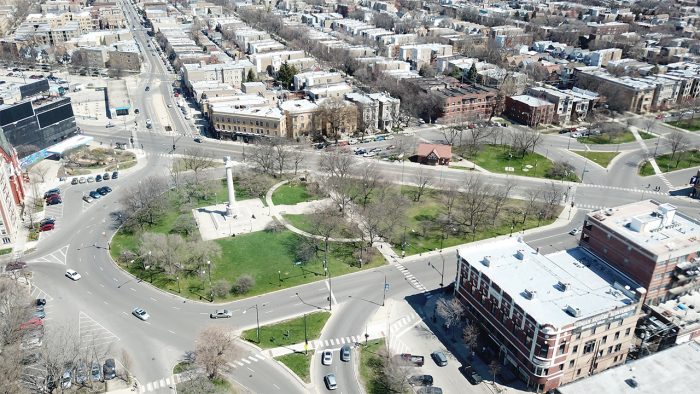 The Chicago Department of Transportation is using public input, big data, and creative traffic engineering solutions to improve safety and accessibility for all users.

Listed on the National Register of Historic Places in 1985, Logan Square is located approximately 3.5 miles northwest of downtown Chicago and marks the northwest corner of Chicago’s historic boulevard system created in the late 1800s. The Chicago Department of Transportation (CDOT) has been reconstructing Milwaukee Avenue in pieces working from northwest to southeast, and the 3.5-mile segment from Belmont on the northwest to the Logan Square intersection on the southeast marks the fifth piece. Recognizing the potential for the project to do more for the community than reconstruct Milwaukee Avenue in its current form, CDOT expanded the study area to include the streets surrounding Logan Square.

One of the things that makes Logan Square unique is the large numbers of people walking, taking transit and biking. About a quarter of households within ½ mile of the study area don’t own a car. Barely more than half of workers within ½ mile of the study area drive to work, while 35% take transit, and 7% bike or walk. Peak hour bike mode shares on Milwaukee Avenue – locally known as the Hipster Highway – approach 10% in the evenings, with the number of bikes continuing to increase further southeast approaching downtown.

However, even with its charm, Logan Square faces some transportation challenges. The streets surrounding the Square can be confusing for drivers, with poor lane balancing and lots of lane changing required over short distances. There are limited places for pedestrians to access the Square’s park space, and some of those crosswalks are very long. And despite the high number of cyclists, there are almost no bicycle facilities.

To remedy these challenges, a group of Logan Square neighborhood residents in 2012 developed a proposal that they called the Bicentennial Improvements Project.  Their vision reimagined the design of the streets surrounding Logan Square, making it more like a roundabout, with one-way streets circulating drivers around the Square at a slow speed, and Milwaukee Avenue removed from the middle of the Square to create a single park space.They also wanted to reconfigure Kedzie Avenue and an existing bus terminal just north of the Square tocreate a new plaza adjacent to local restaurants and businesses.

This proposal was key when CDOT decided to include Logan Square in the overall Milwaukee Avenue design project. “We knew it would be very important to meet with the people who helped create this plan as well as the Alderman and numerous other neighborhood stakeholders,” said Jacobs Buildings, Infrastructure and Advanced Facilities Americas Transportation Project Manager John Wirtz. “During public meetings, we heard that creating public open space was the highest priority, followed by improving pedestrian access to the Square. Maintaining or improving traffic operations wasn’t mentioned very often, but there were concerns about traffic safety for all users.”

We realized early that to study the closure of Milwaukee Avenue through the middle of the Square or to realign Kedzie Avenue as proposed in the Bicentennial Improvements Project, we needed to know more about the origins and destinations of drivers so traffic could be redistributed correctly. “A consulting partner told us about Streetlight, a company that provides Origin-Destination (O-D) analysisusing location services on smart phones and GPS devices,” recalls John. “That data helped us analyze the traffic impacts of the proposed design concepts.”

Based on the existing conditions data we had collected and input from stakeholders, we proposed four design concepts, all of which would improve safety for pedestrians, bicyclists, and drivers to different degrees. First was a relatively minor “Spot Improvements” concept; the second concept was a one-way “Traffic Oval” inspired by the Bicentennial Improvements Project; a third concept was called “Trip Match” and used two-way streets to provide more direct routes for the major origin and destination pairs identified by the Streetlight data; and a fourth concept that modified the Trip Match concept to curve – or bend – Milwaukee Avenue around the north and east sides of the Square became known as “Two-Way, The Bend.”

“The ‘Two-Way, The Bend’ concept came to me when I was working on this project at my dining room table late one night,” says John. “It blends the ideas of the single park space concept from the Bicentennial Improvements Project by ‘bending’ Milwaukee Avenue around the outside of the Square, but also uses two-way streets to match trip patterns to what we saw in the Streetlight data.”

Based on feedback from a public meeting, the study team moved forward with additional analysis on concepts two and four – Traffic Oval and Two-Way, The Bend, respectively. It was determined that concept four improved pedestrian access compared to concept two, with eight access points to the square compared to four, and a shorter spacing between adjacent crosswalks. It also had less delay for drivers than the Traffic Oval concept and provided safer traffic operations by reducing the need for lane changing and weaving. Another feature that the public really liked about “Two-Way, The Bend” was the idea that the two-way street design is more flexible. With two-way traffic, it’s possible to temporarily close one of the perimeter legs around Logan Square for community events such as an existing popular farmer’s market.

“Concept four – Two-Way, The Bend – was selected as the Recommended Alternative because it meets the community’s goals of providing a single open space for Logan Square, better pedestrian access to the Square, separated bike lanes, and better traffic operations and safety than concept two,” said CDOT Project Manager Nathan Roseberry.

Teaming partner Altamanu Inc. developed an internal layout for the Square that embraces and enhances its history.  The major pedestrian paths echo the former alignments of Milwaukee Avenue and the original layout of Humboldt Boulevard.  The Centennial Monument becomes the centerpiece of the Square, with a design very similar to the original layout and clear lines of sight maintained from the boulevard system.