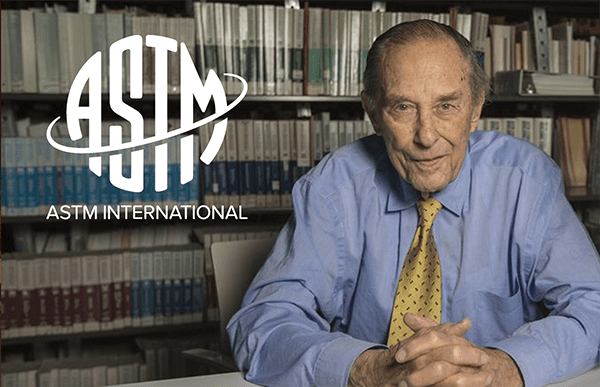 “As a result of his exceptional work on standards over six decades, Werner Gumpertz played a major role in creating a strong technical foundation for our modern built environment,” said ASTM International President Katharine Morgan in a release. “Our board is thrilled to celebrate his legacy by creating just our eighth society-level award in his honor.”

Mr. Gumpertz, who is considered a pioneer of the modern practice of building technology, died in 2017 after a long and accomplished career. He served as a longtime ASTM International member, served as chair of the organization’s roofing and waterproofing committee (D08), and was active in several other committees.

“As a recipient of ASTM International’s Walter C. Voss Award and the William C. Cullen Award, among others, Werner has been well recognized for his achievements, but Werner’s incalculable contribution to standards development, advancement of building quality, and encouragement to those who would pursue these goals, deserved more,” said SGH Consulting Principal Thomas Schwartz, an ASTM International fellow and past chairman of the organization’s board of directors. “This award is a well-deserved celebration of his legacy, and those future recipients whose names ultimately adorn this plaque should have to pass one very high bar.”

ASTM International will present the Werner H. Gumpertz Award annually to an engineer, scientist, or architect who has made significant professional contributions to the field of building technology or to solving multidisciplinary technical problems in the construction industry. Both ASTM International members and nonmembers are eligible for nomination.

“I am thrilled to announce the foundation of this new award, which will honor Mr. Gumpertz’s efforts to encourage others to grow and advance the profession,” said SGH Senior Principal Niklas Vigener, Head of Building Technology. “His leadership, vision, and enthusiasm helped guide the industry for more than sixty years. With this award, his legacy will continue long into the future.”