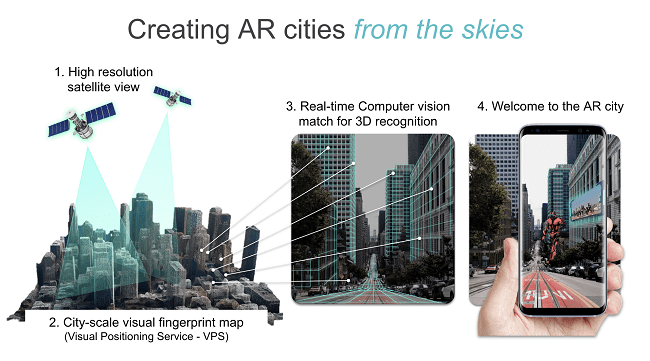 Milpitas, Calif. – Sturfee, a computer vision/AI solutions company, today emerges from stealth with the launch of its City AR technology, which uses satellite imagery and a mobile device to visually recognize the streets around you and digitally enhance them for applications ranging from navigation, tourism, ride-sharing, gaming, outdoor advertising and marketing.

Thus far, cameras have been successfully trained to recognize human faces, but no one has built a similar technology to recognize physical outdoor locations. For the first time, Sturfee has created a computer vision solution that is trained to recognize places on the ground using images from satellites circling the globe. The computer vision platform empowers a user’s camera to instantly recognize surroundings and pull 3D building geometry and ground plane data derived from the satellite sources to give AR applications city-scale spatial understanding. The result is a highly scalable solution capable of powering AR across entire geographies.

Until Sturfee, city-scale computer vision solutions have relied on ground-based scanning using either the devices themselves or cars going up and down the streets – all with help from people. “These are operationally intensive approaches and very costly to scale. With our technology, we can create machine-readable version of San Francisco in just a week, and detect and update any city changes even quicker,” said Anil Cheriyadat, CEO, Sturfee.

Sturfee’s cloud technology currently powers 15 cities on three continents with many more coming soon. Sturfee is production-ready and has signed a multi-year licensing agreement with Japan’s second largest cellular service provider, KDDI Corp, to bring Sturfee’s Visual Positioning Service (VPS) to all major metropolitan areas. In addition, Sturfee has already received orders to integrate the technology with smartphones, wearables and 5G services, and counts some of the world’s largest application companies and smartphone manufacturers among its customers.

Offered as a ‘VPS’ cloud service, Sturfee’s AR City platform for developers is a major step forward to 3D location understanding from the traditional GPS 2D mappings. With a smartphone camera connecting to the VPS service, an application can recognize and orient itself to the user’s surroundings in 3D — in real time.

Here are some of the smartphone applications being built on Sturfee technology:

“As we move toward the 5G era and address spatial computing, we will create a new communication scene and with Sturfee we will build a variety of new experiences that will thrill our customers. We envision digital signage and navigation linked to location information, as well as advertising, entertainment, art and education,” said Yasuhisa Yamada, Director of Personal Business Sector, KDDI.

The Sturfee SDK and information for developers is available here: https://sturfee.com/product/ 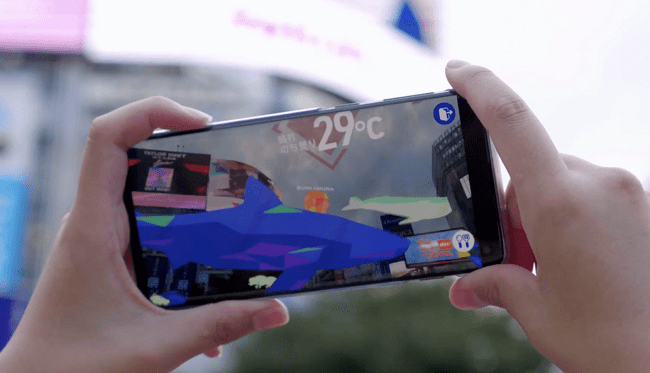 About Sturfee
Sturfee enables world-scale AR using satellite imaging to quickly analyze and organize ground data and build a 3D mesh of the city. The company is creating core spatial intelligence technology so devices can accurately understand and match a smartphone to its local surroundings. Sturfee founders previously worked on satellite imagery at DoE US National Labs and the company has received $4 million in seed funding. For more information, visit www.sturfee.com.