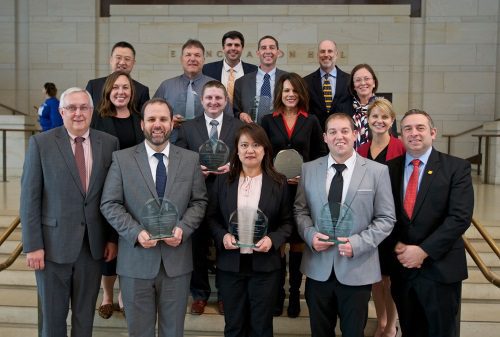 As reported by the AASHTO Journal: https://aashtojournal.org on October 30, 2019 - in Awards, News

The Federal Highway Administration and the Roadway Safety Foundation honored seven highway safety projects in five states with National Roadway Safety Awards as part of a biennial program to highlight successful approaches to improving roadway safety at the state and local level.

“While our roads and vehicles have gotten safer over the years, clearly motor vehicle crashes still take a tremendous toll,” said RSF Executive Director Greg Cohen in a statement.

“These awards honor those who successfully identified dangerous deficiencies in their systems and applied our latest research and technology to implement effective and cost-efficient fixes,” he added. “We salute these winners – the unsung heroes who planned, engineered and implemented these innovative solutions – and urge DOTs across the nation to consider these projects and apply them wherever possible.”

FHWA Executive Director Tom Everett noted that the seven award winners were commended “not only in saving lives on our nation’s roads, but also for maximizing the cost effectiveness of federal, state, and local funds that were used.”

Applicants were encouraged to nominate successful programs that were “innovative, cost-effective, and could be replicated elsewhere.” Altogether, seven winners and one honorable mention were selected: