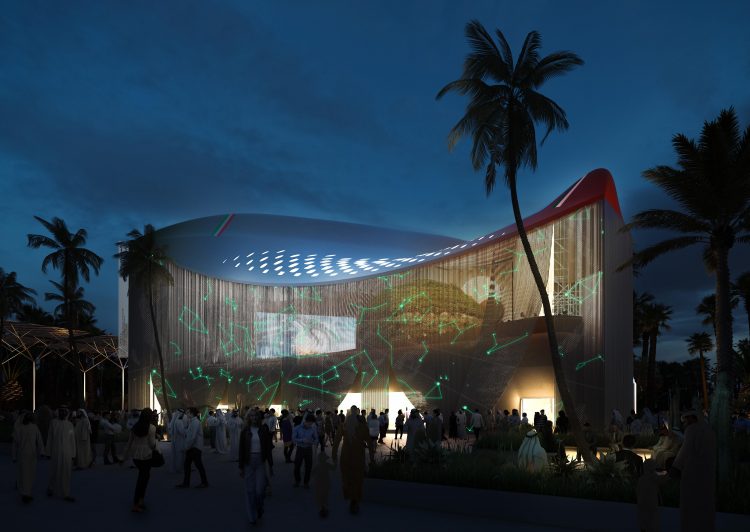 The Pavilion, officially unveiled in collaboration with the Italian Ministry of Foreign Affairs and the U.A.E., is made out of three boats, which will embark on a figurative journey to Dubai and will be converted into the roofscape of the structure before moving on after Expo 2020 – as an exploration into recycling, circularity and digitally reconfigurable architecture

Exactly one year before the opening of the World Fair in Dubai (Expo 2020), Italy unveils the final design for its national pavilion, conceived by CRA-Carlo Ratti Associati, Italo Rota Building Office, matteogatto&associati and F&M Ingegneria. As if docking after a journey by sea, three boats will arrive in Dubai and become the backbone of the pavilion, part of an exploration into recycling, circularity and reconfigurable architecture. The Pavilion will open its doors to the public on October 20th, 2020, in Dubai, U.A.E., and will remain open until April 10th, 2021. 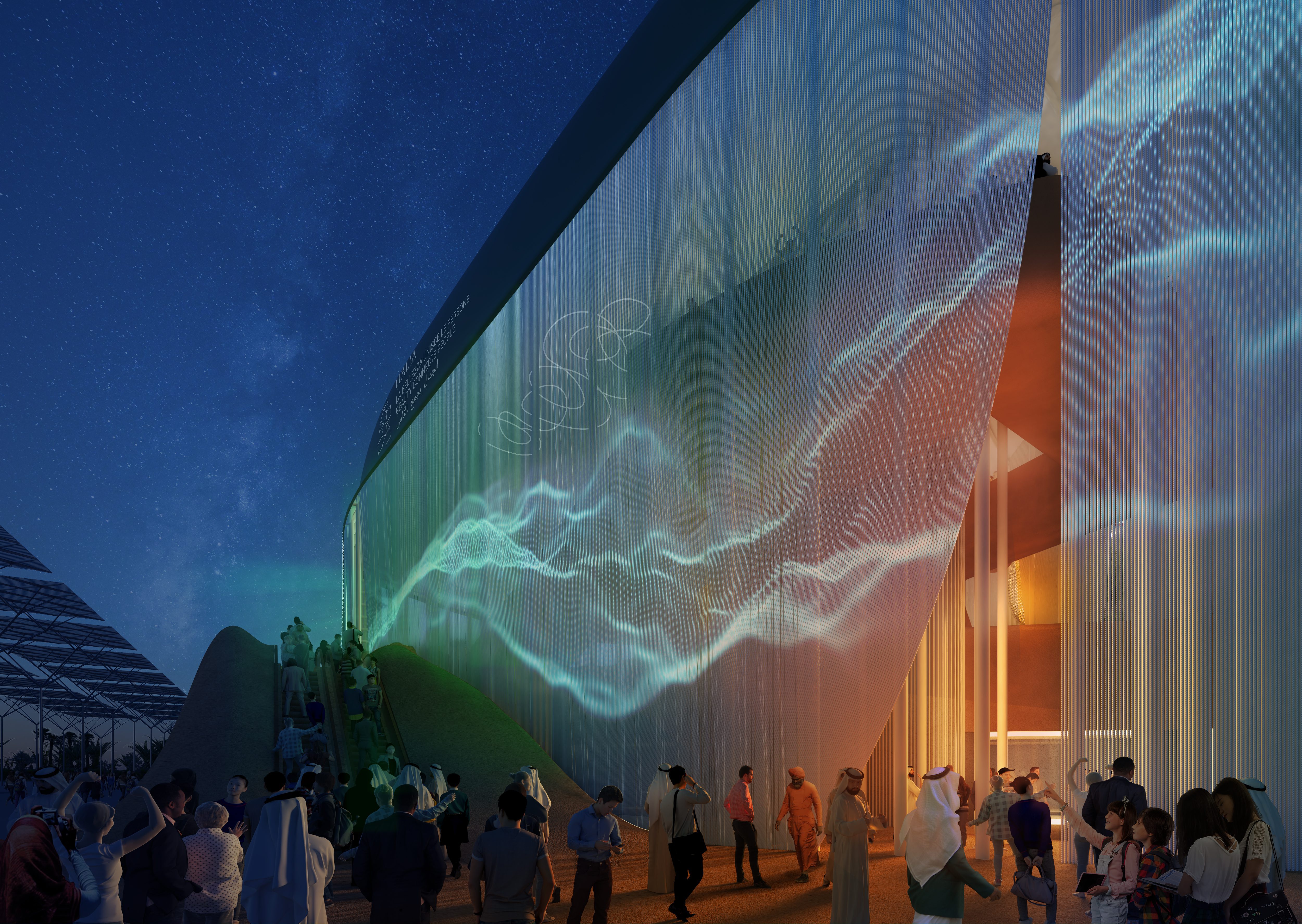 The radical design is based on a circular approach to architecture. Three boats will arrive in Dubai and will be converted into the pavilion’s roofscape. In a similar way, the project integrates sustainable materials – such as orange peels, coffee grounds, mycelium and recycled plastic extracted from the ocean – as construction elements.

The pavilion is exposed to the atmosphere, using natural climate control strategies instead of air conditioning. Space is delimited by an adaptable façade made of LED curtains and nautical ropes, which will create a digital layer able to broadcast multimedia content.

“We liked the idea of a pavilion that would continuously mutate into different forms,” says Carlo Ratti, founding partner of CRA practice and director of the MIT Senseable City Lab at the Massachusetts Institute of Technology (MIT). “We pursued a kind of architecture that could be reconfigured both in the long term – because of its circularity – and in the short term – thanks to digital technologies.”

“The pavilion is circular in nature. Nothing goes to waste; instead, we reclaim it and reimagine its purpose,” says architect Italo Rota, founding partner of Italo Rota Building Office. “The sea will figuratively enter the structure through one of its living organisms, seaweeds, which will be used to produce energy and food.” 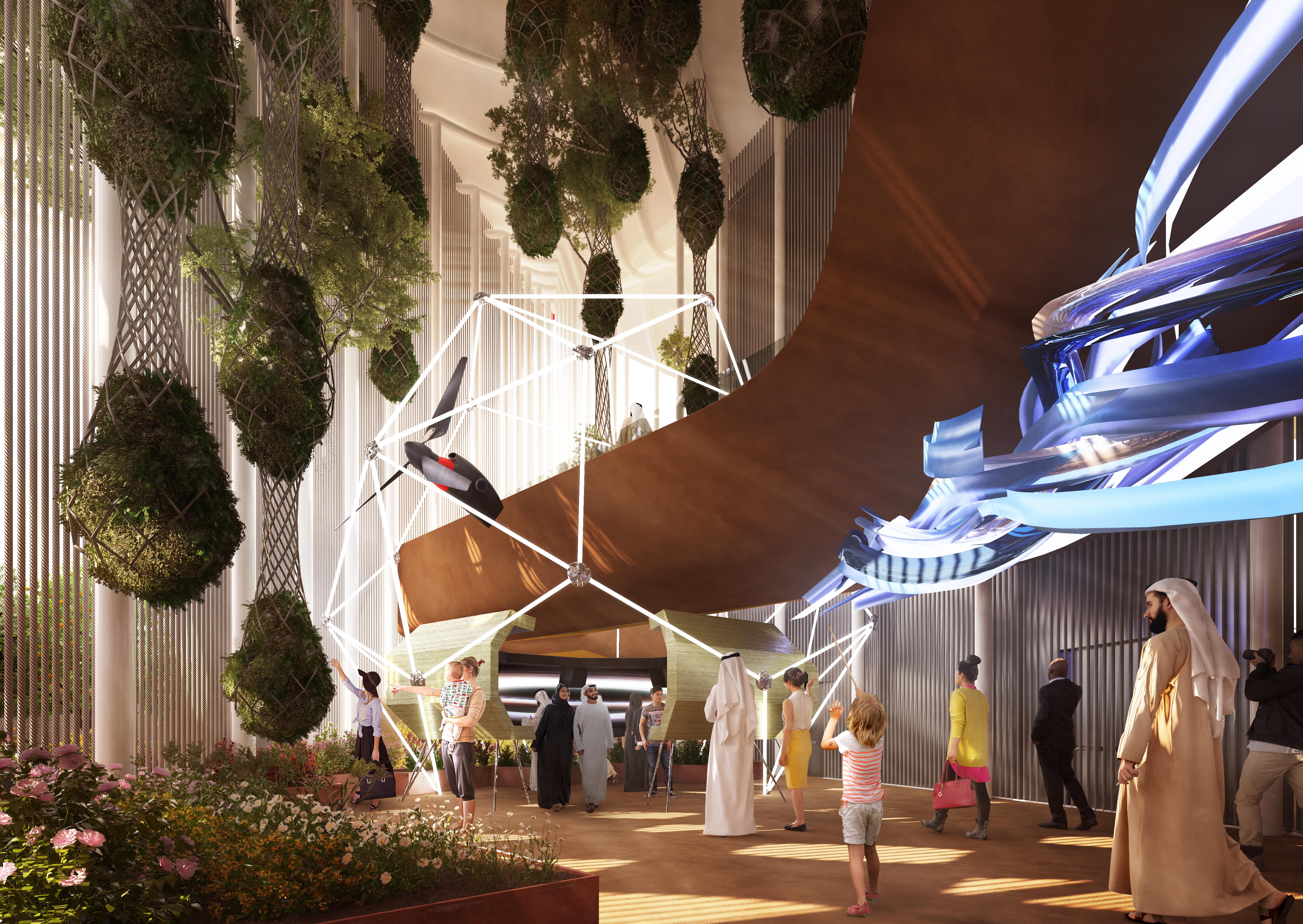 The pavilion’s roof is a sinuous surface that recalls sea and desert waves. The base of the pavilion is carved out of a giant sand dune, accessible to people. The project makes a conscious effort to integrate materials that hint at Dubai’s local geography, as well as organic waste to experiment with more sustainable building practices and engage with the circular economy. For instance, the exhibition will stretch over a dune made with real sand, while the skywalk will be clad in innovative materials obtained from discarded orange peels and used coffee grounds.

The project explores the importance of history, tradition and memory in sparking innovation, while paying tribute to the seafaring populations that have inhabited the Mediterranean basin through history, shaping a common cultural heritage. 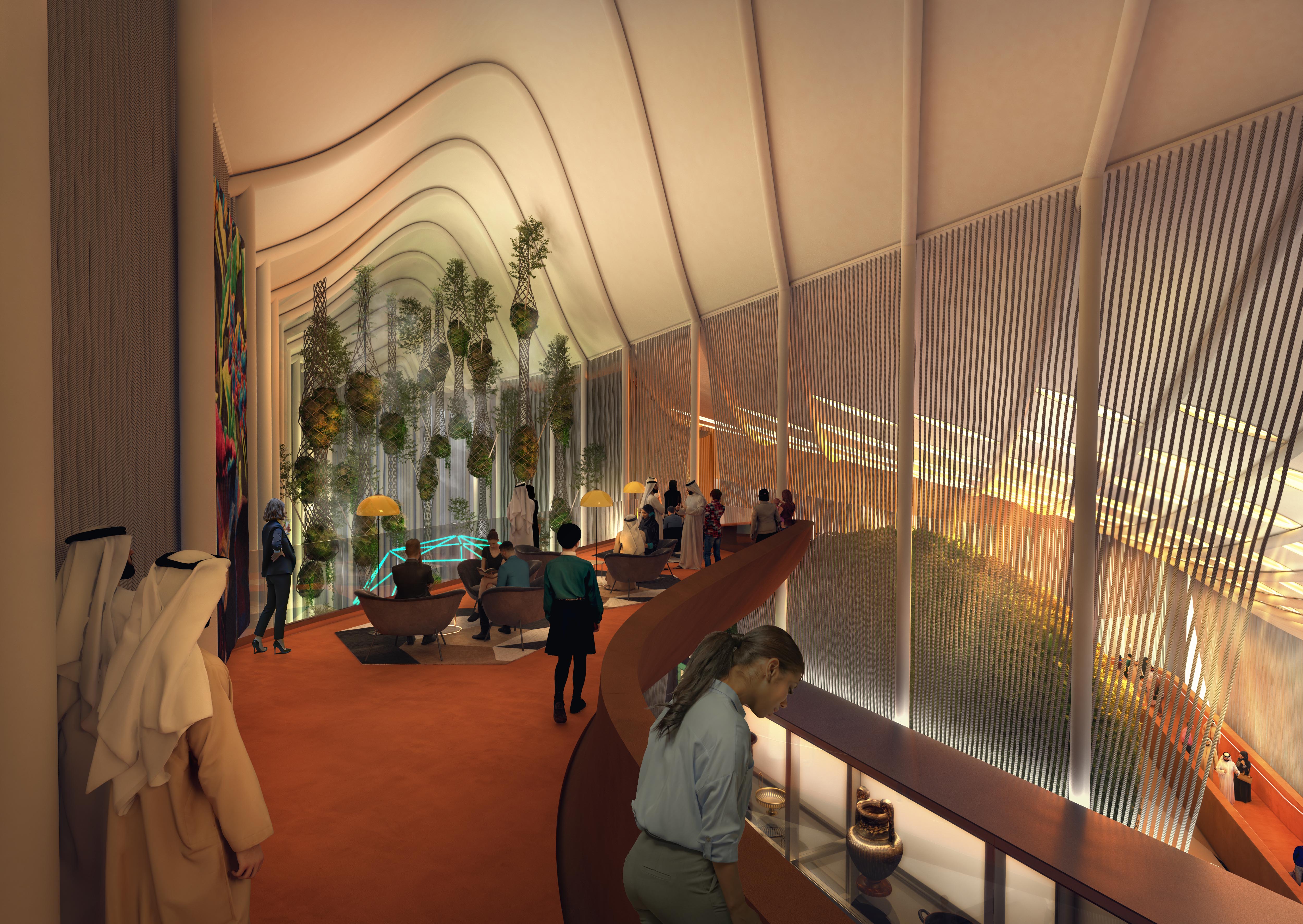 “Italy brings an Innovation Hub to Expo 2020,” says Paolo Glisenti, General Commissioner for Italy at Expo Dubai 2020. “A pavilion with an innovative structure, inspired by the most advanced elements of sustainability and circular economy, which will not simply be an exhibition venue, but a demonstration of Italian competence and the best national talent”.

The pavilion continues CRA’s ongoing experimentation with innovative exhibition structures at World Fairs. Previous projects include the Digital Water Pavilion, a water-based structure at Expo Zaragoza 2008 that employed sensors to interpret and react to people’s movements–and was named by Time magazine one of the “Best Inventions of the Year”– and the Future Food District, an interactive retail space developed for Expo Milan 2015.

A project by CRA-Carlo Ratti Associati and Italo Rota Building Office, with matteogatto&associati and F&M Ingegneria

CRA-Carlo Ratti Associati is an international design and innovation office, based in Turin, Italy, with branches in New York and London. Drawing on Carlo Ratti’s research at the Massachusetts Institute of Technology, the office is currently involved in many projects across the globe. Embracing every scale of intervention – from furniture to urban planning – the work of the practice focuses on innovation in the built environment. Among recent projects there are the master plan for Milan’s Science, Knowledge and Innovation Park (MIND-Milano Innovation District); a 280-meter tall green skyscraper in Singapore co-designed with BIG; the redesign of the Agnelli Foundation HQ in Turin; the requalification of the Patrick Henry military village for IBA Heidelberg in Germany; the Pankhasari retreat in India’s Darjeeling; and the concept for a human-powered “Navigating Gym” in Paris. CRA is the only design firm whose works have been featured twice in TIME Magazine’s Best Inventions of the Year list respectively with the Digital Water Pavilion in 2007 and the Copenhagen Wheel in 2014. In the last years, the office has also been involved in the launch of start-ups, including Makr Shakr, a company producing the world’s first robotic bar system, and Superpedestrian, the producer of the Copenhagen Wheel.

Carlo Ratti (1971, Turin), an architect and engineer, is a founding partner of the international design and innovation practice CRA-Carlo Ratti Associati and teaches at the Massachusetts Institute of Technology (MIT), where he directs the Senseable City Lab. A leading voice in the debate on new technologies’ impact on urban life and design, Carlo has co-authored over 500 publications, including The City of Tomorrow (Yale University Press, 2016, with Matthew Claudel), and holds several technical patents. His projects combine a scientific approach with a humanist perspective, and have been exhibited in several venues worldwide, including the Venice Biennale, Rome’s MAXXI, Barcelona’s Design Museum, London’s Science Museum and New York’s MoMA. Among CRA’s most recent works, there are the master plan for MIND-Milan Innovation District, the 280-meter-high skyscraper CapitaSpring co-designed with BIG in Singapore, the renovation of the headquarters of the Agnelli Foundation in Turin, the thematic area Future Food District for Expo Milano 2015 and the Pankhasari Retreat in Darjeeling, India. Listed by Wired as one of the “50 people who will change the world,” Carlo Ratti serves as co-chair of the World Economic Forum’s Global Future Council on Cities and Urbanization, and was nominated chief curator for the Bi-City Shenzhen Biennale of Urbanism\Architecture that will open in Shenzhen, China in December 2019.

Italo Rota Building Office is an international architectural office founded by Italo Rota and based in Milano, Italy. With over thirty years of constant and advanced multidisciplinary research, IRBO develops innovative projects where humanistic beauty and sustainability are integrated in fields that extend to contemporary art and robotics. Aiming at the priority of achieving new living systems for the city of the “extreme present”, IRBO applies the most advanced technologies collaborating with labs, design firms and international universities. The office counts on the balance between art and science in its design research, creating a poetic manifestation that sustains the creation of projects with a new notion of beauty, a notion that according to Gardner “is the capacity of generating interest by a memorable form and an attitude of evoking further explorations.”

Italo Rota (1953, Milano) is a graduate of the Polytechnic University of Milan. Upon winning the competition to design the interiors of Musée d’Orsay in the 80s, Rota moved to Paris working on many important projects in France among; the renovation of the museum of Contemporary art at the “Centre Pompidou”, with Gae Aulenti, the hall of the French school at Cour Carré of The Louvre museum, the lighting of Notre-Dame Cathedral, the lighting of the banks of the Seine river in Paris and the renovation of the historical center of the city of Nantes. Rota returned to Milano in the 90s to become one of the leading architects of a new architecture, designing important projects in Italy and the world. More recently, IRBO has designed the civic museums of Reggio Emilia, the new Elatech robot factory in Brembilla, the grand children theatre in Maciachini Milano, the new pavilion laboratory Noosphere at the Triennale di Milano, The pavilion of Kuwait at EXPO Milano 2015, the pavilion of Italian wine and the pavilion of Arts and Foods. Among IRBO’s symbolic projects, the Museo del Novecento in Piazza Duomo in Milan, the headquarters of Columbia University in New York, the Hindu Temple in Dolvy in India. The office worked on exhibitions in major museums, publications, installations and pavilions, including the Pavilion central theme for Expo Zaragoza 2008. Rota is the Scientific Director of NABA, New Academy of Fine Arts in Milan, lecturer at Shanghai Wusong International Art City Shanghai Academy of Fine Arts, Advisor at the Tsinghua University of Beijing, one of the most prestigious Chinese universities. Italo Rota has been awarded several prizes, including the Gold Medal for Italian Architecture for the spaces public, the Gold Medal to the Italian Architecture for Culture and Leisure, the Landmark Conservancy Prize, New York and the Grand Prix de l’Urbanisme, Paris.

During his career, Matteo Gatto has followed many of Milan’s major projects of urban transformation, has served as Chief Architect of Expo Milano 2015 and has coordinated the design for the venue of Matera2019. Winner of numerous awards and scholarships, he has been published on and writes for various international magazines, is lecturer in many universities and has been an exhibitor at numerous international exhibits. matteogatto&associati is a creative hub of architects and artistic directors, born from the experience of designing Expo Milano 2015, deeply focused on major events and projects on a metropolitan scale, and on creating experiences and raising emotions and wonder at every scale: from the spoon to the city. matteogatto&associati provides solutions and strategies for major events, urban projects and real estate, design, branding and wayfinding.

F&M Ingegneria is a leading engineering company providing cutting-edge design solutions in the sector of civil engineering, infrastructure, project management and sustainability. F&M Ingegneria controls F&M Retail, headquartered in Germany and specialized in the retail sector, and F&M Middle East, with HQ in Oman and working throughout the Middle East. With several offices in Italy and abroad, F&M Ingegneria operates in different fields, from the renewal of large areas to the renovation of important historic buildings; from infrastructural works (logistic centers, airport and railway terminals, harbors, roads, bridges and underground works) to the realization of prestigious buildings (health and sport facilities, places of worship and educational centers) and large trade centers. F&M has gained considerable experience in Expo projects, having successfully completed several temporary and reusable buildings, among which three pavilions for Expo Shanghai 2010 and more than ten pavilions for EXPO Milan 2015.