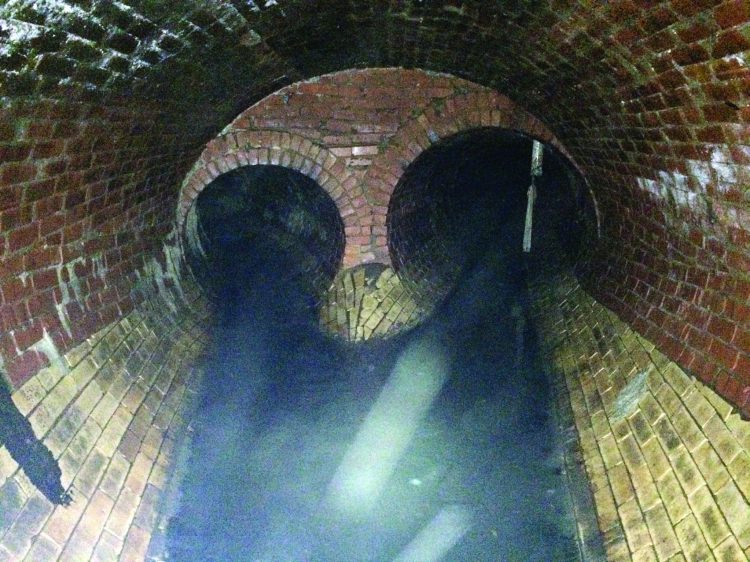 The Washington, D.C., sewer system (managed by DC Water) is a mix of pipe systems that includes large-diameter brick structures. Following an alert from the District Department of Transportation (DDOT), DC Water’s engineering group carried out a pipe entry inspection to verify the integrity of a 72-inch-diameter brick sewer on the F Street NW block between 12th and 11th streets. 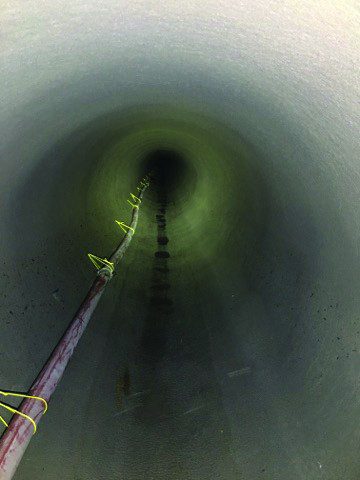 DDOT had performed a borehole inspection at a street depression that revealed a 20-inch-deep void under the pavement near a 188-foot section of the 72-inch brick sewer that was offset and replaced with 205 feet of 72-inch reinforced concrete pipe (RCP) in the 1970s. This modification was necessary to accommodate construction of air-conditioning piping for the Metro Subway at 12th and F streets.

The entry inspection showed the replaced 72-inch RCP section was sound. At the interface with the RCP, however, the brick crown was cracked and propagating east toward 11th Street and west toward 13th Street. The most severe damage was between 12th and 11th streets, where the “12 o’clock” crown was cracked and missing bricks. Fortunately, there was no significant oval deformation, and there were only a few open mortar joints.

Further inspection revealed two abandoned taps that were more than 90 percent filled with soil. One of these was within 3 feet of the void below the pavement. Engineers suspected a leak in the air-conditioning return piping for the Metro Subway was causing mud to form in the area and that vibration from the subway was producing additional soil consolidation and settlement. Fortunately, because the roads in Washington, D.C., primarily are 10-inch reinforced concrete, there was only a slight surface depression. (As a note, if Washington, D.C., had asphalt roads, sinkholes could be far more numerous and destructive.)

DC Water engineers recommended grouting the taps, fixing the leaky air-conditioning pipes, and structurally lining the worst of the fractured brick sewer between 12th and 11th streets to restore integrity. Being proactive in solidifying the compression ring inside the brick arch was viewed as an effective form of preventive maintenance. With a plan agreed, the next step was to determine how the repair would be made.

Two repair methods were considered and dismissed at the outset. The first of these was a steel tunnel plate, which had been used successfully on a 2013 emergency repair at 14th Street NW and G Street. With this approach, an annular space would be grouted, and the steel liner would be sprayed with a corrosion-protective layer of either calcium aluminate or geopolymer. This option would not require removal of the manhole cone or frame and would provide a true new pipe-in-a-pipe solution. However, it would not be cost-effective and would severely reduce pipe capacity.

The second repair option rejected was cured-in-place-pipe (CIPP). Because the entry manholes were only 20 to 30 inches wide, placing a 72-inch CIPP liner would require removing the entire manhole for access. In addition, if any pavement required patching, DDOT requires the entire intersection be repaved, which would add considerable cost and result in a longer disruption to traffic and pedestrians. Furthermore, CIPP has a large construction footprint, specifically for over the hole wet-out, which would have been required in this case. Another drawback was presented by the decision to carry out the project only during the night. This meant that during wet weather and every morning, flow would need to be restarted, which would not be possible with CIPP technology.

A more-viable option was centrifugally cast concrete pipe (CCCP), but this method was disqualified because engineers at DC Water didn’t believe the portland cement would provide the desired corrosion protection.

After carefully assessing the options, DC Water elected to use spincast geopolymer pipe (SCGP) or shotcrete calcium aluminate pipe (SCCAP), believing these two trenchless technologies would provide excellent corrosion protection and would be relatively simple to install. The thin, environmentally friendly structural liners have a small construction footprint. They do not require removal of the manhole frame and cover, and are comparatively cost-effective to execute. 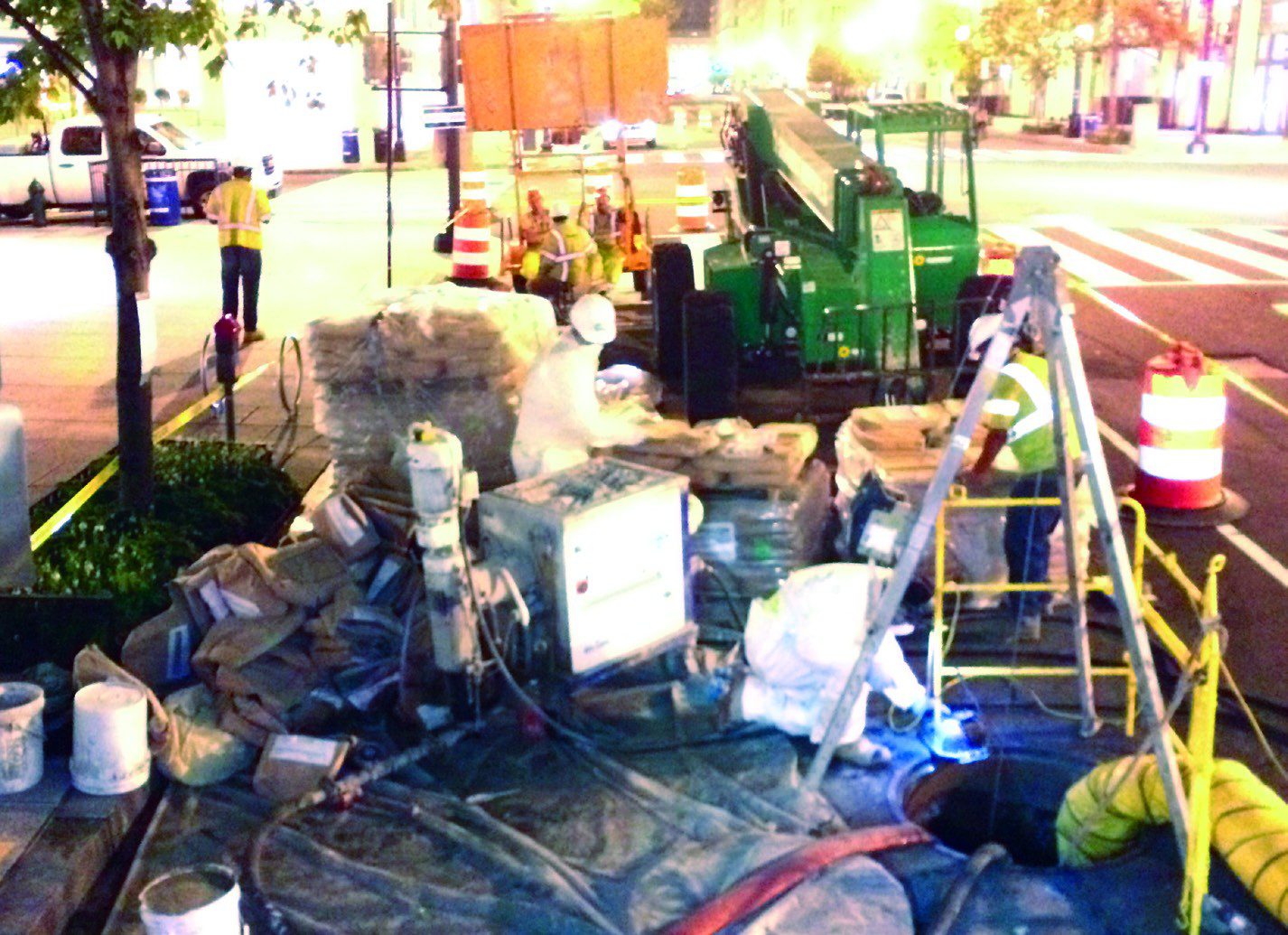 Each evening, material and equipment were moved onto the site at 7 p.m. before crews set up safety measures and bypasses.

DC Water granted approval for geopolymer lining systems as a corrosion-resistant, structural pipe-rehabilitation solution in Fall 2015. Originally, the scope of work for the rehabilitation included full structural repair of a 50-foot section (that was missing bricks and showing signs of advanced crown deterioration) and structural support for a partially deteriorated 125-foot section where inflow and infiltration also would need to be provided.

After further inspection, however, DC Water requested a change order for a full structural repair of the pipe. Because the F Street thoroughfare is a heavily trafficked business and tourist area, all work would be completed at night to minimize traffic disruption and bypass requirements.

When people hear “geopolymer,” they often think of plastic, which is incorrect, although geopolymer shares plastic’s low porosity and corrosion properties. In fact, geopolymer concrete looks and feels like portland cement concrete, but offers some advantages that make it superior for pipe and manhole rehabilitation, including:

On the 12th Street project, IPR and DC Water acquired detailed project maps, sewer-flow volume information and traffic-control data. The repair was performed on a combined sewer overflow (CSO) pipe where there was a continuous daytime flow in an area where traffic was congested. This information provided the team with insight on challenges they would have to account for during rehabilitation. 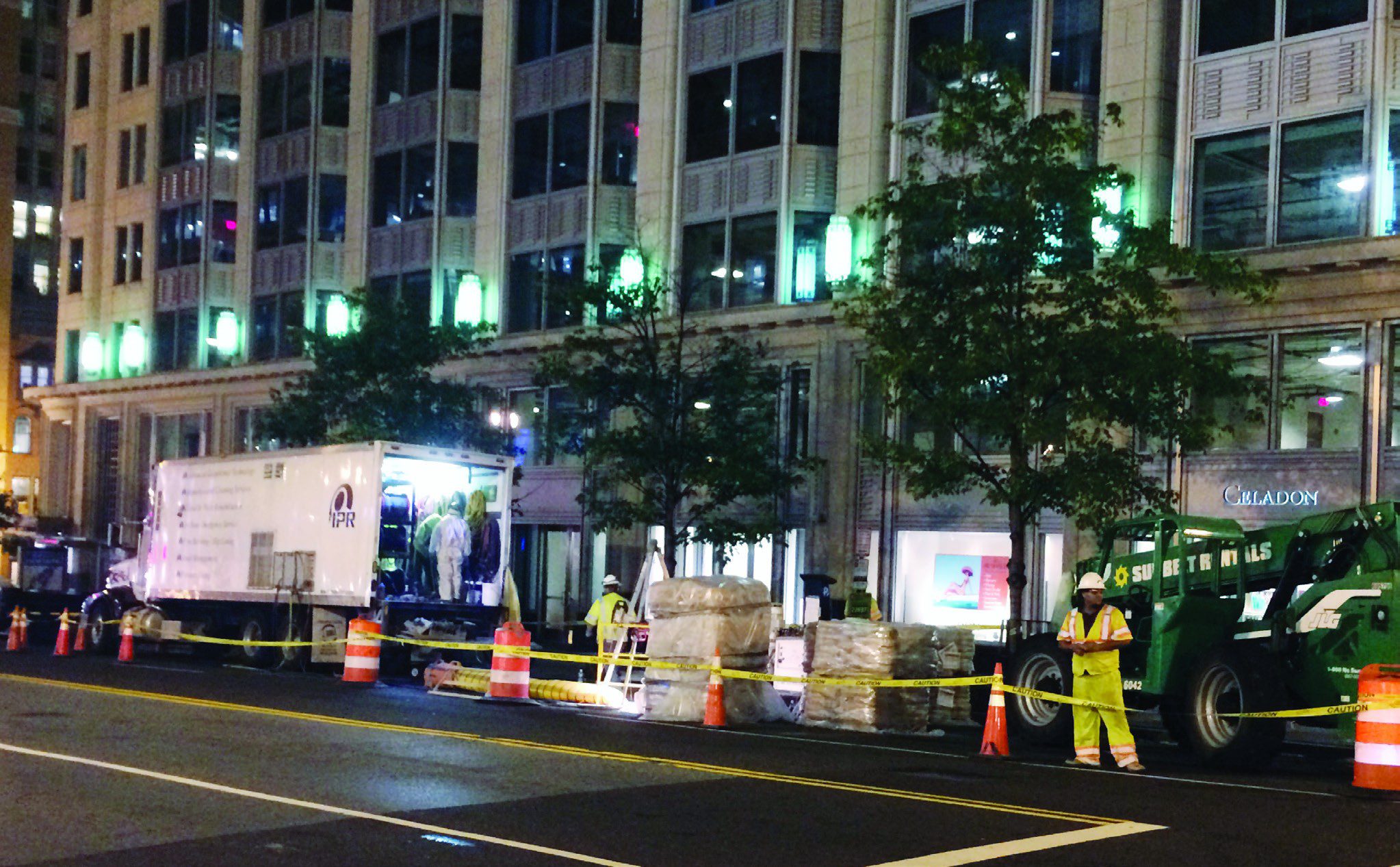 Based on manhole access, the right travel lane, parking lane and whole block length of about 200 feet were secured as a work space.

Talks among the stakeholders (e.g., DC Water, Anchor Construction, IPR, residents and business owners) led to the decision to carry out construction at night to minimize car and pedestrian traffic impacts and reduce worker safety risks. Because of the large number of office buildings, daytime work would have to accommodate a large bypass volume. Working at night reduced the required bypass volume and decreased the flow, permitting use of a 6-inch pump, which would not have been adequate during the day.

F Street has a parking lane on both sides and two lanes of traffic in each direction with manhole access in the center of the right traffic lane. Parking was prohibited as was traffic in the right travel lane during construction, which was scheduled to take place between 7 p.m. and 5 a.m. Monday through Friday. The project footprint was designed to accommodate the following:

• A telehandler to move the pallets

Generally, a minimum area of approximately 12 feet by 75 feet is desired, but because the manhole access was in the right travel lane, the parking lane on the right side of the street and the right travel lane were closed the entire length of the block (about 200 feet) as a work space. Having a larger work area improved mobility and supported work vehicles onsite, which would be parked offsite under normal conditions. The wider work zone also provided a broader construction safety area.

If the flow rate is manageable, IPR can provide an internal bypass (which is done by running the bypass line inside the sewer), spraying most of the pipe, moving the line over and spraying the location where the line had been. DC Water considers internal bypass an attractive option for lining projects. For this project, however, it was simple to set up the external bypass along the curb line, eliminating the need to cross the street.

While work was being done onsite, Anchor Construction provided traffic control, mobilizing material and equipment each evening at 7 p.m. and setting up safety measures and bypasses.

Following a video inspection, technicians used a minimum 3,500 psi pressure wash to clean the host pipe of loose debris and material, and applied hydrophobic grout to address joint leakage and infiltration. Missing bricks and irregular shapes were filled in to establish a rounded template. An advantage of the GeoSpray geopolymer is the surface did not need to be dry before the installation process began, therefore wait time was reduced.

The site crew blended 50-pound bags of dry geopolymer powder, closely monitoring the blending process while pumping the material to the spincast head in the pipe. The IPR EcoCast centrifugal casting process uses a spinning head that throws the geopolymer mortar on the pipe walls. It employs a chain-driven system to retract a sled through the pipe at a precisely monitored speed to apply a consistent desired thickness to the perimeter walls. During this installation, a certified third-party laboratory performed quality assurance (QA) compression and flexural tests to verify proper installation. IPR delivered this detailed QA/quality control report with pre- and post-process video inspections, QA material testing, daily material usage and crew logs at the conclusion of the project

Before any lining was placed, technicians removed all loose scaling materials and slime layers. Cleaning prepared the surface for the geopolymer and uncovered any problem areas such as crack voids and active infiltration that would need to be addressed. After cleaning and grouting were performed, the team placed depth-gauge markers throughout the sewer to help confirm liner thickness. Concrete screws were set to a depth of 2.25 inches to accommodate the screw head being covered with a 2.5-inch-thick lining. (It’s also possible to estimate the average thickness of the lining based on the amount of material applied over a given area.)

A benefit of using the GeoSpray geopolymer is that flow can be returned after about a two-hour cure, so bypass operations didn’t need to be maintained for more than a few hours. Generally, IPR finished spraying a little before 3 a.m., so the team could demobilize and return flow by 5 a.m.

Most construction projects don’t require wire mesh, but because of the cracking and missing bricks in the crown, DC Water requested wire mesh to be used as an added safety measure. Including wire mesh on the crown meant technicians would have to apply approximately 1.5 inches of geopolymer and allow it to cure overnight before installing the wire mesh. After the wire mesh was placed, IPR applied an additional 1-inch geopolymer mortar layer on top of the mesh.

The complete repair was concluded in early July 2016, effectively restoring the brick structures to safe service after only about three weeks of work onsite.

Note that in this first phase of construction between 12th and 11th streets, 2.5 inches of geopolymer and wire mesh were used on a 72-inch brick pipe. The initial ClockSpring|NRI design indicated 1.5 inches of geopolymer material would suffice; however, DC Water wanted a more-conservative repair on the first phase. The second phase of construction began between 12th and 13th the following spring. At this location, there also was a crack in the crown, but in this case, it was slightly larger, with a diameter of 76 inches. Only 1.5 inches of geopolymer was used without wire mesh. DC Water plans to monitor both installations, which will experience similar conditions through time, to determine the value of using wire mesh for these types of repairs.

The vast majority of geopolymer pipeline project designs don’t require wire mesh. DC Water understands that mesh can increase ductility and initial safety factors for short-term benefits. Until the wire engages in tension, however, it can lower the threshold for minor cracks to occur, and there’s concern that wire mesh can corrode and possibly be more detrimental in the long run. This project is a perfect testing ground for this long-term evaluation.