/ Articles / We’re Not Bluffing: Erosion Is a Serious Issue

We’re Not Bluffing: Erosion Is a Serious Issue 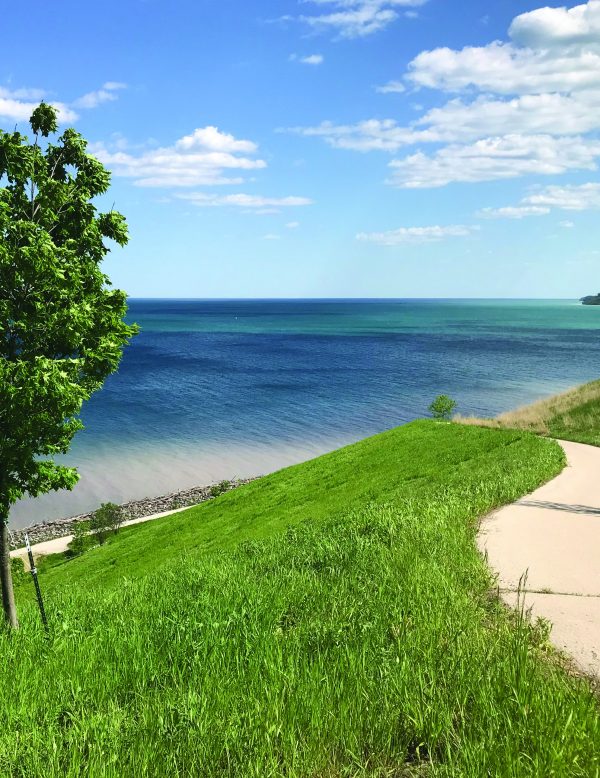 The North American Great Lakes account for roughly 21 percent of the planet’s surface freshwater and 84 percent of North America’s surface freshwater. If you haven’t had a chance to look across one of these truly magnificent lakes, add it to your to-do list. Not only are these lakes beautiful, biodiverse and full of rich history, but they provide a resource that will only become more important as population increases, polluted waters become the new “norm” and people’s lives become truly dependent on the availability of freshwater resources. 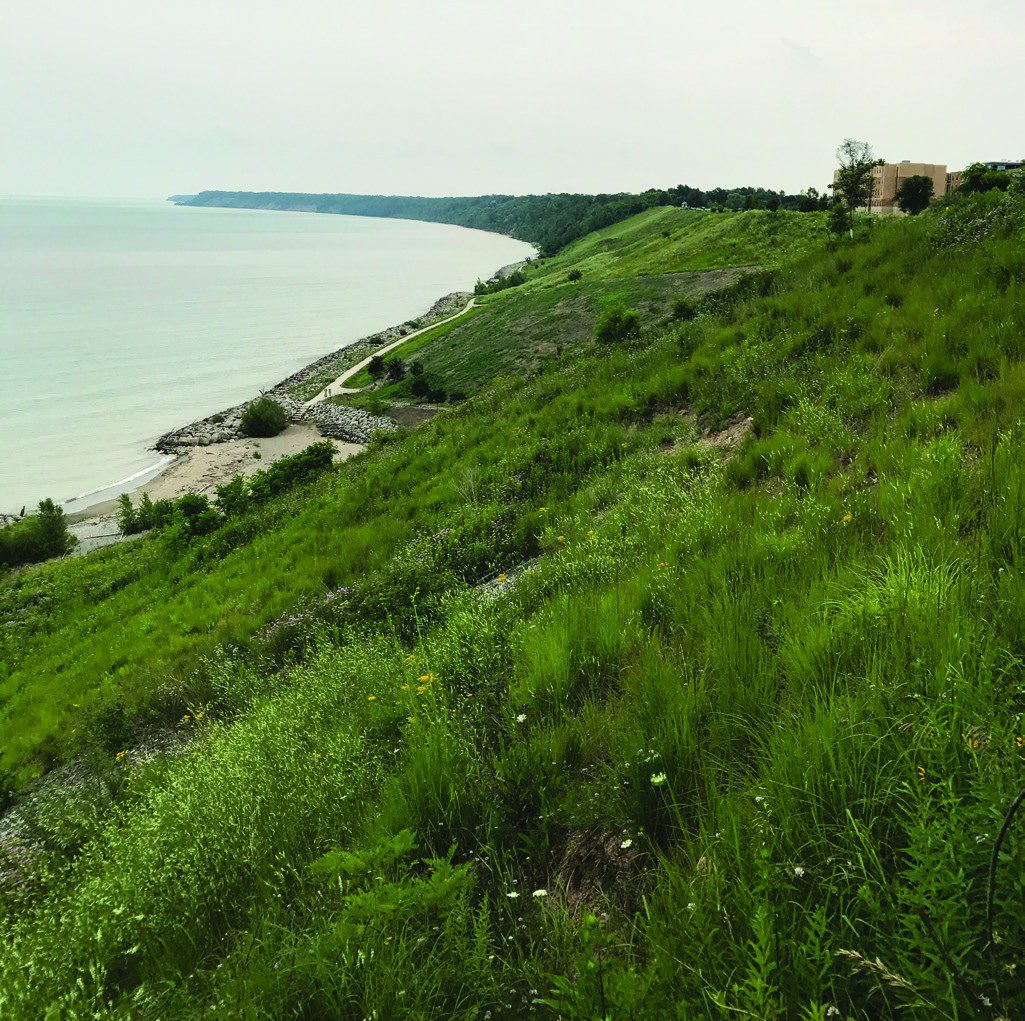 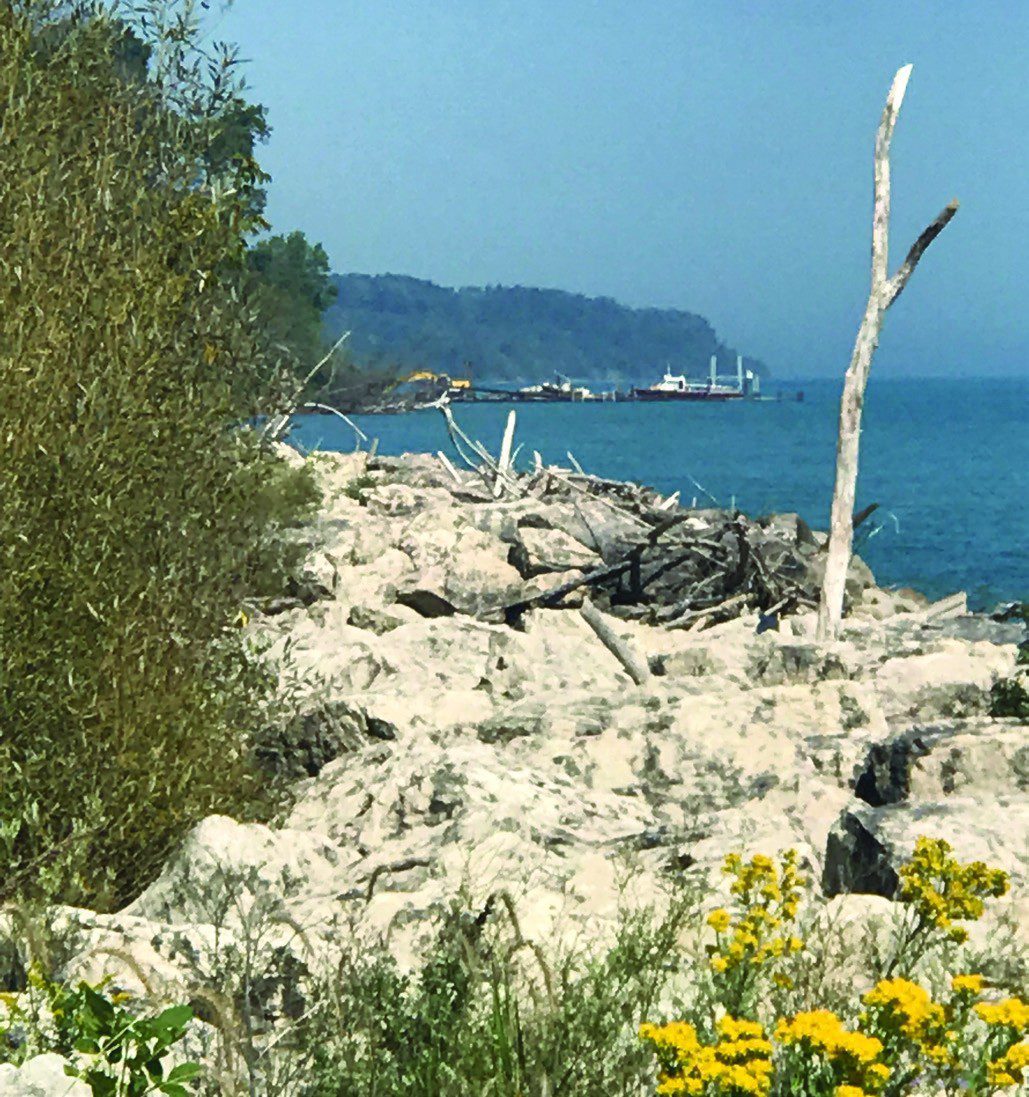 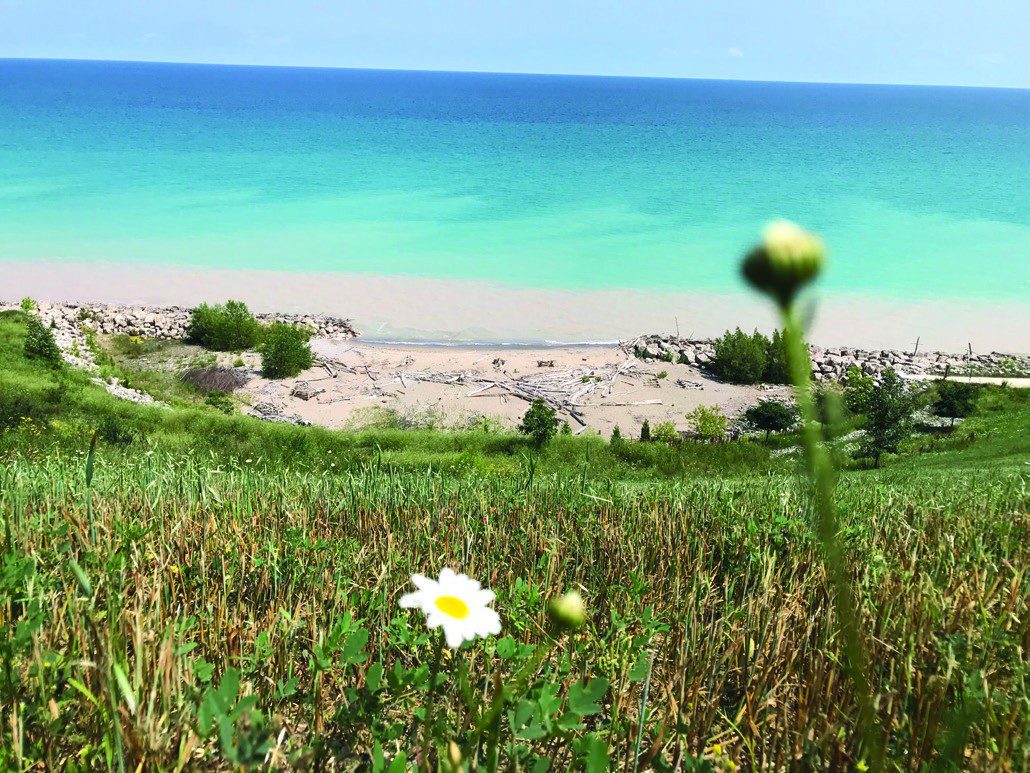 Concordia University in Mequon, Wis., sits perched atop a Lake Michigan bluff that extends from Fox Point to Sheboygan, Wis. Above the steep terrain, you’re offered stunning views of Lake Michigan, and, as you scale down the embankments, you’ll note the large boulders that protect the shoreline from coastal erosion. The boulders were introduced during a bluff restoration and shoreline protection project that was a top-five finalist for the American Society of Civil Engineers (ASCE) Outstanding Civil Engineering Achievement Award in 2010. Initially, the project seemed extremely successful and appeared to be closed out without issue.

Through time, however, the extreme slopes (mostly > 2H:1V) began experiencing localized erosion. As erosive forces took hold, the issues piled on. Small eroded areas, caused by uneven vegetation establishment and the presence of shallow-rooting invasive species, turned into much larger rills and gullies. Ultimately, sediment began aggrading in the rock-lined swales. As the swales filled with sediment, runoff from precipitation events that were far less significant than the original site was designed to withstand, overtopped the swales and led to considerable erosion issues. To this day, this particular issue is being remediated.

Other areas were affected by the shallow-rooting invasive species in a much more direct manner. Roots only penetrating the substrate a few inches led to shallow sections of the bluff sloughing off. 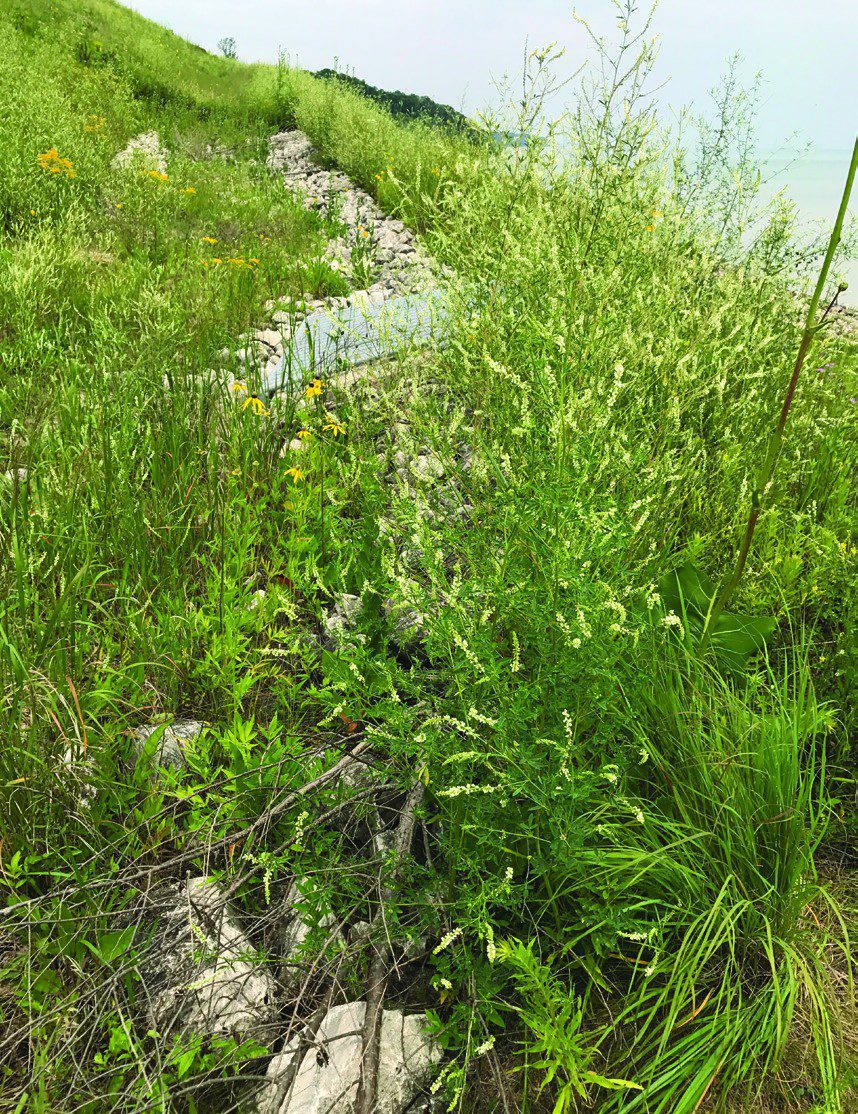 Aggradation in a ripraplined channel shows vegetation establishing in the substrate that was added through erosion of the slope above and sedimentation (above). As sediment settled in the channel (below), the channel’s capacity decreases substantially. Relatively small storms began exceeding the channel’s capacity, and gullies began washing out as the berm was overtopped. 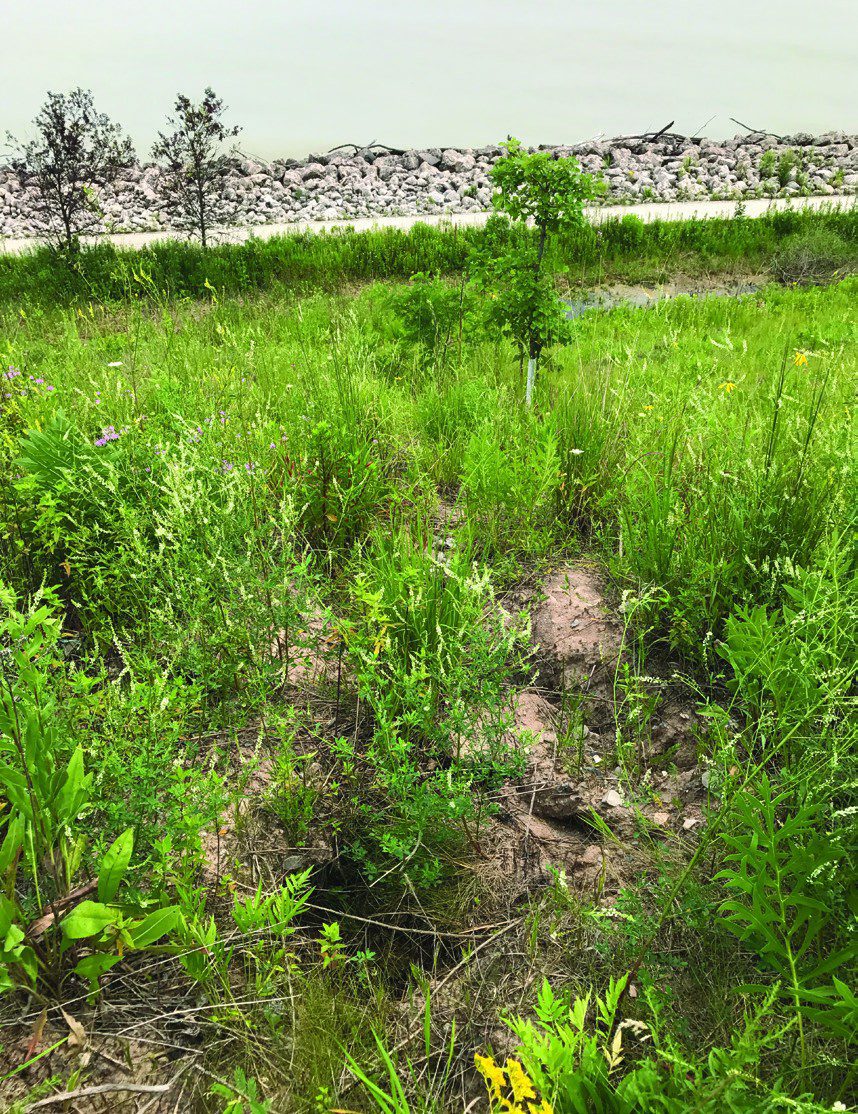 Unfortunately, eradication of invasive plants is easier said than done. Fortunately, Clay Frazer, senior ecologist with Eco-Resource Consulting of Stoughton, Wis., was up to the task. He developed a rigorous plan that involved targeted removal and monitoring in areas that had lower populations of invasive species as well as multiple herbicide applications and controlled burns over the span of three growing seasons in areas that were more-significantly affected. This intensive practice was required to ensure that the root tissue and seed bank onsite were completely eradicated.

After the invasive species were eliminated on the bluffs, Eco-Resource Consulting focused on selecting best-management practices for slope repairs, erosion control, topsoil placement/amending, and replacement of invasive plants with deep-rooted native grasses and forbs. 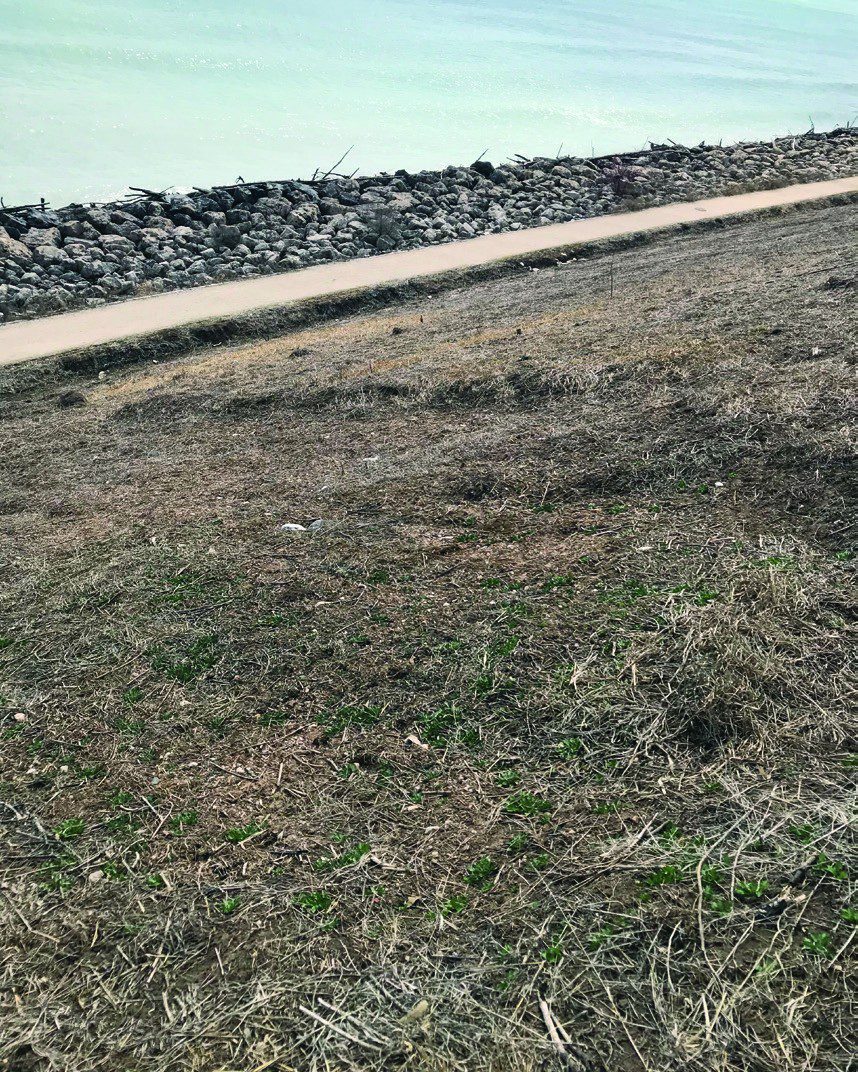 Some slope failures were barely visible when the site had a vegetative cover or when viewing from above (above). After a controlled burn, the problem areas became more apparent. Areas where sloughing occurred (below) were more visible from the top of the slope as the substrates were piled up. 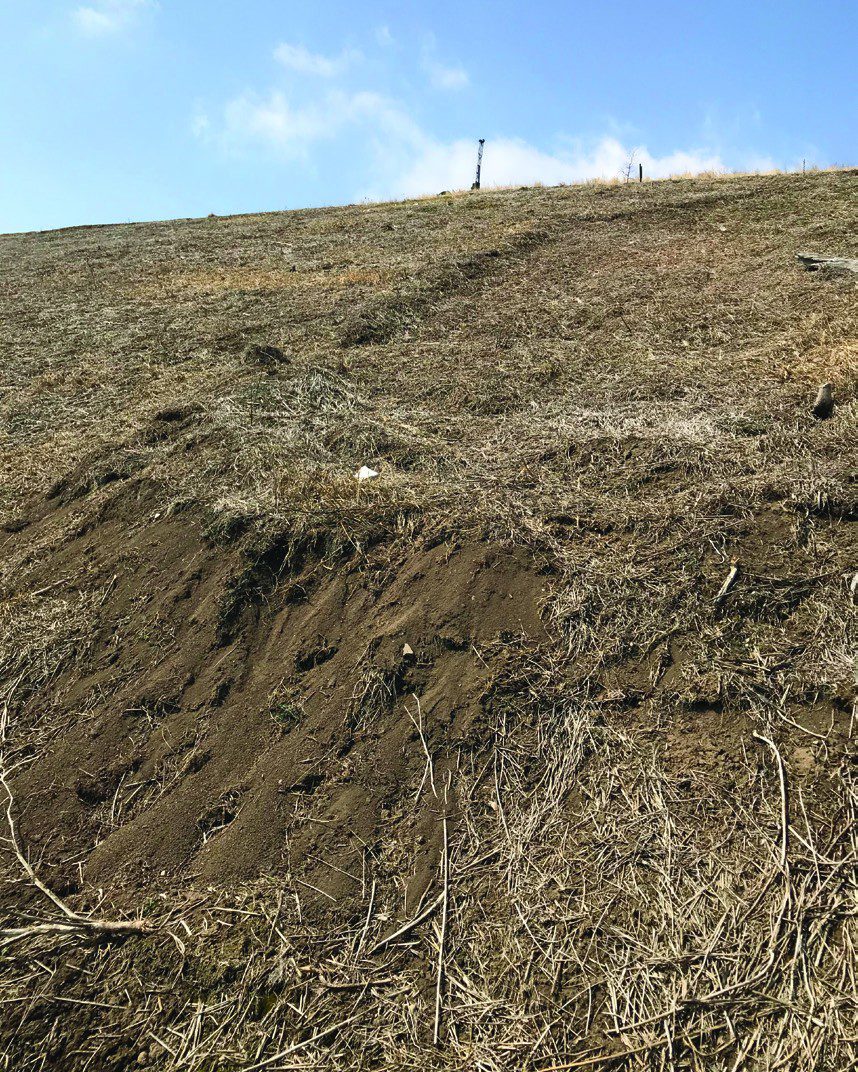 Upon initial review of the site, there were a few obvious issues caused by the installation of erosion control blankets (ECBs) in the initial application, including the following:

• Poor degradation. The blankets’ netting—polypropylene designed to be photodegradable—were still seen onsite more than eight years later. Many degraded by UV but just enough to allow sections to break off and move down the slope by wind or water. 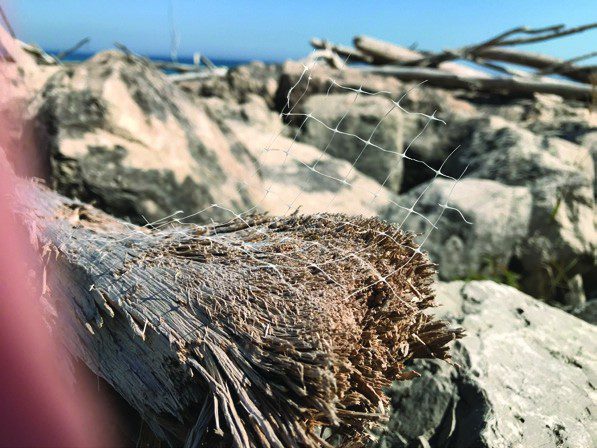 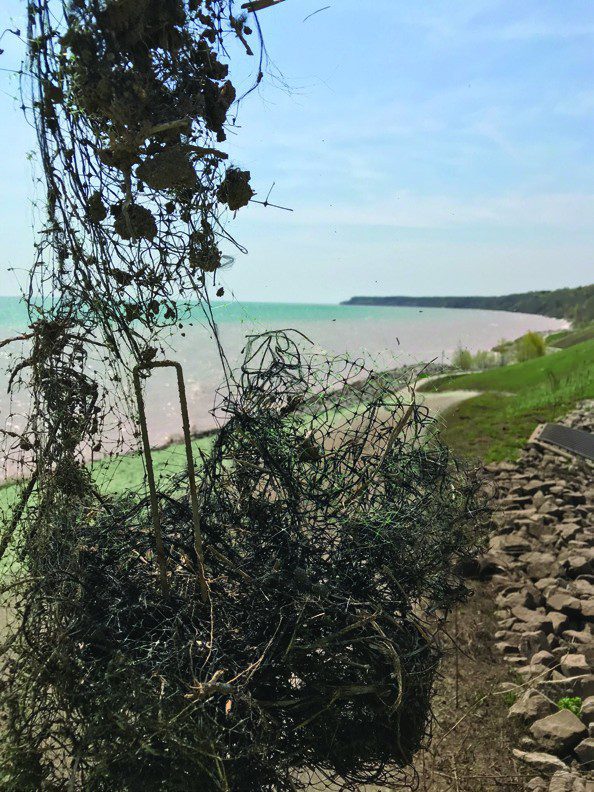 • Poor staple penetration. Many of the metal U-shaped staples used to install the blankets were still visible onsite. In some cases, the staples were protruding from the ground either due to poor initial installation or years of freeze/thaw. 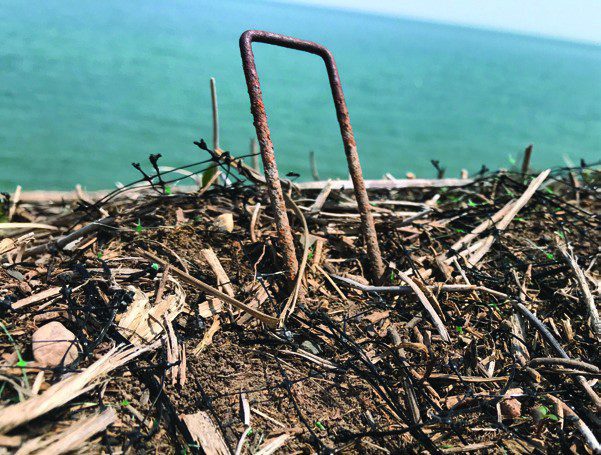 • Inconsistent seed dispersion. Topsoil, which had been stockpiled for extended periods of time, was placed on the steep slopes. The topsoil then was seeded, and ECBs were installed over the seed. As blankets were rolled down the slope and pinned by hand, much of the seed likely migrated down the slope during installation. 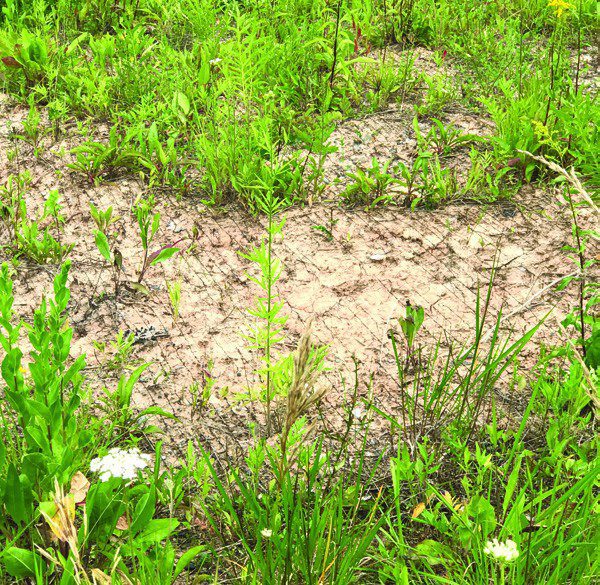 As the bluff was being redesigned for construction, plans once again called for applying topsoil across the entire site. Based on the slope gradient and length, this option was avoided, because placing topsoil on slopes of this magnitude often is a futile effort that can actually increase erosion potential onsite. In addition, there was a major concern that the application of topsoil could bring in weed seeds.

For this reason, Eco-Resource Consulting was looking for alternative solutions to placing topsoil. ProGanics Biotic Soil Media (BSM) was selected as an alternative to topsoil due to the following advantages:

• It offers high amounts of organic matter and a concentration of soil-building components with no sand, silt or clay, as these materials are readily available onsite.

• It’s engineered and manufactured under highly controlled conditions to ensure consistency in each and every bale of material provided; unlike topsoil or compost, ProGanics is free of potential weed seeds and pathogens—a major consideration for this application.

• ProGanics, seed, fertilizer and other soil amendments may be applied in one hydraulic slurry rather than multiple steps to place and spread topsoil, saving time and improving worker safety due to less exposure to jobsite hazards and traffic.

With the topsoil alternative selected, it was time to ensure that the ProGanics, seed and amendments stayed in place until vegetation established onsite. Flexterra High Performance-Flexible Growth Medium (HP-FGM) was selected for these extreme slopes. In addition, Flexterra is 100-percent biodegradable, so there’s no worry about photodegradable netting, threads or staples.

In the areas where sloughing had occurred, it was decided that Turf Reinforcement Mats (TRMs) would be necessary to ensure there was no additional slipping due to varying substrates. Futerra HP-TRM R45 was selected, as it can be used in conjunction with Percussion Driven Earth Anchors (PDEAs). By incorporating PDEAs, the HP-TRM was held in place not by pins that simply pierce the surface, but by a Frustum cone that employs resistance from the weight of the substrate between the TRM and anchor. This allowed the anchors to pass the plane of varying materials that caused the initial sloughing and utilize the substrate’s weight to create a more-stable environment.

The ProGanics BSM was hydraulically applied evenly across the site with the customized native seed mix that Frazer designed, along with an oat cover crop. After the topsoil alternative and seed were in place, Flexterra HP-FGM was hydraulically applied to protect the seed and soil from erosive forces. Flexterra HP-FGM is greater than 99-percent effective at controlling erosion and has a functional longevity of up to 18 months. Both of these parameters are important considerations for native seeding, as it’s imperative that the slow-germinating, native seed remains in place until they’re ready to establish. 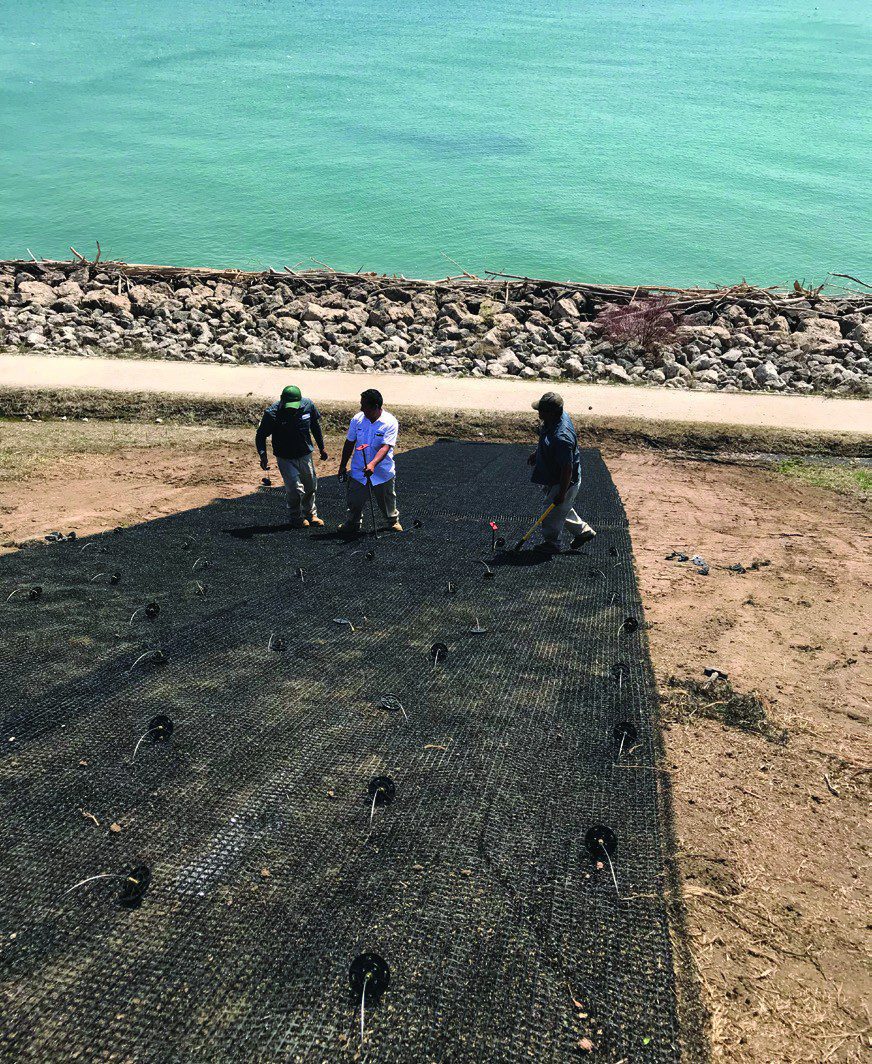 In areas where shallowslip planes and sloughing was noted, permanent, High-Performance Turf Reinforcement Mats (HP-TRMS) were installed (above) with Percussion Driven Earth Anchors (PDEAs). The hightensile-strength matting secures the soil in place, and the anchor portion of the PDEAs are installed through the slip plane (below), ensuring the securing point is below the unstable material. 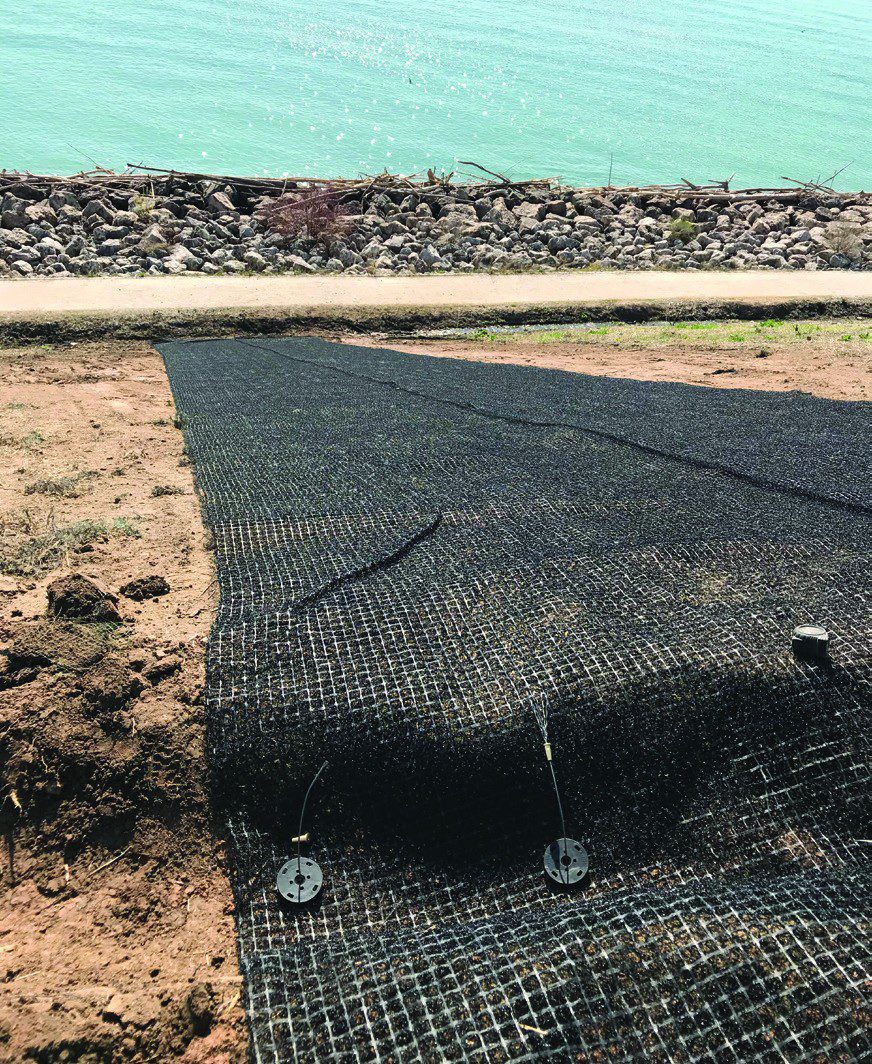 Kendall Kulig and the Kulig Contracting team was tasked with executing the plans and installing the materials. Their extensive knowledge and experience of installing hydraulically applied materials ensured the plan would be executed seamlessly.

Bluffs That Will Last

With all of the plans successfully executed and the BMPs installed, it was a “waiting game” of inspection, maintenance and monitoring. The oat cover crop established evenly across the site and was mowed to ensure the native species would get the required sunlight and soil temperatures for germination. This mowing also prevented latent (banked) annual weed seeds from seeding and further proliferating.

As designed, native vegetation began flourishing later in the season, and the site will continue to develop as a variety of species applied to the site will continue to germinate and establish in future growing seasons. Through proper monitoring and maintenance, the Lake Michigan bluffs on Concordia University’s campus will be a relished feature for both the students and the public for many years to come. 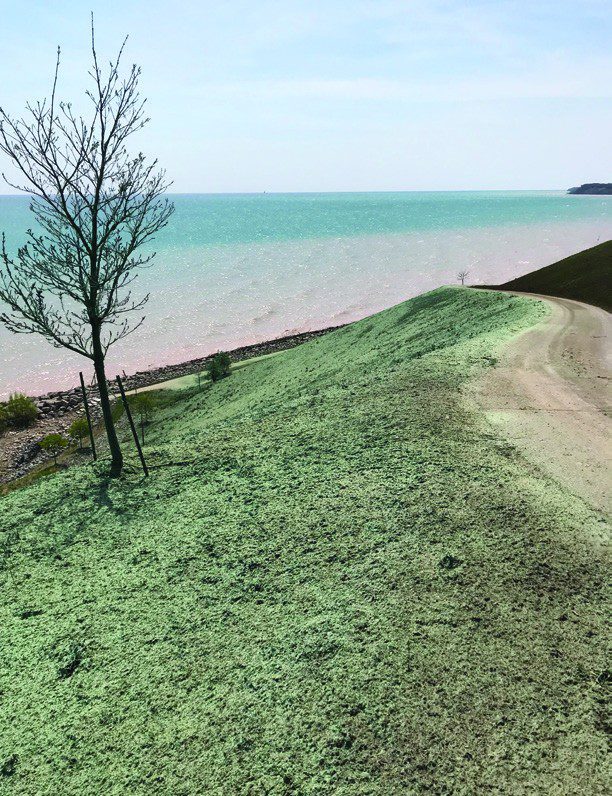 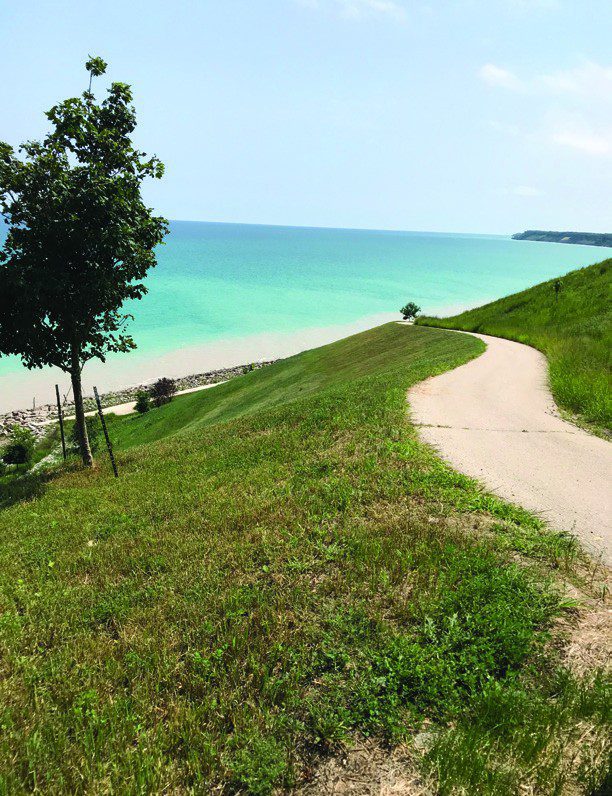 HP-FGM erosion-control material is visible shortly after application in May 2018 (top left). Full vegetation establishment was seen less than three months later (top right), and a June 2019 picture shows how the vegetation has since grown (bottom). 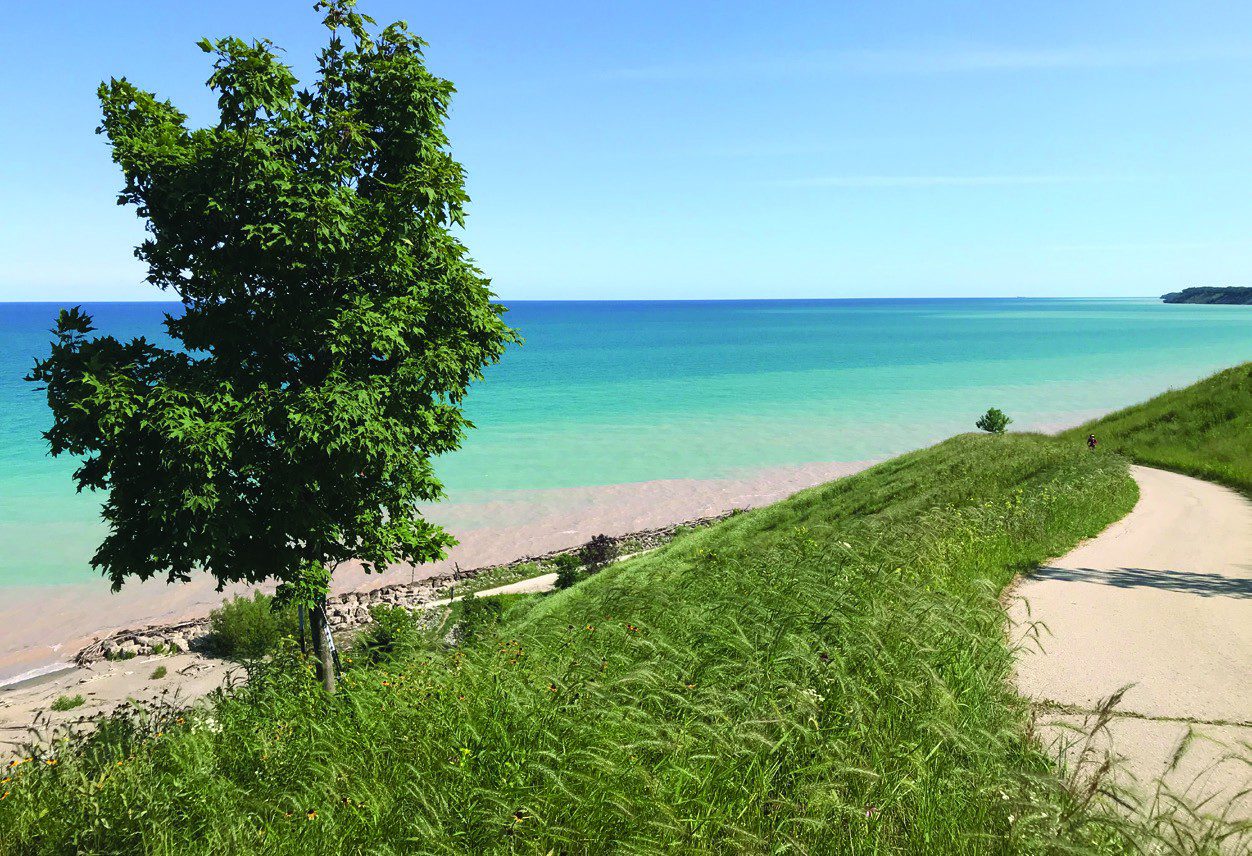