A new hospital in Maryland’s Montgomery County is part of a master plan to rejuvenate a long-neglected neighborhood.

When the Adventist HealthCare White Oak Medical Center opened in Maryland in August 2019, it became the newest addition in the development of a parcel that has arisen from the ashes of what was once one of the nation’s most important—and dangerous—military fixtures.

Since the closing of the Naval Surface Warfare Center in 1997, the former military compound has undergone an extensive and sorely needed rejuvenation. The area now homes the Food & Drug Administration (FDA), public amenities, mixed-use projects and the state’s first rapid-transit bus system. The area includes a 280-acre development called the White Oak Science Gateway, which officials in Montgomery County hope will “be a catalyst for desired revitalization and redevelopment in the White Oak sector and elsewhere in the Eastern portion of Montgomery County.”

In a master plan approved in early 2019, officials said the project “will create job opportunities throughout White Oak and the Eastern portion of Montgomery County and will expand the tax base.” The hospital is a major piece to the plan.

The 48-acre hospital campus will include a state-of-the-art facility with 180 private patient rooms. Construction costs soared to $400 million for the hospital, which will replace a facility in Takoma Park (about six miles away) built during the middle of the 20th century.

A Blast at the Base

The new hospital, the science gateway and all the other plans almost never got off the ground. An explosion on June 28, 1992, at the warfare center nearly ripped the area to smithereens.

According to Ross Sutton, a long-time real estate agent in the region, “My wife said it sounded as if someone dropped a piano on our house.” Five years after the explosion, the warfare center closed and a new plan was in place. “The Naval Surface Warfare Center was actually a very good neighbor and maintained very good relationships with Hillandale (a community that borders White Oak) and other surrounding communities, but I don’t think there are too many folks around today who were not glad to see them go,” adds Sutton.

The Naval Surface Warfare Center had a variety of names, but it opened in 1944 as the Naval Ordnance Laboratory. Critical work by the U.S. Navy occurred at the facility, including development and testing of ballistics, torpedoes, mines and other explosives. The site was mostly rural when constructed, but given its proximity to Washington, D.C., and the “Beltway,” it became increasingly more congested through time.

The center had six areas where work was performed. Area 300 included 50 or more buildings and was the site where the military conducted research on explosives. The area also included magazines, which are rooms in which explosives are kept. Magazines are designed to contain any accidental explosion and direct the force of the blast upwards. The 1992 blast occurred at Area 300. There were no reports of injuries in the blast, which Navy Lt. Cmdr. Eric Johns estimated to have the power of 3,000 pounds of TNT. One nearby resident said it “sounded like World War II was starting.”

“The blast rocked the neighborhood and sent a column of smoke 500 feet into the air,’’ notes Sutton. The entire magazine was obliterated, but it worked as intended. “Aside from a few blown-out windows at the facility, surrounding communities were not affected,’’ he says.

The military compound, which stretched across 662 acres, closed permanently five years later. In 2009, the FDA moved to the location, consolidating previously scattered labs and offices into 14 new buildings. The cost of the move reached $1.15 billion, according to The New York Times.

“The base was already much reduced in size as a result of the 1991 Base Realignment and Closures, but the blast helped the powers that be in deciding to close the base entirely,’’ adds Sutton. 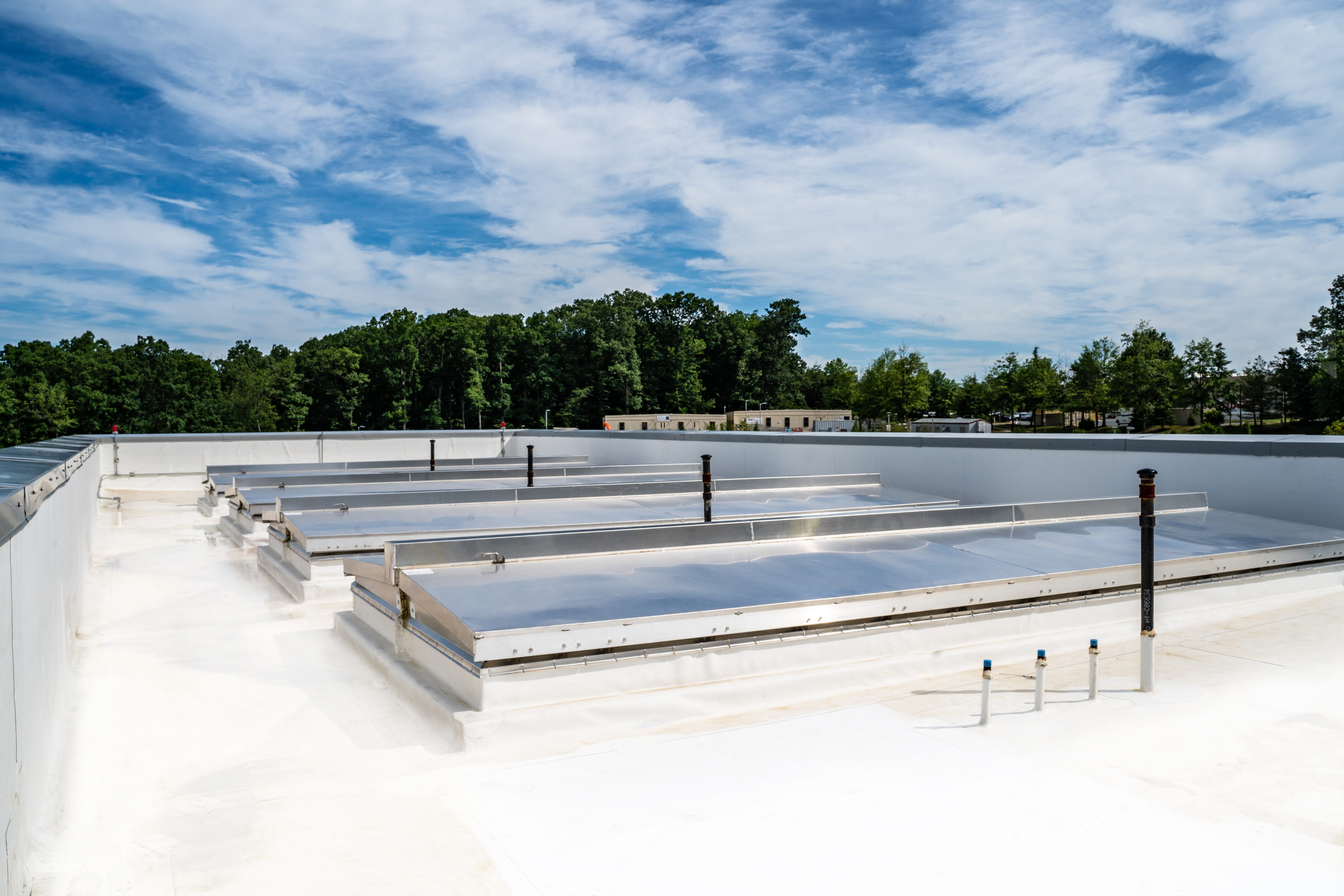 The hospital’s Takoma Park campus opened in 1907 and was Montgomery County’s first cardiac center. The hospital’s founding was the beginning of the Adventist HealthCare system, which includes home health agencies, hospitals and other health-care services. Originally known as the Washington Sanitarium, the hospital transitioned from a long-term to acute-care facility in the 1920s and added an acute-care hospital building for surgical, obstetric and emergency cases.

The new White Oak Medical Center spreads out on 472,000 square feet with up to 1,400 employees, many of them coming over from Takoma Park. It includes 28 intensive-care beds, 16 intermediate-care beds, 22 maternity beds, eight observation beds on medical surgical units, and an emergency department with 34 treatment bays and 12 additional observation beds. The campus includes 170,000 square feet for doctor offices and outpatient services.

“This allows us to replace an aging building—a structure that depending on which part of the building you’re talking about, was built between 1950 and 1980—and was suboptimal for modern healthcare,’’ notes Hospital President Erik Wangsness.

The new facility will have several unique features, including a wellness space that will “incorporate nature to create a healing environment,” according to the hospital website. There also will be a paved walking path around a lake behind the hospital as well as a roof garden and courtyards with seating, trees and plants to relax outdoors. 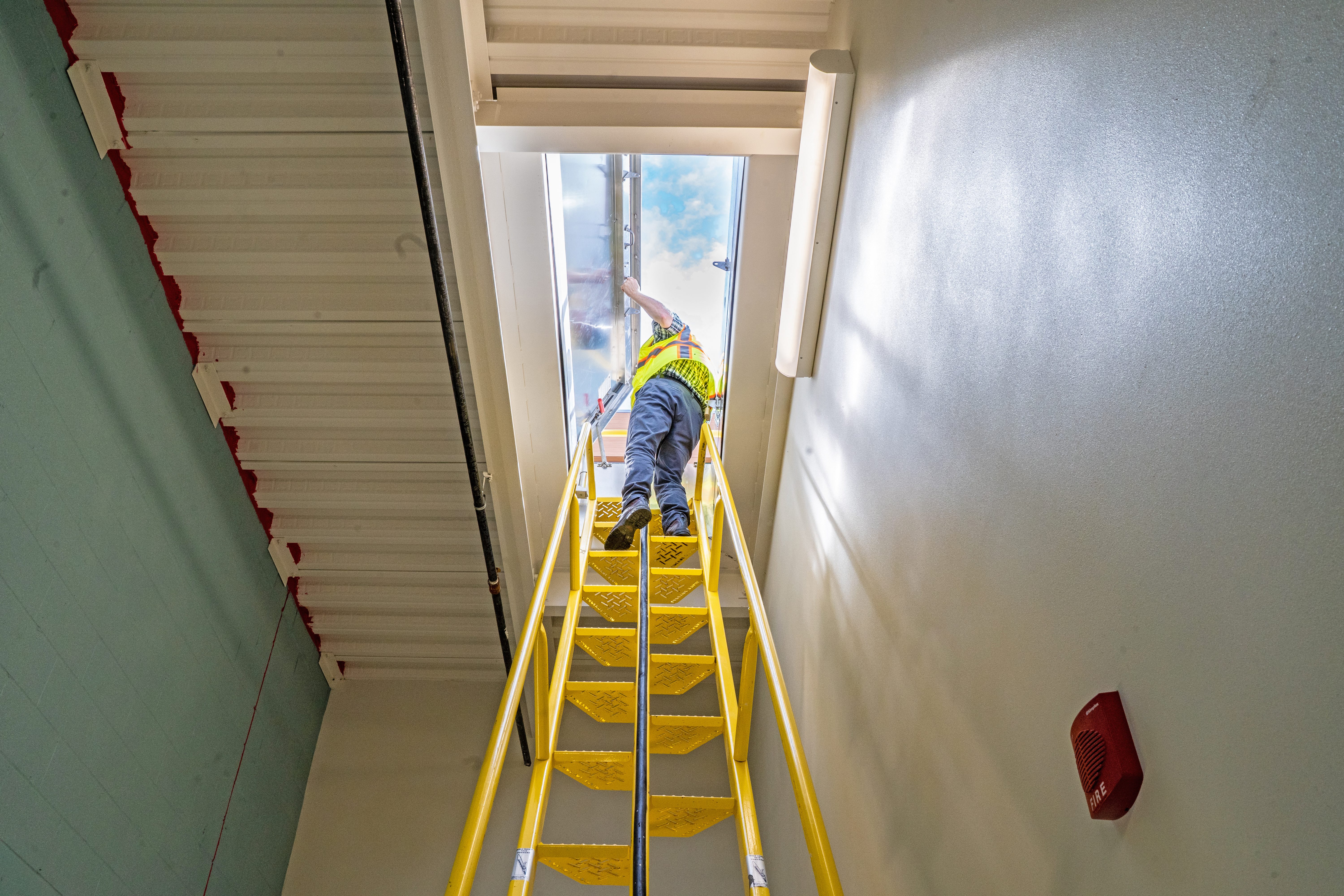 Because of the unique slope of the site, roof hatches were deemed the best access solution for removing large equipment such as generators. Image Credit – LNJ Designs Photo 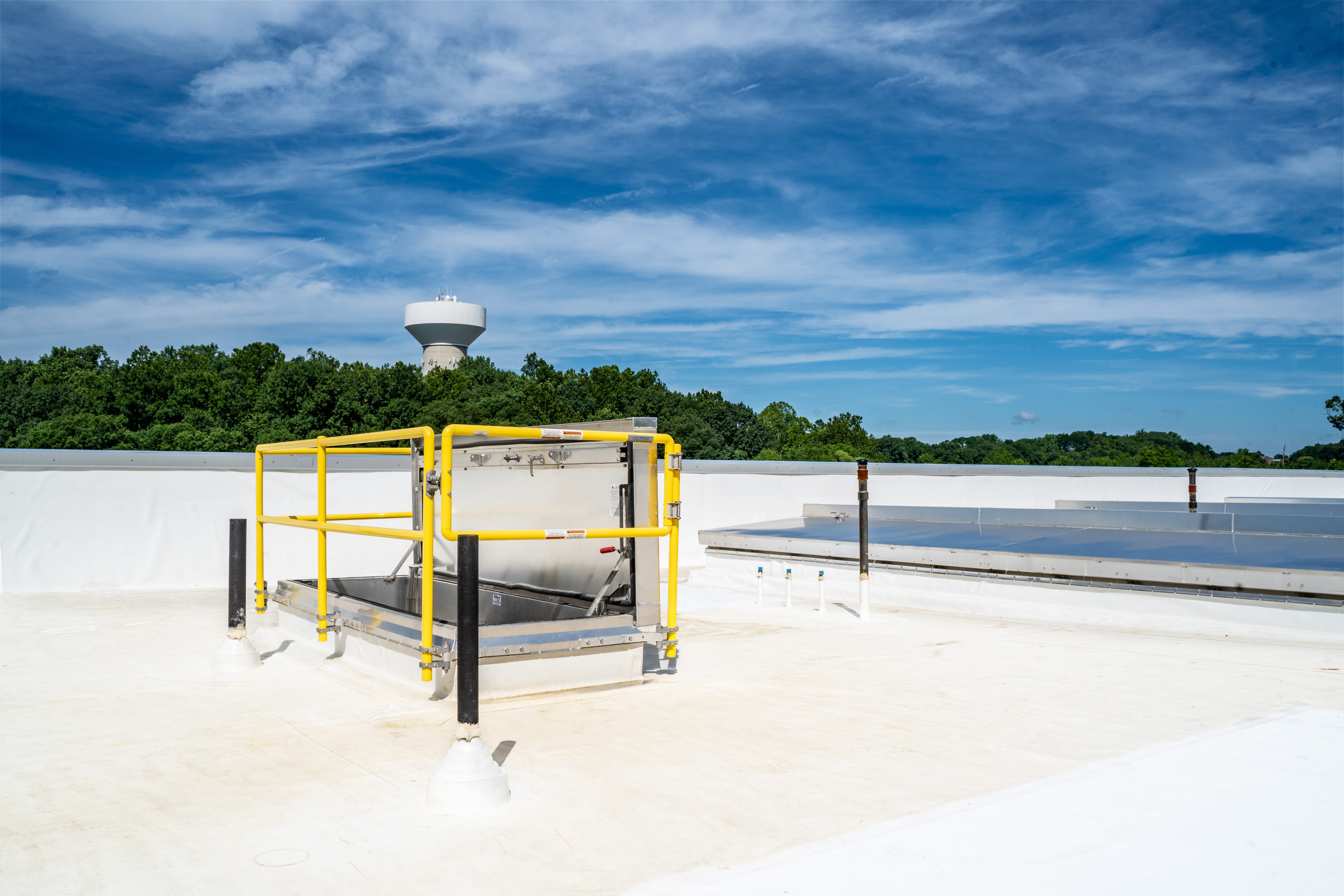 The architectural team at CallisonRTKL designed the facility, and Turner Construction served as the general contractor for the project. The large-scale hospital and shape of the land provided one of the most challenging dilemmas.

“The new campus is a long, narrow site, and designing all the medical spaces in a way that allowed easy and convenient access from the exterior proved to be a challenge,’’ says Ryan Dellinger of CallisonRTKL. “However, it also presented the opportunity for many of the interior spaces to feel more connected to the surrounding site.”

“Locating all the generators, chillers, electrical switchgear, and hot-water heaters separate from the hospital allows more future flexibility for the hospital and removes some of the more hazardous mechanical, electric and plumbing equipment from the hospital,’’ notes Dellinger. Adventist HealthCare estimated it saved between $12 million and $16 million by constructing the central utility plant.

An essential component to the plant are four specially made roof hatches manufactured by The BILCO Company. The roof hatches are 9 by 22 feet, which will allow access to the generators when they eventually need to be replaced. The hatches were installed by Cole Roofing, a  fourth-generation family business celebrating its 100th anniversary.

The scientists now working in the area are no longer focusing on lethal military materials. Anchored by the FDA, scientists are developing and testing products to improve public health. The new medical center also will partner with the FDA to collaborate on health and medical innovation.

Peter Fosselman, Master Plan Coordinator for Montgomery County, believes the hospital aligns nicely with the biosciences park and the new headquarters for the FDA. It also addresses a critical need for healthcare. “There is a need for medical services on that side of the county,’’ notes Fosselman. “There isn’t another hospital that’s really close by.”

The new hospital also provides much-needed jobs for the construction and design industry as well as for hospital staff. White Oak, which sits on Montgomery County’s east side, has seen stagnant or deteriorating socio-economic conditions for decades, and the new hospital will provide a much-needed economic and social lift.

Part of the Plan

After the Naval Surface Warfare Center closed, various plans were adopted for the White Oak site. Now, more than two decades later, all the pieces are in place for a vibrant, critical and life-altering development for the residents of the eastern side of Montgomery County. The blast that had the potential to re-shape the community in a much different fashion has long been forgotten.

The plan “represents the next big step forward in making our region a hub for innovation in bioscience that will help develop more cures and treatments for diseases that impact every American family,’’ says Maryland Senator Chris Van Hollen. He said the goal is to “make Maryland a world center for discovery, innovation, and the development of new products to improve healthcare and quality of life for all Americans.”

Thomas Renner is a former award-winning editor and journalist based in Connecticut who writes frequently on construction, manufacturing and other business trades; email: trenner@catalystmc.com.