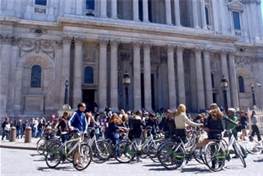 Twenty years ago, very few people could name a world-class British cyclist beyond Chris Boardman, but following last year’s Olympic exploits and Sir Bradley Wiggins’ triumph at the Tour de France, a whole generation of Brits have been inspired to embrace pedal power according to Ordnance Survey.

Research carried out by the national mapping authority and released today (Thursday 4 July 2013) shows that 93% of bike users in Great Britain own a bike, with 10% of us clocking up over ten miles on a single bike ride. 64% of us say that riding a bike is a more affordable way of getting fit than going to a gym and many of us agree that it gives us a greater sense of adventure as we are more likely to explore areas we have never been to before.

More than a third of us say that we were inspired by the Olympics to take up a new sport or take up regular exercise and television screenings of events such as the London marathon keep us encouraged and enthusiastic about getting active. And if you are looking for some inspiration to get you out on your bike, this year’s Tour de France is on television now and next year’s race is coming to Britain. Perhaps you could challenge yourself or your friends to cycle the route before the race gets started, so you know the challenges and the emotions the racers are taking.

The 2014 Grand Depart (the opening stage) will test cyclist’s endurance and fitness in a 190 kilometre race from Leeds to Harrogate, kicking off on Saturday 5 July 2014. The terrain is challenging with slopes and hills to test the most athletic amongst us. Stage two, the next day runs, from York to Sheffield and is the longest stretch at 200 km. The third British stage on Monday 7 July, runs from Cambridge and ends on The Mall in London and is expected to reach an audience of millions.

So, if you are ready for a challenge and want to take on the Tour De France ahead of the big event next year, you can by accessing the proposed routes direct from Ordnance Survey. A year ahead of the event starting, the national mapping authority has created GPX files of the first two stages, showing the detail of the proposed routes and giving you ample time to take on the challenge and get fit enough to complete the stages.

Nick Giles, General Manager for Ordnance Survey Leisure said:
“Good quality detailed maps are a vital piece of any cyclists kit. The need to understand and plan routes is essential and by using detailed mapping cyclists can easily understand the landscape which they plan to ride. A good quality map not only lets you understand terrain, road layouts and height information but it also gives the cyclist the opportunity to discover other hidden treasures and vital points of interest, from large tourist attractions to quaint country pubs.”

Simply download the GPX coordinates from the Ordnance Survey website, meaning you can have the detailed route of the first two stages available on your mobile, on your laptop or even printed out. It’s easy to download the route into OS MapFinder for your iphone or ipad so you’ve got it cached on your phone – quick and simple to check while you are out and about or import into OS getamap to plan your route and print out sections to take with you. You can even download the route into any other GPS device.

But while the Tour de France cyclists will complete a stage each day, you could take your time and use OS getamap to plan a weekend or short break around completing each stage. Using the most up-to-date 1:25 000 scale mapping, OS getamap can show you the slopes and hills that you will be tackling if you take on the challenge. It can also pinpoint hotels and local B&Bs, which can offer accommodation as well as pubs and viewpoints for a pot of lunch or a refreshment break.

NOTE: The routes are available to download from www.ordnancesurveyleisure.co.uk/cycling-challenge