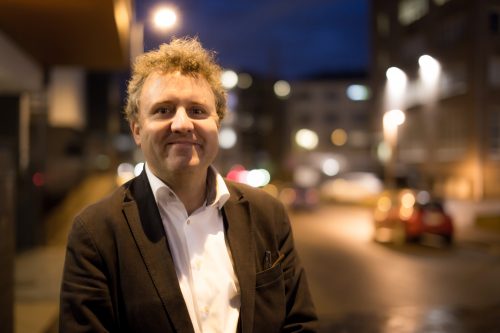 Christopher Ridgewell is the CEO at AW-Energy, a Finnish company developing the patented WaveRoller concept and product design to utilize ocean wave energy.

After working in marine technologies for nearly 30 years, Ridgewell was exposed to the potential of WaveRoller technology, and he was hooked. “Wave energy has always been the ‘Holy Grail’ of naval architects,” he adds.

Extracting from “The Surge”

The WaveRoller is a panel that’s fixed to the seabed in the water depth between 10 to 15 meters. It’s placed anywhere between 400 meters and a kilometer offshore, and it extracts energy from the wave-surge phenomenon.

“Deep at sea, the wind blows on the waves, and you get this circular motion underwater,” notes Ridgewell. “You see the wave, say seven meters high, but what people often don’t appreciate is that the wave extends deep underwater–it can extend deeper than 200 meters.”

As this circular energy approaches the shoreline, shoaling takes place, and the wave period decreases; the space between the waves decreases, and the wave speeds up.

“Our panel sways backwards and forwards with this surge phenomenon,” explains Ridgewell. “And it’s a very efficient form of extracting energy.”

The WaveRoller turns the elliptical wave surge into linear motion through hydraulics. In wave energy, the torque forces are very high, but the speed is very low. This is the opposite of a car engine.

“Every 15 seconds, we have this big pulse of power coming in,” he adds. “We utilize some smoothing, and we can optimize the counter torque on the panel to get optimal energy out from the wave.”

Electrical generators rotate through the hydraulics, and this rotation is continuous so it’s constantly delivering power to the grid in a smooth fashion. A shore connection cable goes out to a land substation with all the critical electrical components.

The company recently received a manufacturing certification from Lloyd’s Register, which is vital to the technology’s success, but perhaps not in the way expected.

“One of the key cost drivers in any renewable project is the cost to finance,” explains Ridgewell. “The higher the risk, the higher the financing costs. To reduce the cost, insurers would like to have a third party check to make sure the technology is reliable: it’s not going to fall apart on the seabed, it’s not going to cause a pollution hazard, these sorts of things.”

It took several years to set up the initial technology for approval in Portugal, including deploying the WaveRoller devices, attaching strain gauges and validating the numerical model. Another step included developing a full-scale test facility in Finland to test reliability and automation. Lloyd’s Register qualified the technology in 2017, at which point the company began its manufacturing phase.

“A major advantage is being discussed in California, which has an objective to go to 100 percent renewable energy,” notes Ridgewell.

The big challenge in California is that it’s windy and sunny in the summertime; but there’s a big dropoff during winter, so traditional renewable sources such as solar and wind become problematic. Battery storage for an entire season would require massive amounts of rare materials and lithium. Wave energy could help fill that seasonal gap, as it’s energy supply peaks during the winter.

Wave energy also is more predictable than wind and solar, with effective forecasts of about a week in the major oceans, as opposed to days or hours for wind and solar. The technology’s main drawback is being a newcomer to the renewable energy market.

“The costs of wave energy now are high compared to wind and solar,” admits Ridgewell, “but it’s the same as with wind and solar when they were early technologies. The challenge is to overcome this hurdle and move to larger projects to really get the costs down; and the costs will come down.”

Another concern is location. WaveRollers obviously require coastlines, and the types of coastline also factors in the technology’s effectiveness.

“The technology’s suited for large oceans, so it’s not very good here in the Gulf of Finland: the sea is far too small, the wave period is not long enough,” he adds. “We need a large ocean where the wave period picks up, and the entire water column is activated.”

Ridgewell’s experiences in renewable wave energy led to some insights he believes are universal to tackling any energy project.

“We need to think about the entire energy system and how to produce continuous supply to the customers,” he states.

He believes it’s important to keep everything moving along at the same speed, all the way through the project lifecycle from assembly and deployment to power take off operation and grid connection to decommissioning, and think of it as an entire system. Engineers also need to think in terms of the customer.