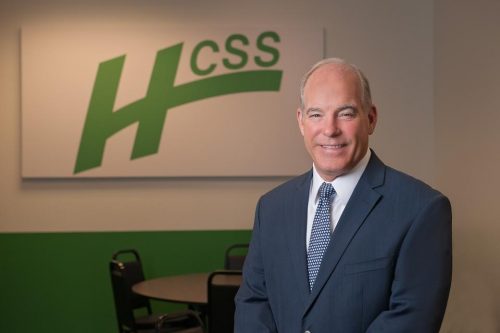 A 35-year construction industry veteran, McGough joined HCSS in 2005 as chief operating officer. He added president to his title in January 2015 and chief financial officer two years later. He began his career with Turner Collie and Braden, a consulting engineering firm in Houston that is now part of AECOM.

HCSS specializes in developing software to help heavy, highway and utility construction industry companies streamline their business operations, bid for new business, maintain construction equipment and manage projects. The firm collaborates with more than 4,000 of the best construction companies in North America, including most of the top 25 in “Engineering News Record” magazine’s “Top Heavy Civil Contractors.”

McGough’s leadership roles extend to other groups. He currently serves on the board of directors and executive committee for The Road Information Program (TRIP), a national transportation research group.

McGough outlined his chairman’s goals for this tenure during a presentation at the ARTBA convention.  Among them: a permanent, sustainable fix for the federal Highway Trust Fund, which is the source, on average, of more than 50 percent of highway and bridge capital improvements made by the states annually.  He said ARTBA will continue to frame the debate on Capitol Hill for passage of robust transportation infrastructure package. He noted the association has been sharing its 32-page legislative blueprint for the reauthorization of the nation’s highway and transit programs with members of the House and Senate.

The new ARTBA chairman emphasized his commitment to building increased industry awareness and participation in the American National Standards Institute-accredited the Safety Certification for Transportation Project ProfessionalsTM program. The certification, launched in fall 2016, aims to dramatically reduce the number of injuries and fatalities in and around U.S. transportation infrastructure worksites. More than 400 transportation construction professionals have earned the safety credential.

Finally, McGough announced the launch of a member-driven strategic planning exercise to develop an association business plan for the next three to five years.

McGough earned his bachelor’s in civil construction from Texas A&M University and his M.B.A. from Tulane University.

He and his wife, Elaine, live in Kemah, Texas, on Galveston Bay.  They have two adult sons, Ryan and Grant.