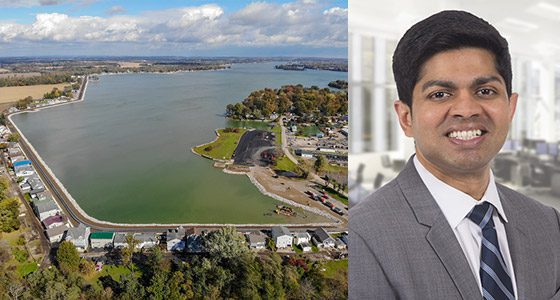 The National Rehabilitation Project of the Year Award recognizes a corrective design that furthers the innovation and advancement of dam safety standards. Buckeye Lake Dam in central Ohio, a key water supply for the Ohio and Erie Canals in the 1830s, is now a crucial tourism destination called Buckeye Lake State Park. The Army Corps of Engineers issued a warning in 2015: the dam was in danger of “catastrophic failure,” endangering approximately 3,000 citizens and more than 2,100 homes and businesses. As the lead designer, Gannett Fleming pioneered a revolutionary remediation solution not previously used on a U.S. dam and shortened the project timeline by nearly two years, reestablishing vital water infrastructure and providing security for the local economy and residents.

Committed to improving dam safety, Israel-Devadason received the Young Professional of the Year Award for his dedication to creating innovative hydraulic and hydrologic models while sharing his knowledge through technical papers, conference presentations, and webinars. Israel-Devadason is an active member of the ASDSO Public Safety Around Dams Committee, and trainers use videos of his models to educate first responders on the consequences of dam breaches. Additionally, he volunteers with middle school students and challenges them to come up with innovative ideas to solve dam safety issues. He is currently working on establishing a website indexing U.S. low-head dams.

Emmett received the Memorial Undergraduate Scholarship for her drive in pursuing a career related to dam design, which she focuses on currently as an intern at Gannett Fleming. A senior at Penn State Harrisburg, she serves as the environmental chair for the university’s American Society of Civil Engineers student chapter and plans to pursue a master’s degree upon graduation.