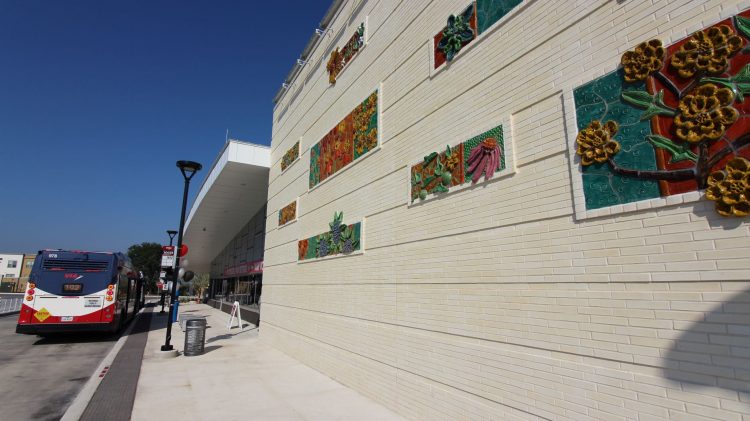 St. Louis, MO – The City of San Antonio, Texas celebrated the much-anticipated opening of the VIA Metropolitan Transit’s Brooks City Base Transit Center on Sept. 14. Located near the corner of South New Braunfels Avenue and Sidney Brooks North Road, the state-of-the-art Smart Transit Hub designed by KAI celebrates the historic Brooks Air Force Base once located on the site.

The facility’s design takes cues from World War I biplanes with its curved roof and columnar support system. The Brooks Air Force Base once located on the site was one of the first training facilities for the US Army Air Corps, dating back to December 1917.

This project opened the door for VIA Metropolitan Transit to implement a bus-based corridor project along Zarzamora Street. As part of this project, two types of shelters were included: Primo shelters at 26 locations and NextGen shelters at 20 locations along the corridor.

KAI Enterprises is a national design and build firm providing delivery-oriented building solutions with a diverse portfolio of experience, in-house multi-discipline professionals, and expertise in both design and construction delivery. Founded in 1980, KAI has grown into one of the largest minority-owned firms in the AEC industry. For nearly 40 years, KAI has been instrumental in transforming communities through its expertise in residential, commercial, K-12, higher education, healthcare, science and technology, aviation, mobility, sports and entertainment, government, water and community-focused projects. KAI Enterprises is comprised of four distinct business units—KAI Design, KAI Engineering, KAI Build and KAI 360 Construction Services. To learn more about KAI, visit www.kai-db.com