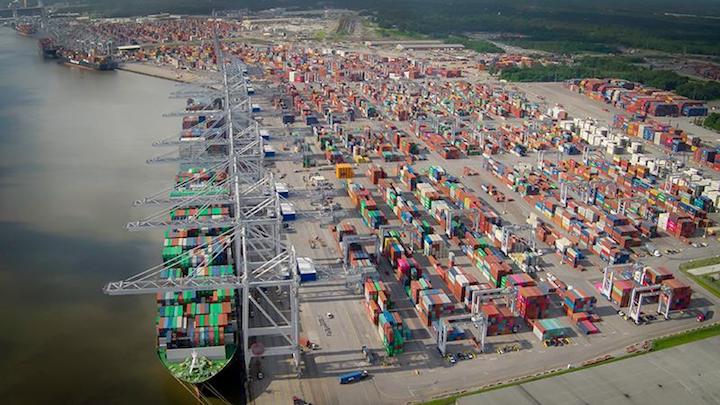 SAVANNAH, Ga. – Port-related announcements of expansions and new business accounted for nearly $5 billion in investment and 12,000 jobs across the state of Georgia in Fiscal Year 2019, a year in which the Port of Savannah moved a record 4.5 million twenty-foot equivalent container units.

“The manufacturing and logistics sectors are key components of our economy, and I am excited for the opportunities created for hardworking Georgians,” said Gov. Brian Kemp. “Georgia provides the workforce, infrastructure and collaborative business environment that industry leaders need to thrive, and we look forward to supporting their long-term success in the Peach State.”

In the fiscal year that ended in June, the Georgia Ports Authority achieved record volumes in containers, total tonnage and cargo moved by rail. At 4.5 million TEUs, the Port of Savannah grew its containerized trade by 7.3 percent, or 305,000 TEUs. Total tonnage reached 37.5 million, up 1.5 million tons or 4.2 percent. The port handled 507,000 intermodal boxes, up 73,000, or 17 percent compared to the previous year.

“The market has clearly chosen the Port of Savannah as the Southeastern hub for containerized trade,” said GPAExecutive Director Griff Lynch. “To fulfill the growing responsibility placed on our deepwater terminals, we have developed a plan to double our capacity.”

“What has set Savannah above the competition is our ability to scale up in advance of market needs, so that we are ready when our customers are ready to grow,” said GPA Board Chairman Will McKnight. “Our terminal infrastructure plan adheres to our investment philosophy of always keeping infrastructure ahead of current demand. This will ensure the GPA is prepared to handle the next wave of cargo expansion.”

Speaking to an audience of nearly 1,400 at the Savannah State of the Port, Lynch announced expansions that will bring the Port of Savannah’s annual capacity to 11 million TEUs, up from the current capacity of 5.5 million TEUs per year. The Authority plans to expand beyond its 1,200-acre footprint at Garden City Terminal to establish a new container port on Hutchinson Island, across the Savannah River channel. The 200-acre Georgia site sits directly across from Ocean Terminal in Savannah. It will have an annual capacity of 2.5 million TEUs.

Lynch said the influx of cargo crossing Savannah’s docks is also driving an extraordinary level of development from private investors. In FY2019, developers added 10.75 million square feet of industrial space in the Savannah market for a total of 67.7 million square feet, an increase of 19 percent.

“Savannah is an incredibly hot market right now,” Lynch said. “Business has been flowing into this area in such volume that with all that construction, our vacancy rate dropped to 1.5 percent. Savannah has achieved the highest absorption rate in the nation.”

To handle the growing container trade crossing Garden City Terminal and to attract additional business, the GPA is expanding its rail infrastructure and offerings. At Thursday’s event, Lynch introduced dual rail service from the Port of Savannah to Chicago, with cargo reaching the Windy City in less than three days.

“Our expanding offerings with Norfolk Southern and CSX to the Midwest will be a game changer in the growth of cargo at the Port of Savannah,” Lynch said. “We’re now moving containers from ship to departing rail in only 24 hours – two and a half times faster than our previous schedule – which makes Savannah competitive on time and lower on cost compared to traditional cargo routings.”

McKnight said to accommodate increasing rail demand, the Authority is in the midst of a $220 million expansion of its on-terminal rail infrastructure at the Port of Savannah.

“The Mason Mega Rail Terminal will be the largest on-dock rail facility at any port in North America,” McKnight said. “It will allow the Authority to shift more of its cargo mix from truck to rail, so that we can grow our overall volumes without congestion at our truck gates.”

Construction on Phase I of GPA’s Mason Mega Rail Terminal will be complete in the spring, with a grand opening slated for March 2020. When Phase II opens in late 2020, the project will double the Port of Savannah’s rail lift capacity to 1 million containers per year.

The Savannah State of the Port event is co-hosted by the Propeller Club of Savannah.

“The success of the Georgia Ports Authority has a tremendous ripple effect across our community and our state,” said Propeller Club President Trey Thompson. “The Authority’s proactive stance on infrastructure and new business development means economic security for thousands of Georgians within maritime logistics and beyond.”