/ Corporate / Building a Smarter Honolulu with Transparency and Citizen Involvement

Building a Smarter Honolulu with Transparency and Citizen Involvement 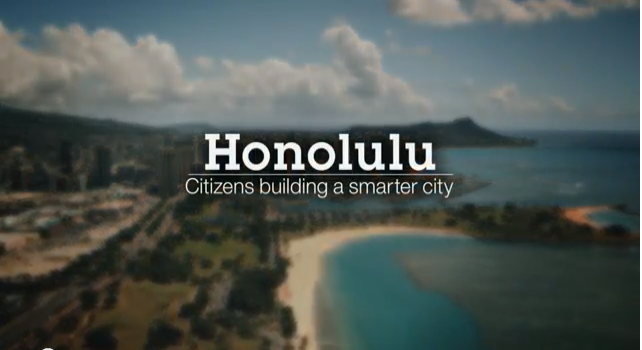 A city that evokes the image of a high-rise skyline in the middle of paradise, Honolulu, Hawaii has recently been undergoing a technological transformation. In November 2011, the Center for Digital Government recognized Honolulu as the top digital city in the US in the large-city category. This recognition is impressive, considering that in November 2004, the city evaluated its IT and network systems as being underfunded and out of date.

Thanks to a dedicated effort led by a new administration and by the director and CIO of Honolulu’s Department of Information Technology, Gordon Bruce, a major transformation of the city’s IT systems took place over the next few years. Even with investments much lower than many other cities, the City and County of Honolulu deployed, upgraded and streamlined many of its systems to better serve both its employees and citizens.

Connecting people to data
Although Honolulu had successfully overhauled its infrastructure, this was only the starting point for another major project. When the city underwent a change in political leadership, the new mayor, Peter Carlisle, shifted focus toward improving government transparency. Gordon Bruce took note of the mayor’s goal: “The mayor was behind transparency from the beginning. He wanted to make real data available to citizens—data they could actually use.”

In addition, the city wanted to increase citizen participation in government and improve efficiency, but achieving each of these goals would require new approaches to take full advantage of Honolulu’s new IT systems.

Improving transparency through optimized systems
To begin its new transparency project, the city needed to open up its previously closed information to citizens. To approach this issue, the city turned to the expertise of IBM Business Partner, Sirius Computer Solutions. Moving forward with a new plan, the city deployed an IFL engine running Linux on the city’s IBM System z10® Enterprise Class (z10™ EC) mainframe. This enabled the city to migrate applications and database instances from its servers to the mainframe system, which helped reduce application deployment time from a week to only hours. In addition, when upgrading one of the facilities applications, the city was able to reduce database licensing costs from USD$250,000 to USD$80,000 by moving the application database to System z running Linux.

As a result of the city’s new IBM deployment, information from its financial systems became available to the general public for the first time—provided in real time in a downloadable format. This enabled new citizen insights into the city’s priorities and expenditures through historical financial and budget data. According to Bruce, “Citizens can do their own comparisons of budget data from year to year, line by line if they want to.” This enabled citizens—including the media—to see what was really happening within the city.

Increasing citizen involvement with a customized cloud
Another goal made possible by the city’s new IBM deployment was an increase in citizen involvement. Using Linux and IBM z/VM® operating systems on the z10 EC system, the city created a customized cloud environment. This provided a scalable self-service platform on which city employees could develop open source applications, and it empowered the general public to create and deploy citizen-centric applications.

One of the more innovative applications supporting citizen involvement is CitySourced Honolulu 311, an application created by IBM Business Partner CitySourced that enables citizens to photograph and pinpoint the location of problems—such as broken street or traffic lights or abandoned cars—and report them to the city.

Providing an IT solution to support custom applications like these introduced a new level of citizen involvement for Honolulu. The city also learned a valuable lesson and a benefit to using its cloud environment. Instead of relying on city employees to create applications, which often required excessive time and effort to complete, the city could put unfinished applications into the cloud and enable citizens to help with development. “Our whole intent has been to give citizens the opportunity to produce more, rather than waiting for us,” says Bruce.

Making better use of data with asset management
In order to support applications such as CitySourced Honolulu 311 and improve the city’s work order system, the city deployed Maximo Asset Management software. According to Bruce, “The top complaint in Hawaii is broken streetlights. Now citizens can take a photo of the pole and the pole’s number and send it to the government, which uses a geographical information system (GIS) to pinpoint the location. The Maximo system then consolidates the repair information and a work order is created.”

The city also found another useful application for Maximo: using it to support a new real estate property tax appraisal system. This system enables city appraisers to evaluate Honolulu properties and leverages the city’s GIS system powered by Esri ArcGIS, a mapping and analysis technology from IBM Business Partner Esri. Using the updated appraisal information, the city increased property tax revenue by USD$1.4 million in the first three months—without having to send any appraisers into the streets.

Integrating efficiency into city systems
Working with IBM, the city of Honolulu has been able to weave efficiency throughout its IT systems. Using an XIV Storage System, the city consolidated multiple workloads onto its virtualized infrastructure, thereby avoiding costs from additional servers as it expands services, enabling cloud implementations.

Continuing to ride the wave with IBM
As the government of Honolulu continues to grow, it hopes to build upon its initial successes in the areas of transparency, citizen involvement, service and efficiency. In the future, the city is looking to leverage the preventative maintenance capabilities of Maximo and to use analytics to further streamline its workload system. Bruce is also interested in upgrading the city’s z10 EC system to an IBM zEnterprise® System to take advantage of its advanced mainframe capabilities.

Although Honolulu has been honored as a top digital city in the US, the city plans to stay on top of IT innovation with the help of IBM. As reaffirmed by Bruce, “Working with IBM enabled us to take an innovative approach. Instead of following the long processes of other governments or even the private sector, we were able to get things up and running quickly.” Carrying on this approach, Honolulu plans to continually improve upon its efficiency for delivering information and services to its citizens.

Smarter Computing: The IT infrastructure of a Smarter Planet
Taking advantage of its z10 EC mainframe system and deploying an IFL engine running Linux, Honolulu was able to provide useful data to its citizens in real time. The city also leveraged this new platform to create a custom cloud environment for its employees and citizens. With Maximo Asset Management software, the city deployed a new work order system that combined citizen-provided data and data from the city’s geographic information system to schedule repairs.

Delivering new services with numerous benefits to the community, Honolulu’s solution helped the city to provide previously closed information to its citizens. This provided more transparency and helped to improve citizen participation in government. With its new cloud environment, Honolulu empowered the general public to create citizen-centric applications with access to years’ worth of city data. The city’s new work order system also employed citizens to report problems and improved the city’s efficiency for performing repairs. These innovative measures enabled the community to take full advantage of Honolulu’s IT systems and the city’s data.

For more information
To learn more about Smarter Computing from IBM and how we can help you integrate, automate, protect and transform your IT, contact your IBM representative or IBM Business Partner, or visit: ibm.com/smartercomputing