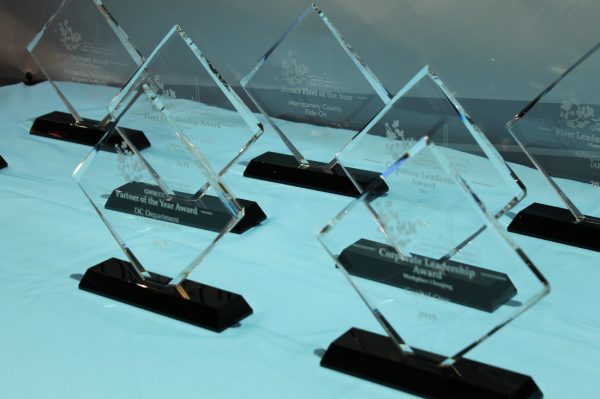 WASHINGTON – The Greater Washington Region Clean Cities Coalition (GWRCCC) today announces the winners of its 2019 Clean Transportation Awards. In its annual report to the US Department of Energy, GWRCCC reported  a 2018 reduction of petroleum use in the DMV of more than 11 million gallons, resulting in greenhouse gas  emission reductions of more than 54,000 tons. Organizations and individuals responsible for this success, along with other outstanding examples of clean transportation stewardship are this year’s award recipients.

Individuals, government agencies and private companies honored for their accomplishments during the past year include:

GWRCCCC is a 501 (c) 3 non-profit public-private partnership in the greater Washington region, promoting the use of clean, American transportation fuels for homeland security and improved air quality. GWRCCC celebrated its 25th anniversary in 2018, one of approximately 90 Clean Cities coalitions around the countries that receives support from the US Department of Energy. Since its inception in 1993, Clean Cities and its stakeholders have displaced more than 2 billion gallons of petroleum.

GWRCCC stakeholders include government jurisdictions, the Council of Governments and regional planning authorities, trade associations, private companies and concerned citizens. All have a common interest to encourage the expanded use of new automotive technology to replace gasoline and diesel fuel for a cleaner transportation future.