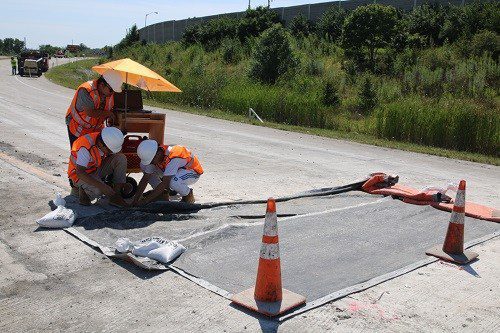 As reported by the AASHTO Journal: https://aashtojournal.org on September 10, 2019 - in News, Roads, Transportation

A team of Purdue University engineers is using roadway sensors to compile data on “concrete maturity” during select highway patching and paving projects – a project that seeks to establish “evidence-based recommendations” on the optimal time to re-open highways to traffic once construction activity is completed.

[Above Photo by Erin Easterling for Purdue University.]

The Indiana Department of Transportation is overseeing this project, which so far has embedded sensors into three state highways: I-70, I-74 and I-465 near Indianapolis.

The Purdue team also is working with the Federal Highway Administration on a nationwide pooled fund study to implement similar sensor technology in the roadways of other states, including California, Texas, Kansas and Missouri.

The Purdue team – led by Luna Lu, an associate professor at the university’s Lyles School of Civil Engineering – is collecting what it calls “concrete strength data” in real time through measurements of hydration, stiffness, compressive strength and other material properties.

That data, the Indiana DOT noted, will allow it to determine far more accurate traffic re-opening times once highway construction work is completed – which not only could save millions of dollars each year, but significantly reduce traffic delays.

“Concrete pavement patching has to achieve a certain strength level to accommodate truck traffic due to the load and pavement curling and warping,” noted Tommy Nantung, the agency’s research and development planning and production manager, in a statement.

“Through these sensors, a contractor will know exactly when the concrete is mature enough to accommodate heavy truck loads,” he said.

The sensors are protected from corrosion and not easily crushed by construction equipment, Lu added, and the array also allows data to be collected for years after the concrete is laid down.

“Being able to track concrete strength over a longer period of time would help engineers to know if they’ve over- or under-designed roads and better determine when to replace the concrete,” Lu added.