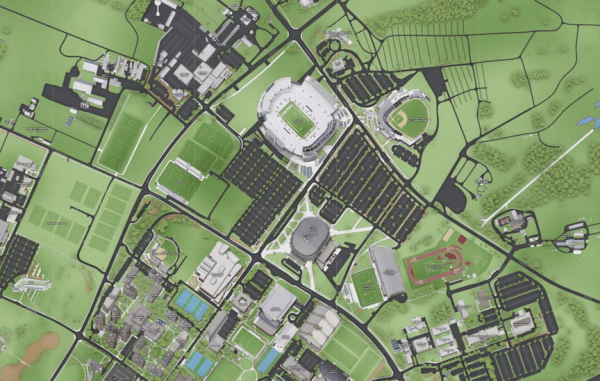 Parul Dubey on September 4, 2019 - in Buildings, News, Technology
Concept3D, a leader in creating immersive online experiences with 3D modeling, virtual reality (VR), interactive maps and virtual tour software, today announced that Penn State’s University Park and 21 of the Commonwealth Campuses have launched on the Concept3D interactive map and virtual tour platform. The number of campuses and acreage makes Penn State the largest university system to launch on the Concept3D platform.

Penn State’s main University Park campus spans nearly 8,000 acres, all of which is mapped out in realistic 3D detail on the interactive map. On desktop or mobile device, online visitors can easily toggle map categories on and off, highlighting desired information from parking to locating athletics buildings, transportation, dining, ADA accessible routes and entrances, construction, recreation and new student orientation, among other resources. Map users can also dive right into campus by selecting the 360-degree panoramic images – including one at the center of Beaver Stadium on a packed night – providing an immersive experience like no other.

Concept3D’s platform allows for multiple levels of administrative access, giving any department – from admission to athletics and facilities – the ability to create their own unique presence and profile and share the information their audiences need.

The interactive map project is co-sponsored by Penn State’s Offices of the Vice President for Information Technology and Vice President for Strategic Communications, and is led by a University-wide team of representatives from various academic and administrative units.

Penn State’s Concept3D platform includes several unique features, including real-time data feeds, the availability of computers for the majority of computer labs across the system and University Park has live transit feeds, the “Get This View” function, which gives any map visitor the ability to grab and share a specific point or area of the interactive map, and point-to-point wayfinding which provides address-entry and drag-and-drop points for easy campus navigation. Using the map’s geospatial capabilities, Penn State has also built one virtual campus tour, a 360° Tour and two Map Tours: a general campus tour and a tour from their famous Nittany Lion Inn.

“Penn State’s launch really demonstrates the power, flexibility and utility of the Concept3D platform. It shows how the technology can bring any physical space – large or small – online in an intuitive and attractive presentation that’s both useful and fun to explore,” said Gordon Boyes, Concept3D CEO. “We’re extremely proud to welcome Penn State to the Concept3D family, and are confident that the platform will help create new interest from prospective students while serving the current student body along with parents, staff, alumni and visitors.”