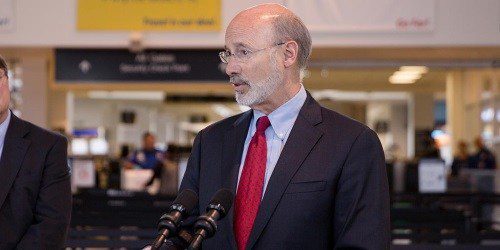 As reported by the AASHTO Journal: https://aashtojournal.org on September 3, 2019 - in Financial, News

Governor Tom Wolf (D) (seen above) gave the go-ahead on August 28 for $13.7 million worth of grants to fund infrastructure and equipment upgrades at 29 Pennsylvania airports.

“Investments in our aviation infrastructure is vital to the economic vitality of the commonwealth,” the governor said in a statement. “Hundreds of thousands of jobs are supported by aviation in Pennsylvania and the new investments announced today will help airports bolster commerce and attract more customers.”

The governor’s office said that, as of April, Pennsylvania ranks 13th in the country in terms operating the most public-use aviation facilities, with 127 airports, heliports, and seaplane bases managed by the state.

This follows $6 million in investments made by PennDOT last year at 26 state airports.