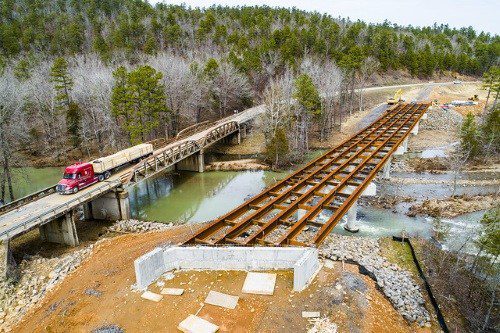 As reported by the AASHTO Journal: https://aashtojournal.org on September 3, 2019 - in Financial, News

State departments of transportation will be divvying up more than $3.9 billion in federal highway program funds after receiving authority from the Federal Highway Administration on Aug. 30 to obligate unused fiscal year 2019 money to various infrastructure projects.

[Above photo by the Arkansas DOT.]

The funding is from what the FHWA calls its “August redistribution,” which is an annual budgeting practice under which the agency shifts federal funding authority out of accounts that are not on course to use up their allotted “obligation limitation” for the year – redirecting it to where state recipients are ready to use it.

That’s down slightly from the more than $4.18 billion the FHWA redistributed last year in FY 2018 funds, which was a record-setting amount.

Joung Lee, policy director for the American Association of State Highway and Transportation Officials, explained that the reason for these annual “redistributions” is that the FHWA makes estimates at the start of each fiscal year about how much of the highway dollars the agency will commit under various program categories.

Then, as summer rolls around and actual spending patterns become more clear, agency officials redistribute unused obligation limitation from some underspending categories so that state DOTs can apply it in the few remaining weeks of the fiscal year to other projects.

Lee added that, besides the formula funding states receive directly from the Highway Trust Fund each fiscal year for capital projects, the FHWA also makes start-of-year estimates for broad national purpose program areas including the USDOT’s Infrastructure for Rebuilding America or INFRA program, plus the government’s subsidy costs of Transportation Infrastructure Finance and Innovation Act or TIFIA project loans, and the federal lands account, among others.