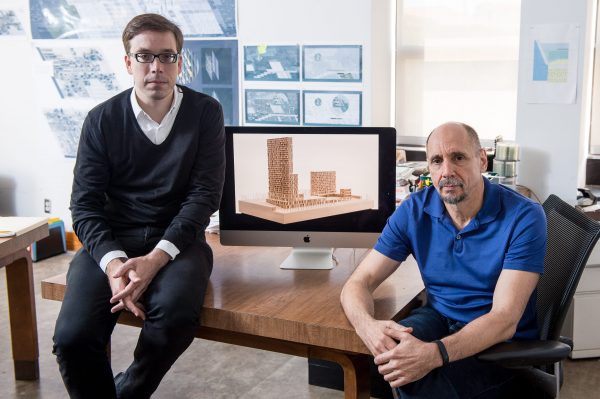 HOUSTON – Rice University has won a share of $1 million in grants by the Department of Agriculture’s U.S. Forest Service to support the construction of mass timber buildings on college campuses.

The $100,000 grant will help Rice navigate the planning and approval process for its first mass timber construction, replacement of the 1957 “new wing” of Hanszen College. The proposed five-story, 50,000-square-foot building would incorporate residential space with 165 beds as well as common areas.

“Mass timber” refers to the use of engineered wood products as the structural components in construction including load-bearing beams, panels and posts. They largely replace concrete that, during manufacture, is a significant generator of carbon dioxide, a greenhouse gas.

The university has expertise through Rice Architecture professors Jesús Vassallo and Albert Pope, whose model of a timber skyscraper for Detroit was accepted to the 15th International Architecture Exhibition at the Venice Biennale in 2016. Vassallo has also been honored by architecture firm Shepley Bulfinch for his “Tall Timbers” graduate course.

Vassallo and Pope were ahead of the curve in their concern for environmentally friendly construction. “These grants are really to help push these projects over the line,” said Vassallo, a collaborator on the grant who will oversee public outreach, including a lecture series on wood construction, and help Rice as plans move forward.

“Many times, (clients) ask you for a comparison: What happens if we make it with timber versus with concrete, or framing or some other system,” he said, noting local permits, fire regulations and available expertise on timber can be stumbling blocks.

Aside from the environmental benefits, he said having Houston’s first mass timber structure on campus will provide an unparalleled educational opportunity for architecture students. “We want to take advantage of that,” he said.

In its grant proposal, the team saw the Hanszen project as providing “the perfect opportunity to catalyze a new, sustainable mode of design and engineering that reflects Rice’s commitment to becoming carbon neutral by 2038.”

“This parallels our architectural research, so that’s one of the rationales for us wanting to build with timber,” said Ditman, who first heard Pope make the case for mass timber in a 2014 Scientia lecture. “We’re teaching this, so we should be willing to do it.”

Rice is among the nation’s top 10 universities in a new ranking of sustainability research by the Association for the Advancement of Sustainability in Higher Education. Johnson said the federal grant validates the university’s long-standing efforts toward environmental responsibility.

“Rice as an institution is committed to becoming carbon neutral, and the Rice School of Architecture is a recognized leader in mass timber research,” he said. “In my view, constructing a mass timber building on the Rice campus, where it can contribute to pedagogy and research as well as be a visible representation of our climate commitment, makes perfect sense.”

Johnson noted Rice and timber have been partners since before the campus existed. Profits from the Rice Land Lumber Co., established with the purchase of 50,000 acres of Louisiana land by William Marsh Rice in the 1800s, helped finance construction of the first buildings at Rice, including Lovett Hall.

“That has been a key part of Rice’s endowment since the very beginning and remains part of Rice’s portfolio today,” Johnson said. “In fact, we have a small sum in the grant to enable the managers of that forest to make a determination about market viability of their particular timber product to potentially be used as mass timber.

“If you think about it, there’s the possibility that, over time, we could start growing our own buildings,” he said. “How cool would that be?”

The Department of Agriculture, through the U.S. Forest Service, awarded similar grants to nine other academic institutions, including two others in Texas: San Jacinto College in Pasadena and Stephen F. Austin College in Nacogdoches.

The new building would replace the existing 120-bed “new wing” of Hanszen College. (The original wing has been renovated since the 1957 addition.) Construction is pending approval by Rice’s Board of Trustees and its Buildings and Grounds subcommittee.