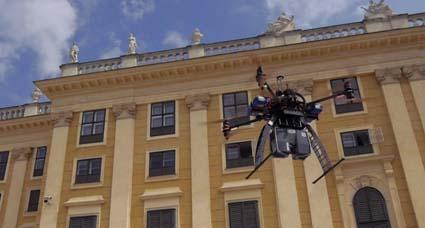 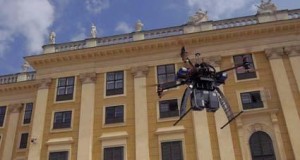 FARO Technologies, Inc. (NASDAQ: FARO): One of the stars at the FARO 3D Documentation User Meeting was indisputably the prototype of the flying FARO Laser Scanner Focus3D. Many of the participants pulled out their cameras or mobile phones when the multicopter prototype was carried into the room by its two developers. Then on the second day of the event, the participants witnessed the world premiere: the high-tech flying machine took off live. The test flight provided an insight into how it will in future also be possible to produce precise laser scans from a bird’s-eye view. The experts’ get-together in the Congress Centre in Strasbourg, France, offered plenty of exciting topics such as this, as well as new discoveries.

Around 200 participants from around the world – from Alabama to Sweden – used the opportunity to speak with like-minded colleagues and experts from various specialist fields. Newcomers to the world of laser scanning were able to get some technical tips and discover new opportunities for laser scanning marketing. Experts had the opportunity to exchange experiences, to further enhance their knowledge and to network. Over 40 practical workshops and special presentations inspired and provided the basis for discussions that followed. Users provided insights into their experiences, the day-to-day challenges and new solutions associated with the key issues of architecture and civil engineering, protection of historic monuments and mobile mapping. The dazzling opportunities offered by the technology constantly came to the fore – whether used underground, on the surface and not least in the air. It became clear that the technology is now gaining ground in many sectors and industries.

For example, the participants of the 3D Documentation User Meeting were given a tour of the 150-year-old London Underground system. As a result of virtually continuous train operations and around 3.2 million passengers per day, surveying the tunnels and stations has proven very difficult. Laser scanning with the FARO Focus3D provides a quick solution for this project. Because of its tremendous range of 120 metres, this compact device makes detailed scans possible in otherwise inaccessible areas. Presentations relating to laser scanning in the context of the renovation of buildings also aroused great interest. One of the presentations described the elaborate survey undertaken to repair an architectural highlight in France, which had been largely destroyed by fire. As no single part of the burnt interior panelling was the same as any other, 3D scans were the quickest and easiest solution on which to base the reproduction of the original. For that purpose, the FARO Focus3D had to be mounted on an extension, because the fire had primarily raged at a great height of the unusually shaped assembly hall.

The second day of the user meeting was devoted to the 3D documentation of archaeological finds and historic buildings, for example in Sicily and Barcelona. Lazare Grenier, who has completed the 3D documentation of the cathedral in Nîmes, France with his company Art Graphique et Patrimoine even described three-dimensional laser scanning as a powerful tool for cultural heritage preservation in his presentation.

Current industrial applications also didn’t come up to short during the two-day event. One presentation looked at the technology’s great potential for planning efficient vehicle production. This involves full 3D models of the factory buildings in which the processes of vehicle production can be simulated and tested. Applications in hazardous environments were also on the agenda.

FARO’s team of experts and numerous partner companies also presented current software solutions and trends associated with the processing and visualisation of scans. For example, FARO offers new and useful apps in its 3D App Center, which allow scans to be edited in certain ways even more easily. The company will soon also launch a cloud-based version of its WebShare program. This will allow scan data to be retrieved and edited from anywhere, while not taking up any of the users’ server capacity.

“Every time, the FARO 3D Documentation User Meeting brings together important experts who can keep each other up to date and inspire one another. They all share a great enthusiasm about the various possibilities of 3D technology”, said Ralf Drews, Managing Director FARO Europe, summing up the two days of intensive discussion. Next year FARO will organise a 3D Documentation User Meeting in Europe again.

More information about the event can be found at http://user-meeting.faro.com.

About FARO
FARO is the world’s most trusted source for 3D measurement technology. The Company develops and markets computer-aided measurement and imaging devices and software. Technology from FARO permits high-precision 3D measurement, imaging and comparison of parts and complex structures within production and quality assurance processes. The devices are used for inspecting components and assemblies, production planning, documenting large volume spaces or structures in 3D, surveying and construction, as well as for investigation and reconstruction of accident sites or crime scenes.