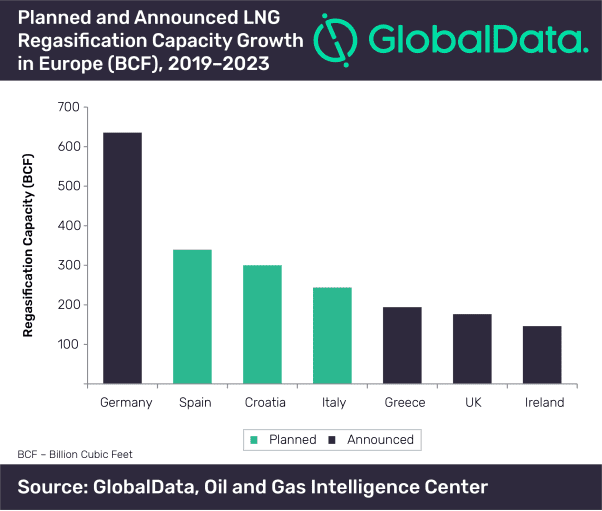 Germany is expected to drive capacity growth in Europe’s liquefied natural gas (LNG) regasification industry from planned and announced (new-build) projects during the outlook period 2019 to 2023, contributing around 31% of Europe’s total growth, according to GlobalData, a leading data and analytics company.

The company’s report, ‘LNG Regasification Industry Outlook in Europe to 2023 – Capacity and Capital Expenditure Outlook with Details of All Operating and Planned Regasification Terminals’, reveals that Germany is expected to have new-build regasification capacity of 635 billion cubic feet (bcf) by 2023.

Dipayan Chakraborty, Oil & Gas Analyst at GlobalData, comments: “Wilhelmshaven Floating and Brunsbuttel are the two upcoming announced regasification terminals in Germany during the 2019 to 2023 period. Both the terminals are expected to start their operations in 2022, with the Wilhelmshaven Floating terminal expected to add the highest regasification capacity of 353bcf by 2023.”