Cliff Henke on September 6, 2019 - in Articles, Feature, Featured
When Los Angeles hosts the Summer Olympic Games in 2028, city officials are hoping its zero-emissions bus fleet will share a bit of the spotlight with the world’s best athletes.

Los Angeles Metropolitan Transportation Authority (Metro) is starting the journey to create a comprehensive Zero Emissions Bus Program through an analysis of its network of 165 bus and bus rapid-transit routes and 12 maintenance facilities. The goal is to convert to a complete zero-emissions bus fleet by 2030.

To achieve that goal, a joint venture known as ZEBGO Partners, which includes WSP USA and STV, currently is working with Metro to prepare a master plan that will provide a year-by-year schedule to help Metro achieve a 100-percent zero-emissions bus fleet. When completed and adopted, the master plan will make recommendations for the gradual procurement of a new bus fleet as well as identify step-by-step modifications at facilities necessary to support the fleet.

The 29-month Zero Emissions Master Plan started in October 2018. ZEBGO Partners combines the resources and expertise of WSP and STV, two firms with extensive experience delivering large transportation projects in Los Angeles County and an understanding of this rapidly growing technology. Seven other speciality firms also are part of this large and diverse team. The master plan will incorporate the need for training, safety planning, disaster planning and cyber-security for the bus fleet.

Metro has set a very ambitious schedule, as it will have to procure and deliver about 240-250 buses per year to meet its goal. To date, it’s the largest commitment to a zero-emissions bus fleet in the United States and one of the largest in the world.

The data gathered for this plan will account for a lot of variables, including climate, elevation, length of routes and stops. The real-world data collected from buses today will be used to predict how the zero-emissions buses will do on those routes in a variety of conditions.

Metro has three options to consider for its zero emission bus fleet:

1. Battery buses, which are charged overnight or while in transit.

2. Fuel-cell buses, which use hydrogen as the fuel, creating a chemical reaction that generates electricity.

3. Electric trolley buses, which use overhead wires to power the vehicle, similar to what’s currently found in San Francisco and Seattle.

It’s likely that Metro will adopt a battery bus fleet. If it chooses this option, modifying the facilities to accommodate battery-powered buses will be a major part of the project, as they will need to work with electric utilities to connect charging stations to the grid.

Cost remains the biggest obstacle to a battery bus fleet. Although the price of electricity for vehicles is improving, it still can be two to three times as expensive to operate a battery-powered bus compared to a comparable gasoline-powered vehicle. That differential has made the transition a difficult one to consider for many U.S. transportation agencies.

One of the Biggest Challenges

Most U.S. electric utilities aren’t set up to provide transit agencies with favorable rates necessary to make emission-free buses a practical economic option. If that hurdle can be cleared, it could prove to be the difference-maker in whether or not more transportation agencies can make the change.

As part of the master plan process, the ZEBGO team’s experts are coordinating with utilities to show them how they would benefit from making their power more affordable to Metro as well as the benefits for people who depend upon regional public transportation. Fortunately, the last several years have seen a gradual narrowing of the cost difference between electric vs. conventional diesel vehicles, and the difference is anticipated to drop another 10-15 percent a year during the next several years.

As the master plan creates a timetable for transition to a fully electric fleet, planners also are evaluating current bus routes throughout Los Angeles to determine if they need to be modified to accommodate these vehicles. Facilities need to be capable of handling the anticipated fleet, with provisions such as the equipment needed to cool the charging units. It also will take an enormous amount of infrastructure planning to bury the power lines to the recharging stations and create the cooling system for the charging units. The master plan will assess facilities, routes and how these buses will behave en route.

Another key challenge the master plan will address centers around the battery-charging capabilities for each zero-emissions bus. Electric buses today are capable of traveling about 200 miles per charge, which may be a little short for some of the existing routes. Because current technology doesn’t allow for full 300 miles in practice, the ZEBCO team is looking at options, including the need for layovers or the purchase of additional buses. 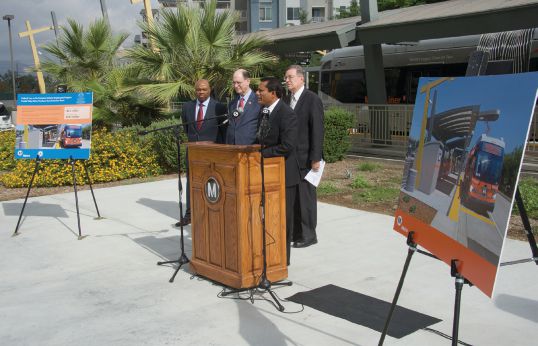 One area where strides have been made is with the time it takes to fully charge a battery. Right now it requires a three- or four-hour charge, but not too long ago the same battery would require a four- or five-hour charge. Although it would be more efficient to complete an entire bus route on one charge, the buses are designed with batteries that can easily be removed and replaced with freshly charged batteries, minimizing the time a bus would be out of service.

The master plan also will anticipate what conditions will be like after 2030; but since technology improvements are a moving target, approaches are continually adapted to accommodate those evolving conditions. For example, it will one day be possible to remove and replace batteries while a bus is in operation. But until that day arrives, the master plan will lean on the conservative side, with projections that set realistic expectations while accommodating future technology. 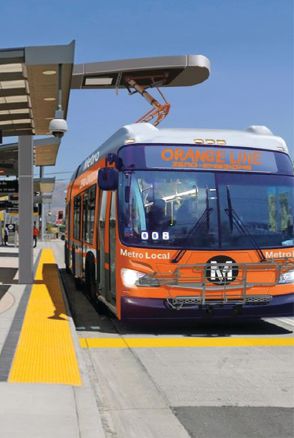 A rendering shows the proposed overhead charging system for the Metro Orange Line Electric Bus Program that would charge buses such as this New Flyer Xcelsior XE60 articulated battery-electric bus.

To meet current and future needs, the master plan will assess the need to modify facilities along the bus routes to provide maintenance facilities that eventually will allow for upgrades to support en route charging of electric buses when the technology arrives.

A driving force behind the progress of a zero-emissions bus fleet in Los Angeles has been its widespread public support. The master plan is being driven by economics, but the project has received a lot of public and political support at county as well as state levels due to its environmental benefits, which certainly helps keep things progressing forward.

Successful implementation of a zero-emissions bus fleet in Los Angeles should serve as a template for other urban centers in the coming years. Certainly, as demand grows and more manufacturers become comfortable with the technology, the operating costs for these buses should continue to drop. Not only will utilities be more adept at supporting these vehicles, but microgrid strategies also could help with battery charging.

Advances in smart technology will help the network evolve and adapt into a more-efficient and responsive system for commuters. The ability for vehicles to be monitored for passenger information, real-time dynamic monitoring and vehicle-to-vehicle technology also will work their way into these buses.

Los Angeles Metro operates the second-busiest bus system in the United States, with about 900,000 boardings a year. Eliminating the diesel-fuel fleet would have a substantial impact on the air quality and environmental well-being of the Los Angeles region, and its implementation and success could influence other metropolitan areas to follow suit.

It will take a gold-medal effort from everyone involved to achieve Metro’s goal of having the zero-emissions bus fleet largely completed and in operation for the 2028 Olympics. But it’s on the right track, and with continued public support and improvements in technology, it’s worth watching its progress and success—and hopefully its eventual expansion to other U.S. cities.

Cliff Henke is senior program manager for the Los Angeles Zero Emissions Bus Program. He is an assistant vice president and senior analyst for WSP USA in the Los Angeles office; email: Cliff.Henke@wsp.com.