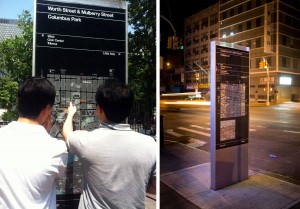 New York City Department of Transportation (DOT) Commissioner Janette Sadik-Khan today announced the initial installation WalkNYC, the agency’s comprehensive wayfinding sign system starting in Chinatown, the first step towards a citywide pedestrian information system that will provide New Yorkers and visitors with critical navigating information making it fast, simple and convenient to get around. The free-standing signs installed directly into sidewalks and in subway stations, will feature clear, readable maps showing area streets, major points of interest, travel information such as bike lanes and subway stations, as well as estimated walking times for pedestrians. Following the installation of these four initial signs at key intersections in Chinatown, the wayfinding signage will be installed at key crossings elsewhere in the neighborhood next month and expand to 34th Street and the Garment District in Midtown; Prospect Heights and Crown Heights near Prospect Park in Brooklyn; and Long Island City, Queens, in August. Installation in these neighborhoods will mark the first phase of a multi-platform wayfinding system which will expand to neighborhoods across the city and provide an instantly recognizable and user-friendly mapping system for millions of New Yorkers and tourists. With 31% of all trips in New York City made by foot, and 22% of all car trips under one mile, New York City is an ideal location for launching a comprehensive pedestrian wayfinding system to further encourage walking throughout the city.

“You don’t need to be a tourist to feel turned-around on New York’s street and this first-ever unified pedestrian sign system is a step in the right direction,” said Commissioner Sadik-Khan. “Whether on the sidewalks or before emerging from the subway, these signs will bring a common language to our streets and help knit together our neighborhoods.”

“The launch of this new pedestrian navigation system will provide New Yorkers as well as millions of tourists who visit our city each year directly with the information they need to access some of the greatest attractions and essential venues we have to offer,” said Council Member Jimmy Van Bramer. “As Long Island City is integrated into the launch of this wonderful system we will be able to highlight one of New York City’s hottest neighborhoods for all to see. With some of the city’s best cultural institutions and arts organizations, Western Queens’ offers a wide array of venues that will once and for all put Long Island City on the map for good.”

“We look forward to WalkNYC signs guiding the misguided and lost in and around Chinatown to discover our wealth of shops and restaurants,” said Wellington Chen, Executive Director of the Chinatown BID and Partnership.

“WalkNYC is another excellent initiative by NYC DOT that joins its growing list of much-needed pedestrian-focused projects in New York,” said Dan Biederman, president of the 34th Street Partnership. “It is a world-class way-finding system that was thoroughly researched and designed, and we are proud to welcome it to the 34th Street District.”

“WalkNYC will make it easier than ever for pedestrians to navigate New York and encourage them to experience everything our neighborhoods have to offer,” said Barbara Blair Randall, president of the Fashion Center BID. “This initiative is not only good for visitors–it’s good for businesses, too, and we’re thrilled to be part of the initial installation.”

“We are delighted to have secured funding for this important project,” said Mindy Duitz, Interim President, Brooklyn Children’s Museum. “The pedestrian signage will help us serve even more children and families in the world’s first museum for children.”

“This signage will help orient visitors and newcomers to the neighborhood, as well as encourage exploration between various destinations in LIC,” said Gayle Barron, Executive Director of the Long Island City Partnership. “Since we don’t have a typical grid system, navigating the streets in LIC can sometimes be confusing. As the community partner on the project, we are excited to bring this valuable new program to Long Island City.”

The first phase of the WalkNYC program will include approximately 100 free-standing signs measuring 18, 34 or 50 inches wide and between approximately 8½ feet high. Each design features an intuitive, “heads-up” map oriented in the direction the viewer is facing, providing a clearer guide to nearby destinations. The design also displays compass directions, neighborhood destinations and nearby transit connections for easy reference. The design is the result of a 2011 request for proposals (RFP) and the selection of a design by PentaCity Group, a collaboration among wayfinding specialists City ID, industrial designers Billings Jackson Design, graphic designers Pentagram, GIS database developers and cartographers, T-Kartor, with engineering and urban design by the RBA Group.

The system has been approved by the Public Design Commission and the Landmarks Preservation Commission for citywide application. The WalkNYC maps have also been incorporated into the more than 300 Citi Bike stations that have been installed in Manhattan below 59th Street and portions of Brooklyn extending from DUMBO to Bedford-Stuyvesant, and will be found on additional stations as the bike share program expands, extending the reach of this comprehensive wayfinding system.

The WalkNYC program was developed largely with Federal grants and DOT’s partners brought funding to the program for fabrication and installation within their areas. DOT is also working with additional business improvement districts and other local partners to expand the wayfinding program to neighborhoods around the city, and plans to install signs in Manhattan below Houston Street this fall. The agency is also working with the MTA/New York City Transit to include specially-designed Select Bus Service (SBS) wayfinding signs featuring the same heads-up map displays as well as countdown clocks for SBS arrival times based on the MTA’s BusTime service, making these high-quality bus services even more convenient for thousands of users. Installation of these SBS signs will begin on the 34th Street line as well as the planned Nostrand/Rogers line later this year. Additionally, the agency is working with the MTA to bring similar wayfinding maps to subway stations across the city, and will be working with partners on providing the open-source mapping information to developers for use in smartphone and Web applications and other potential platforms as well, creating an accessible, universal tool for quickly and easily navigating New York City.

In preparation for developing the wayfinding system DOT conducted more than 500 intercept surveys around the city to determine both residents’ and visitors’ knowledge of local areas and confidence navigating on foot. Questions included: How familiar are you with this area?; Which way is North?; and Have you been lost in New York recently? Results indicated that 13% of New Yorkers were not familiar with the area in which they were surveyed, and 14% and 27% of residents and visitors, respectively, were unable to name the neighborhood or borough they were in at the time of the survey. Further, 33% of locals could not indicate which direction North was, and nearly 10% admitted being lost in the past week.

By improving the walking experience for New Yorkers and visitors, DOT expects to increase the number of pedestrian trips, potentially reducing vehicular congestion and increasing foot traffic for local businesses and services, in addition to improving public health through making easy and obvious healthy behaviors like walking.  WalkNYC is a complementary addition to the many pedestrian and public space improvements that the City has instituted in the past six years with the intention of laying the groundwork for a healthier city for years to come. WalkNYC will help to make New York City’s world-class streets even more accessible through an information system that provides users critical information about their surroundings and enables them to navigate the city easily and with confidence.

For additional information about the WalkNYC program, please visit nyc.gov/dot.