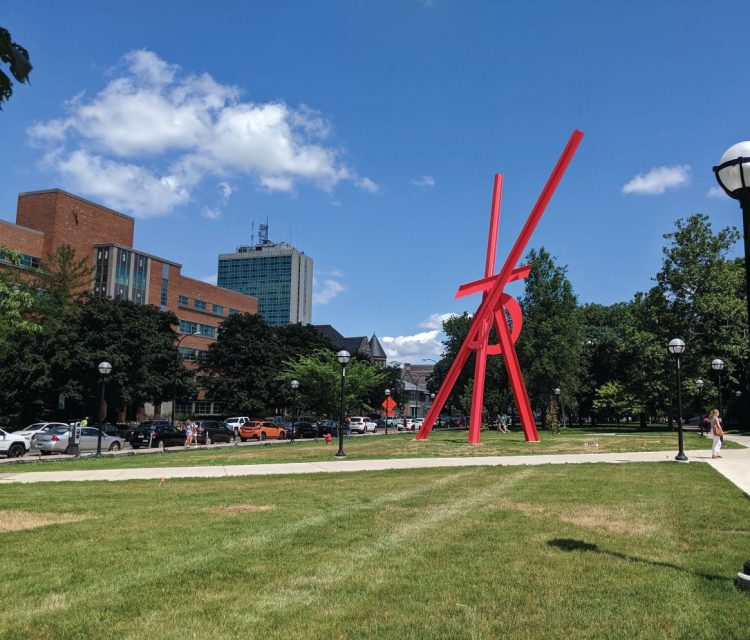 The system protects university buildings from potential floods while benefiting the environment and the city of Ann Arbor.

The University of Michigan’s Central Campus is a gathering spot for students and visitors. It’s also a stormwater collection point in the downtown Ann Arbor, Mich., area, particularly during large storm events. A new underground stormwater infiltration system was designed to protect the campus and adjacent historic buildings from a 100-year storm event while providing additional capacity in the established university and city stormwater systems.

“The new system improves water quality by removing stormwater flows that may contain sediment and nutrients that would otherwise flow to the Huron River and ultimately Lake Erie,” says John Kosco, senior environment, health and safety professional with the university’s Department of Environment, Health & Safety. 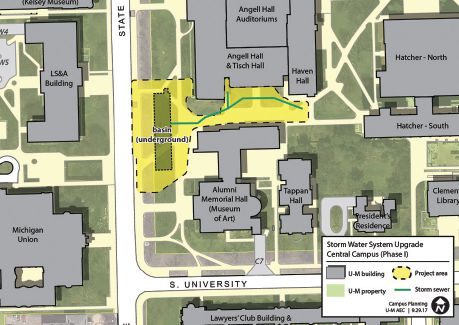 Buildings in the area have historically flooded when runoff overwhelms the Allen Creek Drain and associated city of Ann Arbor storm sewer system, which includes the storm sewer outlet for the university’s “Diag” stormwater piping system. The Diag is a large open space in the middle of the university’s Central Campus and derives its name from the many sidewalks running near or through it in diagonal directions. It’s one of the busiest sites on campus, hosting a variety of events such as outdoor concerts, fundraisers, demonstrations and picnics. With this project, nine acres of stormwater flow from the west side of the Diag was redirected to the infiltration system.

The university, along with the project engineer, CDM Smith-Detroit, developed a long-term stormwater management plan for the area. The new stormwater system follows other stormwater-management initiatives the university has implemented such as rain gardens, green roofs, porous surfaces, and infiltration or holding basins. Each of these techniques provides water-quality improvements by removing sediment and nutrients that would ultimately flow into the Huron River Watershed, a highly protected watershed covering 908 square miles, including seven southeastern Michigan counties. 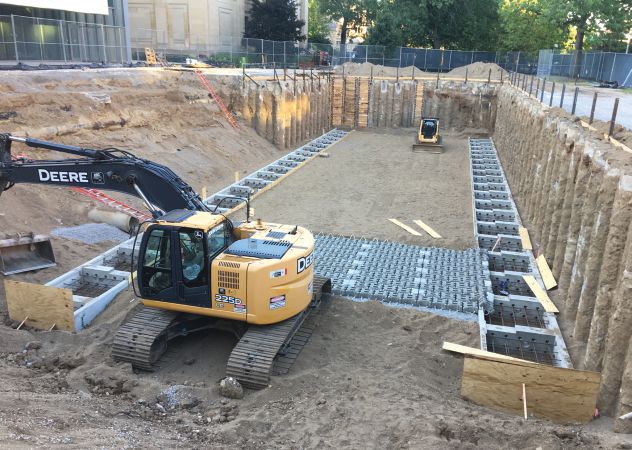 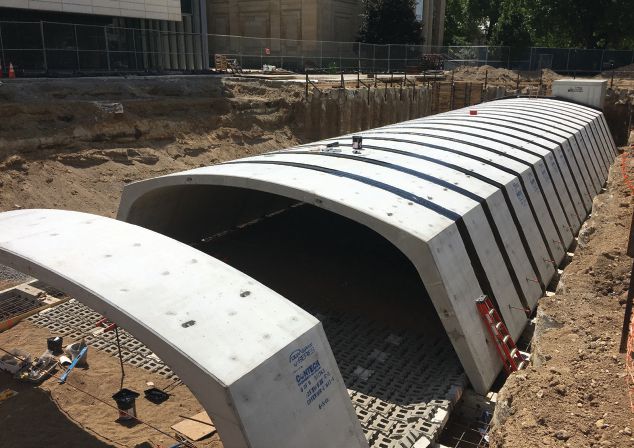 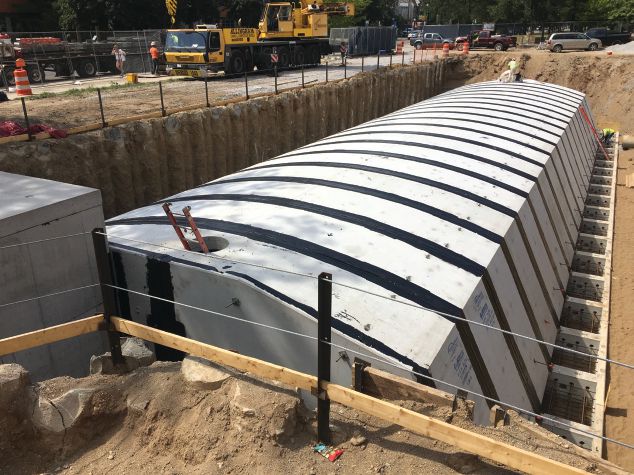 The infiltration system can accommodate approximately 750,000 gallons of water at a time, which equates to 1.75 feet of water covering a football field. 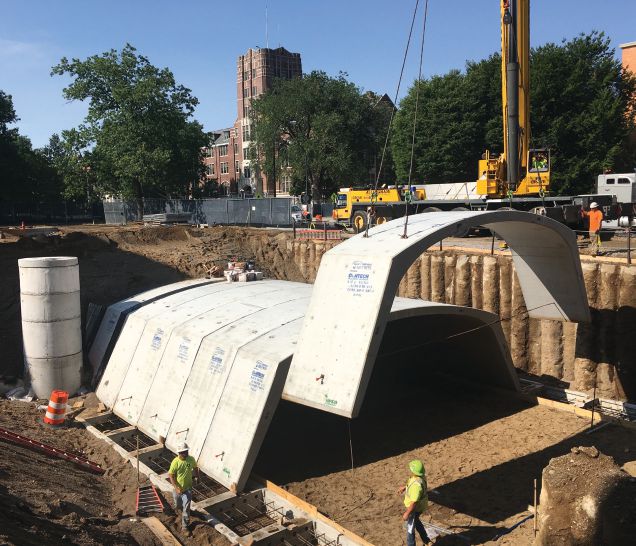 The project’s CDS Hydrodynamic Separator (far left in the above image) is an 8-foot modified concrete manhole that uses swirl concentration and a continuous deflective separation device (below) to screen, separate and trap trash, debris, sediment and hydrocarbons from stormwater runoff. The power of the incoming flow is harnessed to continually shear debris off the screen as well as direct trash and sediment toward the center of a separation cylinder. 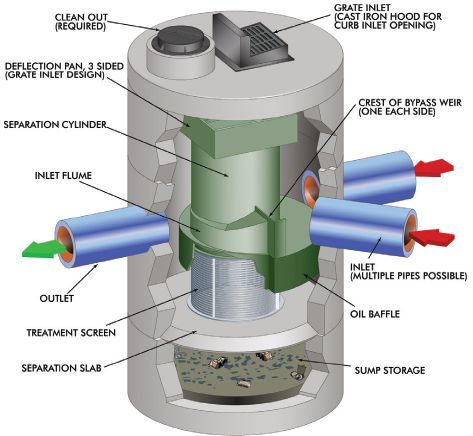 The $4.5 million system was installed under the lawn between State St., Angell Hall and Tisch Hall, and Alumni Memorial Hall. Construction began shortly after commencement in summer 2018 and was completed before students came back to school in fall 2018.

CDM Smith and the university developed the system with Contech Engineered Solutions to control the quality and quantity of runoff leaving the site. First, stormwater is directed through a Contech CDS Hydrodynamic Separator, a concrete pretreatment structure that removes trash, debris, sediment and hydrocarbons from stormwater runoff. For this application, the system was designed to treat the first inch of a storm event, targeting 80-percent total suspended solids removal for a mean particle size distribution of 110 microns. This level of pretreatment significantly reduces loading and maintenance of the downstream infiltration system.

Treated water then flows to a Contech CON/SPAN underground infiltration system, a modular, precast, three-sided concrete arch system designed to provide large-volume stormwater detention or infiltration below grade. Based on the results of a geotechnical report, the system’s design was calculated using an infiltration rate of 25 inches per hour, with specific locations onsite that consist of predominantly granular material (natural sand with trace silt/clay content).

The team determined the CON/SPAN O-Series Model O535 optimized the site’s 185- by 45-foot footprint along South State St. near Angell and Alumni Memorial Halls while providing the needed storage capacity. The Model O535 has a span of 35 feet with a rise of 10.8 feet. The system’s 29 arch units were provided with an average lay length of 6 feet with pick weights of 21.2 tons each. Specific units were adapted to allow for an inlet, two manhole access points and connection of two precast end walls.

For speed of installation, the CON/SPAN units were placed on EXPRESS Foundations, a unique foundation system that combines the speed of precast concrete with the economy of cast-in-place construction. Contech was able to reduce the length of the EXPRESS Foundations to allow for onsite excavators to lift and place the foundation pieces without requiring a crane. This reduced the crane rental by one week and resulted in significant installation cost savings.

“Basically, the entire stormwater system in that area was redeveloped to drain to this system,” notes Ryan Loeprich, the state bridge consultant for Contech in Michigan.

The project presented several difficulties. The first challenge was designing a system to manage 750,000 gallons during the largest stormwater events while providing a large natural infiltration area. The second challenge was developing such a large underground basin in the limited open space at Central Campus while minimally affecting existing buildings and infrastructure. A large painted steel sculpture, “Orion,” had to be removed, but it was reinstalled when the project area was restored.

“We had to develop a system that would work in a very tight footprint,” adds Loeprich. “The size of the infiltration bed was unique, but the concrete structure allowed us to meet the project’s infiltration and storage needs.”

The team also had to develop a construction and staging plan to work around the busy downtown, the school’s summer activities and the nationally renowned annual City of Ann Arbor Art Fair. The onsite contractor, Site Development, completed the entire project within a 10-week period without interfering with the art fair and finishing prior to the 2018 fall semester. A two-stage construction approach was used to complete about half the system, including backfilling, prior to the art fair, then shifting to the second half after the fair was over and adequate room was available. Contech engineers worked closely with Site Development, CDM Smith and the university throughout the design and construction process, providing design, review, onsite technical assistance and specifications support.

“This project aligns well with the university’s broader goal of sustainability,” explains Branko Kerkez, assistant professor of civil and environmental engineering at the University of Michigan. “By proactively building stormwater solutions that reduce flooding and improve water quality, the university can play an important role in being a pivotal community member
and watershed steward.”