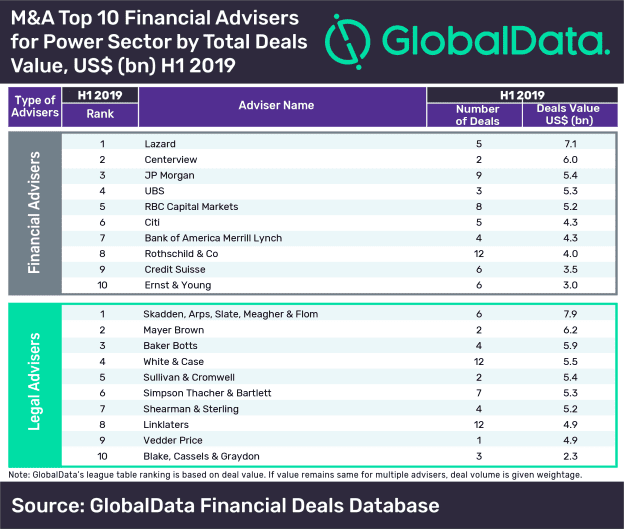 Lazard has topped the latest mergers and acquisitions (M&A) league table of the top 10 financial advisers for the power sector based on deal value in the first half (H1) of 2019, according to GlobalData, a leading data and analytics company.

The financial advisory and asset management firm advised on five deals worth US$7.1bn, including the big ticket deal of Infrastructure Investments Fund’s acquisition of El Paso Electric for US$4.3bn.

According to GlobalData, which tracks all M&A, private equity/venture capital and asset transaction activity around the world to compile the league tables, Centerview stood at second position with just two deals, worth an impressive US$6bn, while JP Morgan finished at third with nine deals worth US$5.4bn.

Tokala Ravi, Financial Deals Analyst at GlobalData, says: “Infrastructure Investments Fund’s acquisition of El Paso Electric helped Lazard and Skadden to lead the tables of financial and legal categories, respectively. Despite advising on 12 transactions each, Rothschild & Co in the financial category and Linklaters in the legal category settled at eighth position due to low-value transactions.”

GlobalData league tables are based on the real-time tracking of thousands of company websites, advisory firm websites and other reliable sources available on the secondary domain. A dedicated team of analysts monitors all these sources to gather in-depth details for each deal, including adviser names.

To ensure further robustness to the data, the company also seeks submissions from leading advisors, through an adviser submission forms on GlobalData, which allows both legal and financial advisers to submit their deal details.