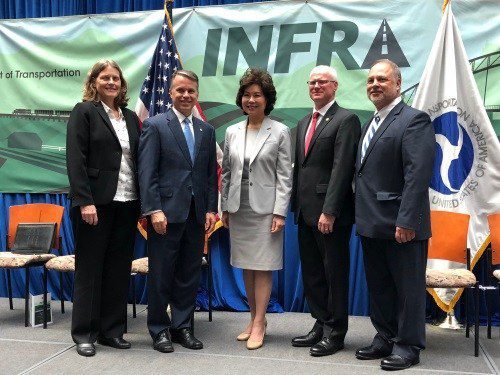 As reported by the AASHTO Journal: https://aashtojournal.org on July 29, 2019 - in Financial, News

The U.S. Department of Transportation officially awarded nearly $856 million worth of Infrastructure for Rebuilding America or INFRA grants to fund 20 projects across the country during a special event at its Washington, D.C. headquarters on July 25 – with 12 state departments of transportation winning grants for a variety of highway, railroad, and bridge replacement undertakings.

This second round of INFRA grants – which follows $1.5 billion awarded last June to 26 transportation projects – now undergoes a 60-day Congressional review period before the money can be released.

“This significant federal investment will improve major highways, bridges, ports, and railroads around the country to better connect our communities and to enhance safety and economic growth,” said Transportation Secretary Elaine Chao (seen at right) in a statement.

Sen. Blunt and Rep. Graves specifically pointed to the $81.2 million grant being provided to the Missouri Department of Transportation to help defray the cost of “two critical upgrades” along I-70; a $238 million effort that includes replacing the 60-year-old Rocheport Bridge over the Missouri River, now nearing the end of its service life, and building 1.2 miles of east-and west-bound truck “climbing lanes” to improve traffic flow.

“That INFRA grant money will allow Missouri to free up millions of more dollars to invest in other transportation projects across the state,” Rep. Graves said.

The other state DOT projects funded during this second round of INFRA grant awards include:

Nicole Nason, administrator of the Federal Highway Administration, explained to the AASHTO Journal at the event that the “detailed criteria” required to apply for INFRA grants is helping to “sharpen up” the analytics skills of state DOTs, which then provides USDOT with far more “transparent details” regarding the economic benefits of specific transportation projects.

“The grant process gives us a very detailed spreadsheet we can take before Congress during the review period, so we can show precisely why we selected the projects we did,” she said. “It allows us to move from broad, vaguely defined benefits such as ‘reducing traffic congestion’ to more specific criteria, especially in the areas of using innovative materials and quality of life improvements.”

Nason added that improving transparency when comes to INFRA project criteria and the program’s selection process is just one of the recommendations laid out in a recent Government Accounting Office report.

“But it also helps when it comes to explaining why a grant proposal didn’t succeed,” she pointed out. “We have 20 grant winners out there who are very happy, but we also have to go back and explain to 180 others why their applications did not result in grants.”

The INFRA program – established by the 2015 Fixing America’s Surface Transportation or FAST Act – prioritizes freight-related highway projects, though some limited rail and port infrastructure is allowed as long as it reduces congestion on highways.

The law specified that 10 percent of the funds be available for small projects valued at $5 million or more, while large projects must be at least $25 million. Furthermore, at least 25 percent of the overall INFRA grant program funding must go to rural projects.