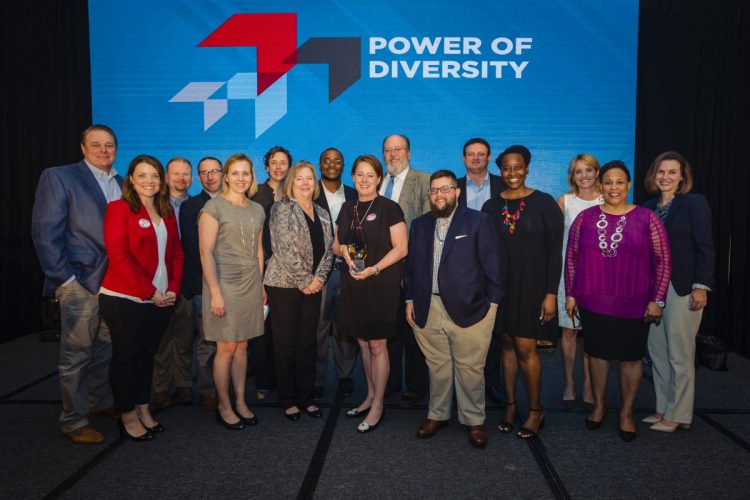 With a global footprint as an infrastructure solutions leader, Black & Veatch has committed to workplace diversity and inclusion more reflective of the more than 100 countries on six continents in which the company has offices. The 104-year-old engineering, procurement and construction giant now proudly announces that those efforts are being recognized.

During the Greater Kansas City Chamber of Commerce’s annual “Power of Diversity” breakfast, Black & Veatch was named winner of the “Champion of Diversity” award, presented to a regional business “that has made a durable commitment to embracing diversity in their workplace, diversity supplier partnerships, and the community.”

“We champion that a diverse, inclusive workplace reflects our clients and the world, contributing directly to our success. We accept this award as a testament to that,” Edwards said, noting that research shows that companies with more diverse workforces perform better financially and are more innovative. “But the bottom line is that our emphasis on diversity and inclusion is simply the right thing to do.”

Black & Veatch has taken strong steps to foster D&I, developing training around implicit and unconscious bias, and encouraging and raising participation in employee resource groups (ERGs). The company recently welcomed an intern class that included more women, veterans and people with disabilities and ethnic backgrounds over previous years. When Ingram’s in May named Black & Veatch as one of the publication’s best companies to work for – among other things for its D&I focus – Edwards called the company’s valuing of differences across its workforce its competitive strength.

“The fact that we’re employee-owned can and should give rise to varying voices that make us more innovative, imaginative and competitive,” said Stephanie Hasenbos-Case, Black & Veatch’s Chief Human Resources Officer under whom an internal advisory board is being developed to advise, guide and put into play D&I initiatives that will then be monitored. “We’re bringing out the best in our people by embracing different backgrounds and perspectives, but more work remains.”

The chamber said the award is given to a business that demonstrates adherence to practices that support the business case for workforce diversity as a strategic initiative by ensuring that the diversification of staff, suppliers and community outreach is a normal part of their organizational practice, policy and culture. Such practices are inclusive regardless of race, national origin, religion, age, disability, genetic information, sexual orientation, gender identity, or marital or military status.

“We’re thrilled to name Black & Veatch as this year’s `Champion of Diversity,’” said Joe Reardon, the chamber’s president and CEO. “Their commitment to diversity and inclusion is having a positive impact in Greater Kansas City and at their offices worldwide. (Edwards) set the tone from the top down when he signed the CEO Action pledge, but members of the Black & Veatch team are going above and beyond when it comes to offering inclusive health benefits, creating employee resource groups that reflect the company, leading the way in supplier diversity, and overall evolving how they do things on a daily basis.”