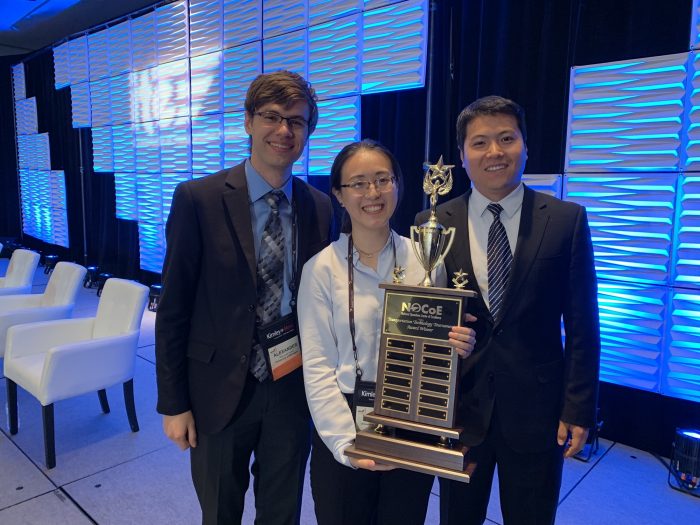 Fast facts:
– A student team from the University of Michigan won the second annual Transportation Technology Tournament.
– The students presented a solution designed to reduce congestion on I-75 and I-696 in Metro Detroit.
– The tournament took place during the Institute of Transportation Engineers (ITE) Annual Meeting in Austin, Texas.

A student team from the University of Michigan (U-M) was announced as the winners of the second annual Transportation Technology Tournament by the National Operations Center of Excellence (NOCoE). The team’s presentation on a solution to reduce congestion on I-75 and I-696 in Metro Detroit was selected as the winner by a panel of private and public sector judges. The tournament was held during the Institute of Transportation Engineers (ITE) Annual Meeting in Austin, Texas.

The winning presentation, Corridor Management in the I-75/I-696 Influence Area, focused on mitigating heavy, peak-hour traffic volumes on I-75 between Detroit and Troy and on I-696 in Oakland and Macomb counties. The team’s proposal included a supply-focused solution to managing the flow of vehicles and a demand-focused solution to reduce car trips by using shuttles and carpooling to the area’s major employers.

“Innovation and imagination are key to solving 21st century transportation problems, especially in this time of limited resources for all road agencies,” said State Transportation Director Paul C. Ajegba. “I want to commend these students on their vision and ingenuity in tackling two of the most congested freeways in Michigan. I also congratulate the other finalists for the quality work they presented. These are the kinds of future transportation professionals this country will be depending on in the decades to come.”

The Transportation Technology Tournament is a partnership between the United States Department of Transportation (USDOT) and NOCoE, a Washington, D.C.-based nonprofit organization that provides resources to the transportation systems management and operations (TSMO) community by connecting them with best practices and experts to save lives, time and money. The NOCoE is a partnership of the American Association of State Highway and Transportation Officials (AASHTO), the ITE, and the Intelligent Transportation Society of America (ITS America), with support from the Federal Highway Administration (FHWA).